The second Houthi attack on Abu Dhabi in just a week marks a new escalation in Yemen's civil war. 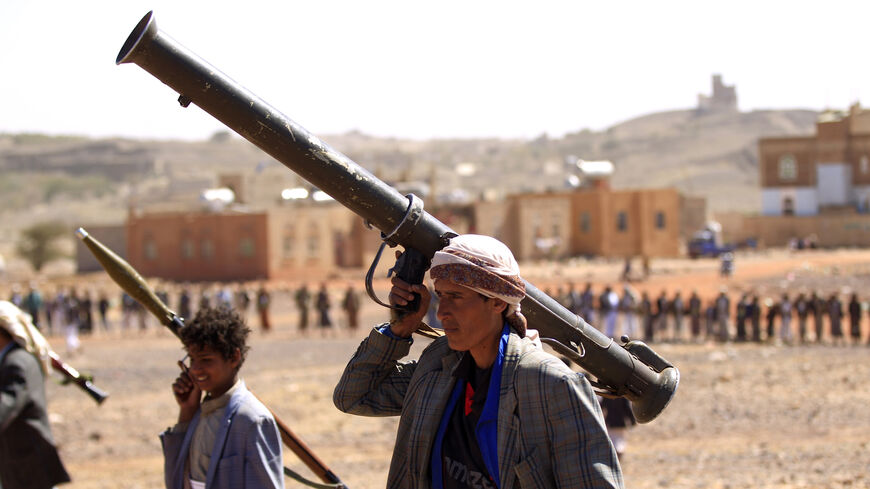 A Yemeni man carries a rocket launcher as he takes part in a gathering near the capital Sanaa to show support for the Shiite Houthi movement against the Saudi-led intervention on Feb. 21, 2019. - MOHAMMED HUWAIS/AFP via Getty Images

The United Arab Emirates and US military personnel intercepted two ballistic missiles fired by Yemen’s Houthi rebels toward an airbase housing US troops on Monday.

No one was hurt in the attacks but debris from the missiles landed near Abu Dhabi, according to a statement by the Emirati Defense Ministry.

US military forces at al-Dhafra airbase outside Abu Dhabi fired Patriot missiles to help bring down the projectiles, US Central Command confirmed Monday.

“The combined efforts successfully prevented both missiles from impacting the base,” Urban said.

The Houthis claimed responsibility for targeting the base, which houses some 2,000 US military personnel and the US Air Force’s 380th Air Expeditionary Wing. Spokesperson Yehiya Sarie also said Dubai was targeted with “a large number of drones.”

Saudi Arabia, which has frequently come under ballistic missile and drone barrages by the Houthis, also was targeted by at least one Houthi missile on Monday. The Saudi-led military coalition involved in Yemen’s civil war said the projectile was shot down.

Monday’s barrage is the second attack on the UAE claimed by the Houthis in just a week, marking a new escalation outside Yemen’s borders in the seven-year-old conflict.

Pentagon spokesperson John Kirby on Monday said US defense officials will be “looking into the possibility that this [attack] was directed at our forces.”

“It would be foolish not to assume that there was a threat to our people,” Kirby said.

A US military official speaking on the condition of anonymity told Al-Monitor that the Patriot systems at Al Dhafra would likely not have fired if the missiles were targeting areas outside the base.

Last Monday the Houthis claimed credit for a drone and cruise missile attack that blew up fuel tankers and killed three people in Abu Dhabi. It was the first strike claimed by the Houthis to have been confirmed to have successfully hit the UAE. Saudi Arabia was also targeted last Monday, but those projectiles were likewise shot down, the coalition said.

The Emirates temporarily banned commercial and private drone flights in the country on Saturday in the aftermath of the attacks.

The Saudi-led military coalition, of which the UAE is a major member, launched a blitz of airstrikes targeting sites in Yemen’s capital Sanaa last week in response to the attacks.

At least 87 people were killed when the coalition bombed a prison at Saada in Yemen’s north last week, Doctors Without Borders’ director in the country told the Associated Press. The Saudi-led coalition also bombed Hodeidah, with women and children reportedly among the dead.

The Arab League convened on Sunday and urged the UN Security Council to “take a decisive and unified stance against Houthi attacks on Saudi Arabia and the UAE.”

US President Joe Biden indicated last week his administration would consider reinstating the terrorist group designation for the Houthis, which was repealed last year amid objections from aid groups who said the label inhibited humanitarian work.