France is also lending military support while it remains unclear how proactively US fighter pilots will allowed to engage Houthi targets. 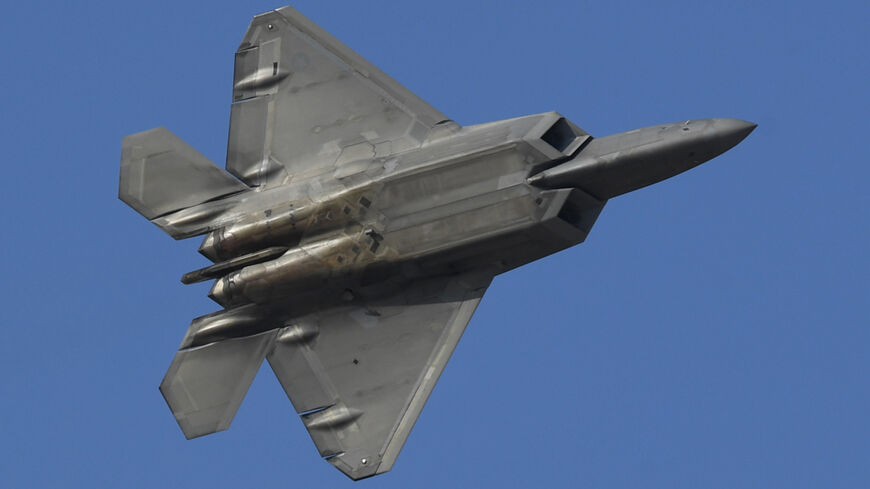 A US air force F-22 fighter jet is seen at an event during the Dubai airshow in the United Arab Emirates on Nov. 17, 2019. - KARIM SAHIB/AFP via Getty Images

US F-22 fighter jets arrived in the United Arab Emirates over the weekend in a show of military support from Washington following recent missile and drone attacks launched into the Gulf country by Yemen’s Houthi rebels.

American F-22 Raptor pilots from the 1st Fighter Wing based at Joint Base Langley-Eustis, Virginia, landed at Al Dhafra Airbase outside Abu Dhabi on Saturday to assist the Emirati military in defending against the attacks, the US Air Force announced.

The F-22 is the United States’ premier fifth-generation fighter jet designed for air-to-air combat. The commander of all US forces in the Middle East, Gen. Kenneth “Frank” McKenzie, told reporters last week that the aircraft has “one of the best look-down radars in the world” that can identify land attack cruise missiles and drones. The top US Air Force commander in the region, Lt. Gen. Greg Guillot, said in a statement that the aircraft was “ideally suited” for the task.

The deployment comes as the US Navy has dispatched the USS Cole, a guided-missile destroyer with anti-ballistic missile capabilities, to the UAE.

The Cole will patrol Emirati waters after a port call in Dubai, McKenzie told the Emirates News Agency last week.

Abu Dhabi and Dubai have been targeted by a string of Houthi drones and ballistic and cruise missile attacks in recent weeks, marking a surprise escalation in Yemen’s civil war.

The attacks came after a UAE-backed pro-Yemeni government militia known as the Giants Brigade contributed to battlefield gains against the Houthis, recapturing Shabwa province last month in a setback for the rebels’ offensive against the government-held stronghold of Marib.

A Houthi missile attack on Jan. 17 killed three people and wounded seven others near Abu Dhabi, marking the first confirmed successful Houthi attack against the Emirates since it joined the Saudi-led military coalition to fight the Yemeni rebels on behalf of the ousted government in Aden in 2015.

Two subsequent attacks claimed by the Houthis late last month targeted Al Dhafra Airbase outside Abu Dhabi, spurring American troops to seek shelter and US Patriot missile defense systems to fire in response. Neither of those attacks caused any reported casualties, though one occurred during a high-profile visit by Israel’s President Isaac Herzog to the UAE. Al Dhafra houses some 2,000 US troops, but the Pentagon has stopped short of saying the Houthis were targeting them.

“Medium-range ballistic missiles that were fired from Yemen and entered the UAE were not invented, built [or] designed in Yemen,” McKenzie told reporters traveling with him to the Gulf region last week. “All that happened somewhere else. So, I think we can certainly see the Iranian connection to this,” the general was quoted as saying.

The reach of the Houthis’ missiles appears to be advancing, and they may not be the only group to have targeted the UAE recently.

On Feb. 2, an ostensible militant group in Iraq calling itself the “Righteous Promise Brigade” claimed credit for launching four drones toward Abu Dhabi. Later that day, the Emirati Defense Ministry said it knocked down three hostile drones that entered the country’s airspace. The same group claimed credit for a drone attack on the royal palace in Saudi Arabia’s capital last February.

The proliferation of cheap drone technology and Iranian-designed projectile weapons among Iran-backed groups in the Middle East has ended decades of complete US air superiority in the region, McKenzie told members of Congress last year.

US officials are working with regional governments and private sector firms to develop technology to address the problem, McKenzie emphasized during his stop in the UAE last week.

Meanwhile, the Biden administration is redoubling its diplomatic efforts to bring Yemen’s warring parties to the negotiating table in a bid to end the war. “There is no military solution to the conflict in Yemen,” Timothy Lenderking, the top US envoy for Yemen, said during a think tank event on Monday.

The Houthis’ yearlong offensive in Marib “has been the primary obstacle to peace efforts,” Lenderking said during the event. “However, Houthi recent losses in Yemen should indicate to them — and to all the parties — that there is no military solution.”

The Biden administration has barred US military forces from participating in offensive operations inside Yemen, fulfilling a campaign promise to disentangle the United States from the war. Yet it remains unclear whether the American F-22 pilots will be targeting Houthi weapons over UAE airspace alone. The most effective way to defend against drone and missile attacks is to knock them out before they are fired, or "left-of-launch," as McKenzie pointed out last week.