UAE-backed forces are making sweeping gains against the Houthis despite the rebels' threats against Abu Dhabi. 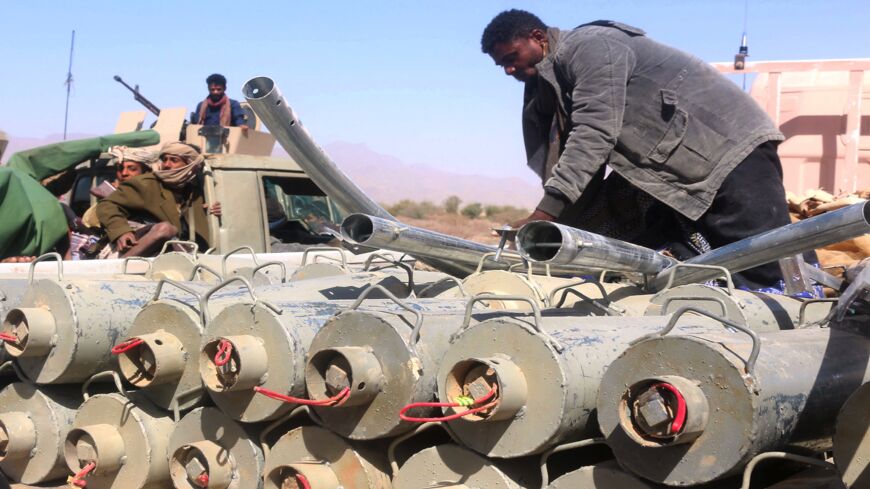 Yemeni pro-government fighters surround ordnances removed from the district of Harib on Jan. 25, 2022, after Yemen's Houthi rebels were expelled from the key battleground district by UAE-trained Giants Brigade fighters. The Iran-backed Houthis lost Harib district south of Marib, the government's last northern stronghold they have been fighting to seize for months. - SALEH AL-OBEIDI/AFP via Getty Image

Pro-government forces in Yemen are pressing their new momentum against Houthi rebels in the oil-rich Marib province.

A pro-government militia backed by the United Arab Emirates announced Tuesday that it had taken control of Harib, Marib province’s second-largest district.

The progress comes after the tribal militia, known as the Giants Brigade, was instrumental in the Yemeni government’s seizure of neighboring Shabwa province from the rebels earlier this month.

The move has pushed the Houthis farther from the embattled strategic city of Marib in a remarkable turnaround of the rebels’ sweeping gains in recent years. Much of the fighting is now reportedly taking place south of the city.

The offensive continued despite warnings by the Houthis to renew missile attacks on the UAE.

The Iran-backed rebels launched two missile strikes on Abu Dhabi in a week, killing three people in the first confirmed attacks by the Houthis on UAE soil.

On Monday the rebels targeted Al Dhafra Air Base, which houses some 2,000 US troops and an Air Expeditionary Wing, with two ballistic missiles. The projectiles were knocked down by US and Emirati air defenses.

The Saudi-Emirati military coalition backing Yemen’s government in the war launched a spate of airstrikes in response to last week’s missile attacks, which also targeted Saudi Arabia, albeit unsuccessfully.

The bombings killed at least 70 people, according to Doctors Without Borders, including dozens at a prison at Saada in Yemen’s north. UN envoy Hans Grundberg called it the “worst civilian casualty incident” in the war in three years. The coalition rejected claims it targeted the prison.

The coalition’s blitz also knocked out internet service across Yemen, which was restored yesterday after a four-day blackout.

The Houthis on Wednesday responded to the attacks by launching a ballistic missile into a residential area of Marib. The ssociated Press cited local officials as saying at least five civilians were killed and 23 others, including five children, had been wounded.

The Biden administration has redoubled its so-far fruitless diplomatic effort to wind down the war, sending envoy Timothy Lenderking back to the region to discuss ways forward. Emirati officials also have said they will continue to push for a cease-fire in the conflict in the hope it leads to a political resolution.

Meanwhile, Abu Dhabi is pressing the United States to redesignate the Houthis as a terrorist organization, a move that international aid groups say would inhibit desperately needed humanitarian support to the war-torn country.