Women and children died in a series of coalition airstrikes on Friday that targeted a migrant holding center in Sadaa and a telecom hub in Hodeidah, aid agencies said. 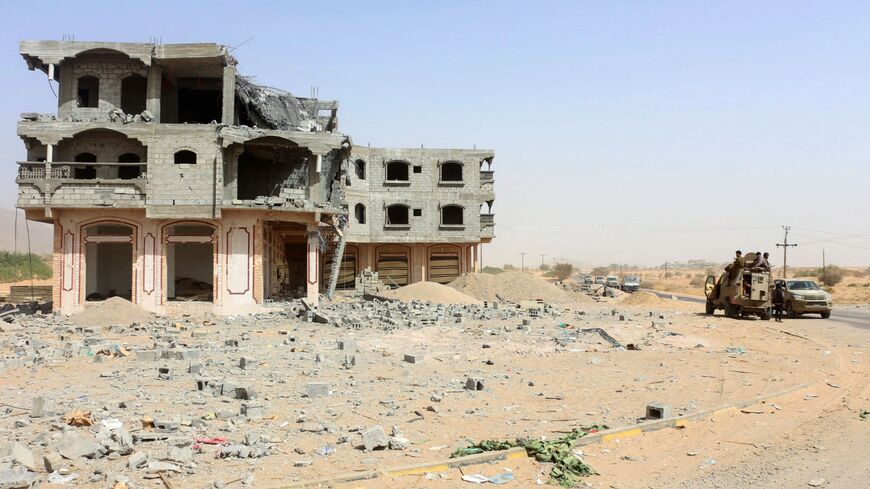 Vehicles and fighters of UAE-trained troops of the Giants Brigade patrol at the Harib junction of the Bayhan district in Yemen's Shabwa governorate, on Jan. 19, 2022. - SALEH AL-OBEIDI/AFP via Getty Images

Saudi-led airstrikes on Friday killed more than 70 people, including women and children, in the Yemeni cities of Hodeida and Saada, aid agencies said. The casualty count is expected to climb as paramedics dig through the rubble.

The airstrike that targeted a Yemeni detention center in the northern city of Saada killed and injured more than 100 people on Friday, most of them migrants, rescue workers said.

“The initial casualties report from Saada is horrifying,” said Save the Children’s country director in Yemen, Gillian Moyes. “Migrants seeking better lives for themselves and their families, Yemeni civilians injured by the dozens, is a picture we never hoped to wake up to in Yemen.”

Doctors Without Borders said the hospital in Saada has received around 200 people injured in the strike and that many bodies still remain at the scene. Hospital staff are “so overwhelmed that they cannot take any more patients,” the medical charity said.

"It is impossible to know how many people have been killed,” said Ahmed Mahat, Doctors Without Borders' head of mission in Yemen. “It seems to have been a horrific act of violence."

Separately on Friday, the coalition acknowledged conducting “accurate airstrikes to destroy the capabilities of the militia” in the Yemeni port city of Hodeida. Three children in Hodeida were also killed while playing in a football field, aid workers said.

The Norwegian Refugee Council described the strike on the telecom building as “a blatant attack on civilian infrastructure that will also impact our aid delivery.”

The Saudi-led bombing campaign comes days after the Houthis carried out a drone and missile attack on the United Arab Emirates on Monday, killing three people in Abu Dhabi. The coalition responded on Tuesday with retaliatory airstrikes in the Houthi-held capital of Sanaa that reportedly killed as many as 20 people, including civilians.

The fighting between the Houthis, who expelled the internationally recognized government in Sanaa in 2014 and now control most of northern Yemen, and the Saudi-led military coalition backing the government has created what the United Nations describes as the world’s worst humanitarian crisis.

According to Save The Children, an escalation in the seven-year conflict resulted in a 60% increase in civilian casualties in the last three months of 2021. Member states of the UN Human Rights Council voted last year to end the mandate of the Group of Eminent Experts, which investigated war crimes and other abuses in Yemen.