According to Mwatana, a majority of the civilians who died in coalition airstrikes last year were women and children. 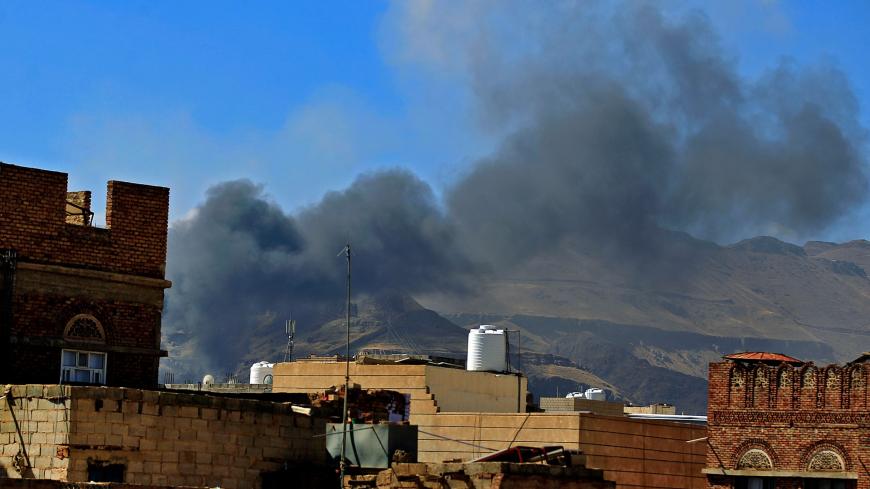 Smoke billows following a reported airstrike by the Saudi-led coalition in the Yemeni capital, Sanaa, on Nov. 27, 2020. - MOHAMMED HUWAIS/AFP via Getty Images

The Saudi Arabia-led air war in Yemen was responsible for nearly 100 civilian deaths in 2020, according to a new report released amid an 11th-hour effort from the Trump administration to sell more arms to the kingdom.

Coalition airstrikes in Yemen killed at least 99 civilians, including 44 children and 15 women, said a 2020 analysis released Tuesday from the independent Yemeni monitoring group Mwatana. At least 81 civilians were injured in air attacks last year, a majority of them also women and children.

Since intervening on behalf of Yemen’s internationally recognized government in 2015, the Western-backed Arab coalition has launched thousands of airstrikes targeting the Iran-aligned Houthis, who wrested control of the capital and are now the de facto authorities throughout much of the country.

Over half a decade of civil war has killed more than 100,000 people and created what the United Nations calls the world's worst humanitarian crisis. Another deadly year in Yemen ended with a rocket attack that killed and injured dozens at an airport in the southern city of Aden on Dec. 30, which the Saudi-backed government blamed on the Houthi rebels.

The report, which is based on nearly 2,000 interviews with victims, eyewitnesses and on-the-ground health care and nongovernmental organization workers, documented human rights violations committed by all parties to the conflict, including the Houthis, forces loyal to Yemeni President Abed Rabbo Mansour Hadi and the Emirati-backed Southern Transitional Council.

“Violations and attacks have continued for the past six years, each time causing new and more profound damage and reinforcing the urgent need to immediately move ahead towards accountability and redress,” said Mwatana chairperson Radhya Almutawakel.

“Yemeni men and women desperately need states to stand with justice, and activate real pathways towards accountability for perpetrators and redress for victims.”

The new report comes as the outgoing Trump administration presses ahead with arms sales to Saudi Arabia, despite concerns from lawmakers over the Gulf monarchy’s human rights record, the murder of Washington Post columnist Jamal Khashoggi and the country's conduct in Yemen.

Last week, the Pentagon's Defense Security Cooperation Agency notified Congress of the possible sale of 3,000 Boeing-made small-diameter GBU-39 bombs to Saudi Arabia in a deal valued at $290 million. The department described the potential sale as one that supports “US foreign policy and national security objectives by helping to improve the security of a friendly country.”

In addition, Bloomberg reported in December that the State Department informed lawmakers that it planned to issue a license for Raytheon to directly sell Saudi Arabia 7,500 precision-guided, air-to-ground munitions worth $478 million.

In May 2019, the administration cited the threat posed by Tehran when circumventing Congress to push through an $8.1 billion arms sale to Saudi Arabia, the United Arab Emirates and Jordan. The president also vetoed a measure aimed at ending support for the Saudi-led coalition in Yemen, which includes logistical assistance and intelligence sharing.

President-elect Joe Biden has pledged to end US involvement in Yemen's war, as well as reassess the longstanding Saudi relationship. His administration is also expected to restore humanitarian assistance to Houthi-held northern Yemen, which the White House slashed last year over concerns the rebels were interfering with aid distribution.