The move to go forward with a proposed $290 million sale of precision-guided bombs for Saudi Arabia comes just weeks before the Biden administration arrives. 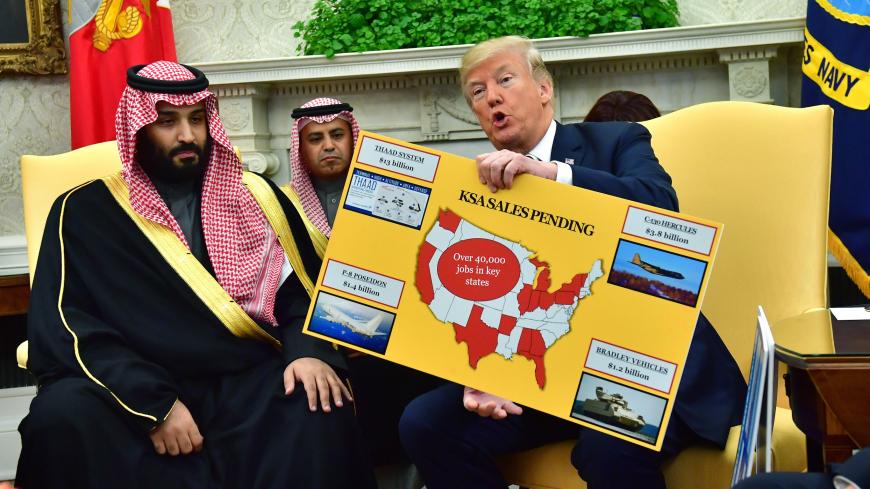 President Donald Trump holds up a chart of military hardware sales as he meets with Crown Prince Mohammed bin Salman of the Kingdom of Saudi Arabia in the Oval Office at the White House on March 20, 2018, in Washington, DC. - Kevin Dietsch-Pool/Getty Images

The US State Department approved a proposed $290 million sale of 3,000 precision-guided GBU-39 Small Diameter Bombs to Saudi Arabia on Tuesday. The Royal Saudi Air Force has relied on such US-made munitions for its air campaign over Yemen. The kingdom has drawn allegations of war crimes for repeatedly bombing civilian targets.

President-elect Biden has promised to end US support for the Saudi-led coalition’s war against Yemen’s Houthi rebels.

Congress was formally notified of the sale proposal on Tuesday, a week after Bloomberg reported that the Trump administration told lawmakers it was moving ahead on plans to grant a license allowing Raytheon to sell 7,500 precision-guided bombs directly to Saudi Arabia.

The Pentagon on Tuesday also announced a $4 billion sale of eight Apache AH-64E helicopters to Kuwait and the upgrade of 16 of the Gulf country’s existing Apaches. Spare parts for Kuwait’s Patriot air defense missile batteries and targeting systems for Egyptian military aircraft were also announced.

The United Nations has called Yemen’s civil war the world’s worst humanitarian catastrophe and said that a majority of civilian casualties in the conflict have been caused by the Saudi-led military coalition, which includes the United Arab Emirates.

Estimates of the war’s civilian death toll vary, but the nongovernmental research group ACLED has reported that more than 12,600 civilians have been killed in targeted attacks.

UN investigators have warned that governments arming any side in the conflict — including Iran, which has ties to the Houthi rebels, and the United States, United Kingdom and France, which have supported the Saudi-led coalition — may be complicit in war crimes.

The US military has said it has worked closely with Saudi Arabia to reduce civilian casualties in the conflict. The United States stopped refueling Saudi coalition planes over Yemen in 2018, but Riyadh has since continued to hit civilian targets.

The United States is seeking to pressure the Houthis in Yemen's civil war. The State Department has reportedly considered labeling the Houthis a terrorist group in recent weeks, a potential move that former US officials and rights groups have protested, saying it would threaten to end desperately needed international humanitarian aid to Yemen's north.

Trump administration officials have been urging Middle Eastern leaders to sign peace agreemens with Israel — collectively known as the Abraham Accords — that aim to shore up cooperation to counter Iran’s regional activities. Thus far, four countries — the UAE, Bahrain, Sudan and Morocco — have agreed to normalize ties with Israel. Saudi Arabia has so far held out.

In a separate move, Washington’s embassy in Baghdad on Wednesday announced the United States had transferred 30 armored Humvees to Ain al-Asad air base in order to assist Iraqi security forces “in securing the heart of Baghdad.”

That transfer comes ahead of the one-year anniversary of the US assassination of Iranian Maj. Gen. Qasem Soleimani, for which Iran and local proxy militias in Iraq have vowed retaliation.