The administration has suspended major foreign arms sales in what the State Department characterized as a routine decision. 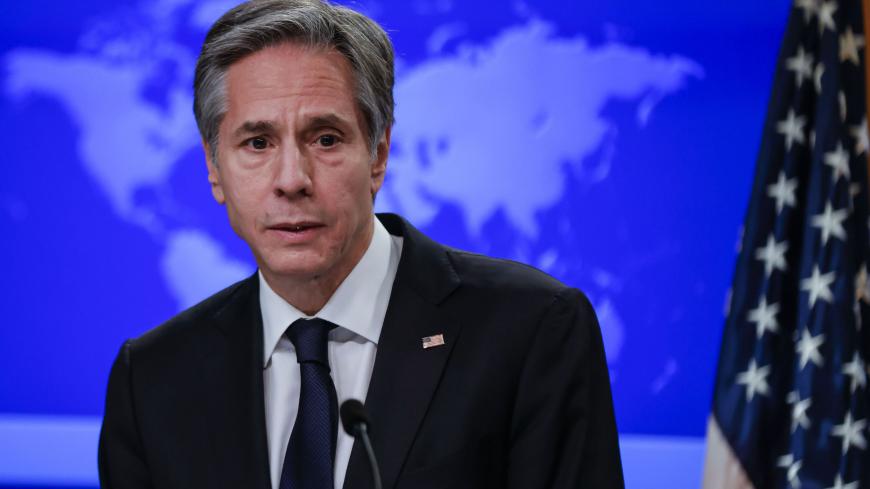 US Secretary of State Antony Blinken addresses reporters during his first press briefing at the State Department in Washington, on Jan. 27, 2021. - CARLOS BARRIA/POOL/AFP via Getty Images

The Biden administration is reviewing billions of dollars in planned arms sales, including deals with the United Arab Emirates and Saudi Arabia, that were pushed through by the Trump administration in its final months.

Secretary of State Antony Blinken on Wednesday declined to comment directly on the paused sales, but described such reviews as routine for any new administration.

“It is typical at the start of an administration to review any pending sales to make sure that what is being considered is something that advances our strategic objectives and advances our US foreign policy,” Blinken said in his first press briefing as America’s top diplomat.

The freeze, first reported by Bloomberg, is in keeping with President Joe Biden’s campaign promises to reevaluate US arms sales to the two Gulf allies. Blinken, when asked during the briefing, didn't say whether he believes an agreement with the UAE will move forward.

“The F-35 package is much more then selling military hardware to a partner,” the Emirati ambassador to the United States, Yousef Al Otaiba, tweeted Wednesday.

The deal would enable “the UAE to take on more of the regional burden for collective security, freeing US assets for other global challenges,” he said.

The pair of arms agreements, which the Trump administration said were aimed at countering Iran’s malign activities in the region, have drawn sharp criticism from human rights groups. More US-made weapons in the hands of Saudi Arabia and the UAE, they warn, could exacerbate the yearslong conflict in Libya, where Abu Dhabi is backing regional proxies in support of renegade commander Khalifa Hifter, and in Yemen, where a Saudi- and UAE-led air campaign against the Houthis has contributed to what the United Nations calls the world’s worst humanitarian crisis.

Scott Paul, Oxfam America’s lead advocate on humanitarian policy, hailed the “critical step” taken by the new administration and called on Biden to permanently halt all arms sales that are bound for Yemen’s war.

“Today’s announcement signals that the Biden administration will take a different course than prior administrations, prioritizing peace, security and dignity for Yemenis rather than Gulf alliances and profits for arms dealers,” Paul said.

Biden has vowed to end US support, including logistical assistance and intelligence sharing, to the Saudi-led military coalition in Yemen — a pledge reiterated by Blinken during his confirmation hearing last week. Trump vetoed past congressional efforts to end US involvement with the coalition, which he viewed as a bulwark against Iran.

William Hartung, the director of the Arms and Security Program at the left-leaning Center for International Policy think tank, called the weapons review a “prudent first step towards reorienting US arms transfer policy.”

“It's time to put human rights and long-term security above narrow economic concerns in deciding which countries should receive US weaponry,” he said.

Also up for review is the Trump administration’s labeling of Yemen’s Houthi rebels as a foreign terrorist organization, which aid groups have warned will hamper relief efforts in the war-torn country. Blinken said Wednesday that the State Department is reviewing a number of foreign policy actions taken late in the Trump administration, including the Houthi designation.

The Biden administration is taking an “urgent and close look” at the move, Blinken said, to ensure the United States is not interfering with the provision of aid in Yemen, “particularly if it doesn’t in any other way advance our policy and objectives.”