Despite a cease-fire among the parties to Yemen's civil war, the Saudi-led coalition announced it had downed three Houthi drones. 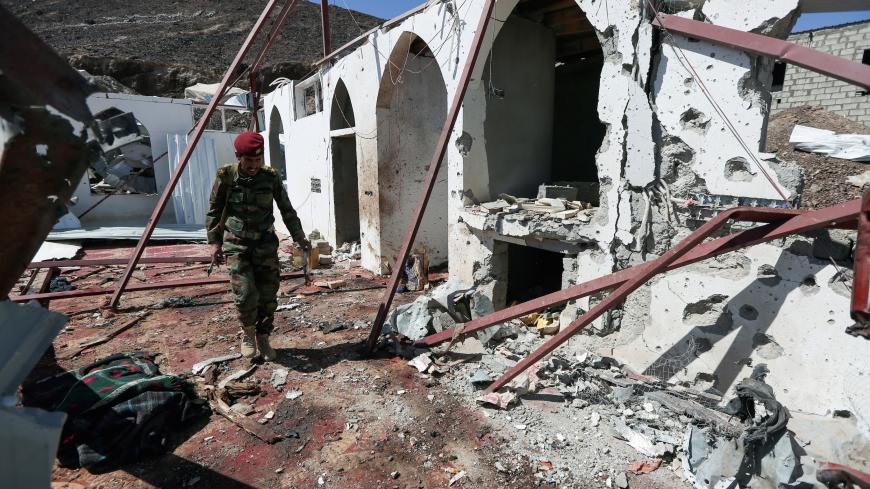 A soldier walks at the site of a Houthi missile attack on a military camp’s mosque in Marib, Yemen, Jan. 20, 2020. - REUTERS/Ali Owidha

Yemen’s warring parties have agreed to their first nationwide cease-fire in four years, part of an effort to fend off calamity should the war-ravaged nation controlled by rival governments be struck by the coronavirus pandemic. No COVID-19 cases have been documented in Yemen so far, but the World Health Organization has warned of an imminent explosion in the number of cases.

The acceptance of a cease-fire by the domestic protagonists and their regional backers was in response to the UN secretary-general’s March 25 call for an immediate end to hostilities. This week marked the fifth anniversary of the Saudi-led coalition’s intervention against Iran-backed Houthi militias in Yemen.

Yet the early signs were hardly promising. The Saudi-led Arab coalition said today that it had intercepted and destroyed three drones launched by Houthi rebels targeting civilians in the towns of Abha and Khamis Mushait in Saudi Arabia.

Repeated efforts at brokering a truce have failed. Since the start of this year, fighting has escalated anew, tipping the balance in the Houthis' favor. The rebels, who call themselves Ansar Allah, have advanced on Marib, the last stronghold and economic lifeline of Yemen’s internationally recognized Government of National Accord (GNA).

The International Crisis Group warned in a briefing that "an all-out battle for Marib could precipitate an enormous humanitarian disaster, as the province hosts at least 800,000 Yemenis already displaced from homes elsewhere. It could also scotch already dwindling chances of a nationwide de-escalation that in turn could lead to talks to end the war.”

The conflict, which has broadly pitted a Saudi-led coalition backed by the UAE, the United States and Great Britain against the Iran-aligned Houthi rebels, has resulted in what the UN calls the world’s biggest humanitarian crisis.

Both the Houthi rebels and the GNA announced flight bans the week before last to staunch the spread of coronavirus. But the Red Cross said it expected aid deliveries to continue via air and sea.

Yemen’s shattered hospitals cannot cope with the pandemic, health groups warn. Yemen-based Mwatana for Human Rights and the New York-based Physicians for Human Rights documented attacks on health care facilities. In a March 18 report, they stated, “One of the most distinctive — and devastating — abuses of the conflict has been attacks on medical infrastructure and health workers.”

According to the Yemen Data Project, which monitors the conflict, nearly a third of all 20,000-plus coalition bombing raids to date have hit civilian infrastructure.

Kristine Beckerle, the legal director for accountability and redress at Mwatana for Human Rights, told Al-Monitor, "Since the period covered by the report, further health facilities have been attacked, further health workers have been harassed, and aid has been blocked and impeded over and over again — and now there is a global pandemic to contend with.” Beckerle added, “The health system is collapsed, people are already sick and starving, and until now, the warring parties, Ansar Allah, the Saudi-UAE coalition, the Yemeni government have gravely exacerbated all the above.”

Children are among the worst affected as cholera and diphtheria swept across the country, claiming thousands of lives. The UN estimates that around 2 million Yemeni children under the age of five suffer from acute malnutrition and disease. As of the 2019 school year, at least as many were out of school as a result of the conflict.

Taha al-Mutawakel, the health minister for the Houthis’ self-declared National Salvation Government, said March 21 that 93% of Yemen’s medical equipment is out of service.

Yet this dire picture failed to sway the Donald Trump administration.

The US Agency for International Development (USAID), one of the biggest donors to UN operations in Yemen, is poised to slash hundreds of millions of dollars in aid to Houthi-held areas.

The move is meant to pressure the Houthis to relax restrictions on humanitarian relief organizations. Washington contends that these restrictions are designed to mask the fact that much of the aid ends up in rebel hands.

“Civilians are caught between the corruption of the Houthis and international donors’ decision to punish the Houthis,” said Afrah Nasser, Yemen researcher for Human Rights Watch.

As a result, “millions of civilians, especially the almost 4 million [internally displaced people], are caught up in an intolerable situation,” Nasser said.

Some 70% of Yemen’s estimated population of 25 million rely on aid for their survival. Some 80% live in territory controlled by the Houthis.

This includes the nation’s capital, Sanaa, which was taken by the rebels in 2014. In March 2015, Yemeni President Abed Rabbo Mansour Hadi was forced to flee to Saudi Arabia. He continues to direct the GNA from Riyadh, but his territory is shrinking.

The International Crisis Group observed that since January, the Houthis “have seized strategic government military bases to the northeast of Sanaa, the rebel-held capital, and swaths of territory in al-Jawf governorate bordering Saudi Arabia, including the provincial capital, al-Hazm.”

Since September, the Saudis have been holding secret back-channel talks brokered by Oman after the Houthis said they would stop drone and missile attacks against Saudi Arabia. Shortly before, the rebels claimed they had struck the kingdom’s largest crude refining facility and an oilfield, which cut production by half. Saudi Arabia and the United States blamed Iran for the attacks.

The kingdom’s crown prince and de facto ruler, Mohammed bin Salman, is widely seen as the architect of Saudi intervention amid fears that Iranian predominance in Yemen would stir trouble among Saudi Arabia’s own minority Shiite population. Saudi Arabia shares a 1,100-mile border with Yemen. But victory has grown ever more elusive.

The Emiratis have started to act independently of the Saudis since last year, pulling out most of their troops and propping up a separatist movement in South Yemen that wants to reestablish the region’s independence.

With oil prices at historic lows, the kingdom has less cash to sink into the Yemen quagmire. The back channel with the Houthis has proved largely fruitless. Hence the Saudis may yet make a virtue of necessity and use the coronavirus pandemic — and this week’s cease-fire — as a way out of the conflict. “For Saudi Arabia, the cease-fire can serve as a very convenient exit without losing face," Nasser said.