Iran-backed Ansar Allah may have ambitions well beyond Yemen. 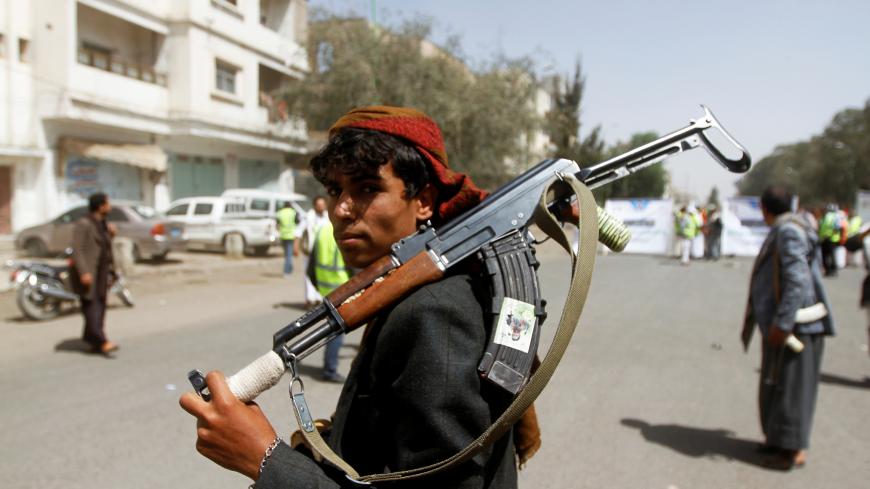 A Houthi supporter looks on as he carries a weapon during a gathering in Sanaa, Yemen, April 2, 2020. - REUTERS/Mohamed al-Sayaghi

As the war in Yemen enters its fifth year, faint hope for an end to the continuing carnage can be felt in large part because of the threat posed by the coronavirus pandemic.

On April 12, United Nations envoys to Syria, Iraq and Yemen, among others, called on warring parties in the region to end hostilities and allow access to medical facilities where needed.

“We call on all parties to engage, in good faith and without preconditions, in negotiating immediate halts to ongoing hostilities, sustaining existing cease-fires, putting in place more durable and comprehensive cease-fires, and achieving longer-term resolutions to the persistent conflicts across the region,” the envoys said in a joint statement.

Yemen recorded its first COVID-19 case April 10. The prospect of the coronavirus spreading is horrifying in a country where the health care system is already in horrific shape.

Saudi Arabia and the United Arab Emirates (UAE), which have been battling the Houthi rebels in Yemen, reacted positively to the call. They announced a cease-fire to help prevent an outbreak, Col. Turki al-Malki, spokesman for the Saudi-UAE coalition, told the Saudi national news agency. The agency noted that the cease-fire gives the Houthis an opportunity to join UN-sponsored talks to end the conflict.

As Amberin Zaman reported, "Since September, the Saudis have been holding secret back-channel talks brokered by Oman after the Houthis said they would stop drone and missile attacks against Saudi Arabia."

The Houthis, officially known as Ansar Allah and backed by Iran, seek an end to the war, but on their terms — including an expanded regional profile that puts them on the bigger map of the Middle East and on the same level with the likes of Lebanon’s Hezbollah in the Iran-led Shiite Axis of Resistance.

In past months, Ansar has been pushing the boundaries of their activities toward the peripheries of their conventional role. Only two weeks after it claimed responsibility for the major Sept. 14 attack on the Aramco oil facilities in Saudi Arabia, the group’s military spokesman openly threatened to attack Israeli posts in Eritrea.

On Nov. 9, the group’s leader, Abdul-Malik al-Houthi, made his first blatant threat against Israel, warning, “Our people will not hesitate to declare jihad against the Israeli enemy and strike the harshest strikes against sensitive targets in the enemy entity if they are involved in any folly against our people.”

Al-Houthi has reiterated his position on several occasions since then, while Israeli officials warned before and after that Iran was seeking a means to hit their country from Yemen. Israel deals with the Houthis as part of the Axis of Resistance. Though there has been no direct Israeli-Houthi confrontation, the latter could strangle passage to the Red Sea through the Bab al-Mandeb strait or by launching missiles, placing Yemen in the middle of the regional equation.

“Ansar Allah’s regional role is clear, as they are one of the pillars of the resistance axis,” Hussain Albukhaiti, a Sanaa-based journalist, told Al-Monitor. Albukhaiti believes the Aramco attack heralded a new status for the Houthis and their affiliated Yemeni military establishment.

And as crises around the region intertwine, the Houthis have offered a rare prisoner exchange in which they would set free a Saudi pilot and some soldiers in return for Riyadh releasing a group of Hamas prisoners it has in custody. Al-Houthi made the offer March 26 in a televised speech.

Journalist Albukhaiti also stressed that the move was not coordinated, yet he elaborated on the pretexts behind the initiative. The Hamas prisoners in Saudi Arabia have been in custody for at least a year, so why broach a deal now and not before?

“Ansar Allah wanted to give some time for other Arab countries to intervene,” he said, adding that the offer also came a few months after the Houthis gained leverage when they downed a Saudi fighter jet and recovered two Saudi pilots without confirming whether they were alive. “This is uncovering a big secret. The pilots were a precious catch. The group said it’s going to release one of them, and that means at least one Saudi pilot is still alive.”

According to a report by Palestinian human rights group Shahed, there are around 50 Palestinians detained for “security reasons” by Saudi authorities. The report, issued in September, provides names, professions and testimonies of family members who mostly link the detentions to charity work aimed at raising funds for families of Palestinians killed by Israel. The oldest among the prisoners is Mohammad al-Khodari, 82, who had been the liaison between Hamas and Saudi Arabia for two decades.

“Khodari was Hamas’ representative in Saudi Arabia. He’s well known to the authorities there, and he was for years the contact point between the two sides,” explained Abu Shanab.

“The swap won’t be the first between Riyadh and Ansar Allah. Still, this initiative might prompt other parties to intervene to spare the Saudis the embarrassment [of appearing to succumb to pressure], though it’s possible that the Saudis might ignore the initiative and keep these people in their prisons.”

Albukhaiti noted that the Saudis don’t often inquire about prisoners of war “and rarely do they act to get them back home.”