If Saudi Arabia and Iran were interested, the confrontation in Yemen could give way to a grand regional bargain. 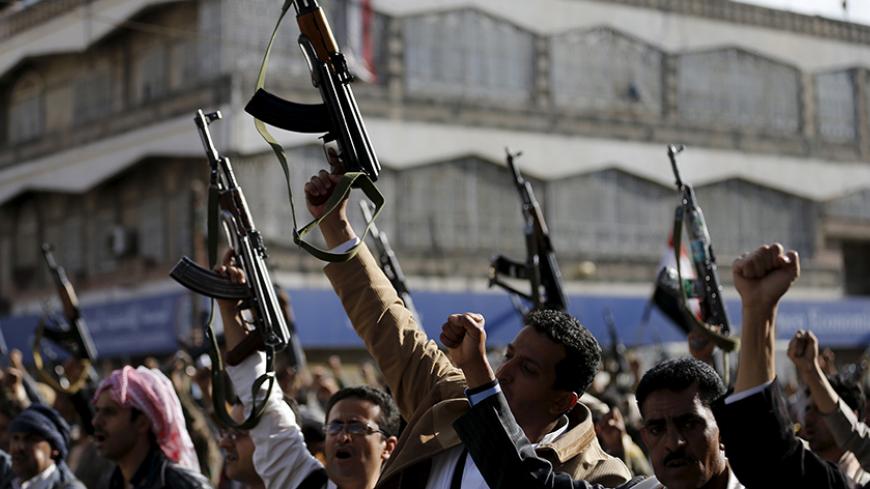 Followers of the Houthis demonstrate against the Saudi-led airstrikes on Yemen, in Sanaa, April 1, 2015. - REUTERS/Khaled Abdullah

Nothing significantly changed in Yemen since the Saudi-led campaign to restore President Abed Rabbo Mansour Hadi to power. Ansar Allah (the Houthis) and forces loyal to former President Ali Abdullah Saleh continue their advance despite aerial and naval bombardment that in the past five days killed at least 93 civilians and wounded 364 in five Yemeni cities engulfed in the violence, including Sanaa, according to the UN human rights office in Geneva.

“Ansar Allah isn't affected at the moment by all the strikes,” said Khalid al-Madani, a Houthi official and a member of the revolutionary committee that is ruling areas under his group’s control. “They are hitting civilians and the army; they know all the army bases because the Americans have the maps. As for Ansar Allah, we are a resistance group, everything is secret, nobody from outside the group knows our posts, we are making use of various experiences, and we have our experience during the past wars [in which] we defended against the former regime in Yemen and the Saudi kingdom.”

During the last couple of days the Houthis were able to capture new areas, including the Dabab port in Taiz that overlooks the strategic Bab al-Mandab strait on the Red Sea, while they continue efforts to impose full control over the southern Yemeni city of Aden, which used to be Hadi’s base. While the second objective could be regarded as a huge blow to the Saudi coalition, the first is expected to raise concerns in Egypt that defends its decision to participate in the war by citing its strategic interests to keep the Suez Canal open.

“They tried to stop us from reaching Aden airport. They failed,” Madani told Al-Monitor over the phone from Sanaa. “I can ensure you there isn’t any significant resistance from Hadi’s forces. Nothing is going to stop us, and the Saudis have to understand that if they want to uproot Ansar Allah then they have to uproot all the Yemenis from their land ... We are arranging and coordinating with the tribes, people believe in us; this is the first answer to the Saudi aggression that’s bound to fail. Whatever they did, the real response is in waiting the orders of Sayyid Abdul-Malik al-Houthi. He’s the one who has the decision."

To get the picture from the other side, Al-Monitor contacted Sanaa-based Yemeni journalist Maareb al-Ward, who's openly against the Houthis. “The situation in Sanaa is terrible. People are afraid and very concerned regarding the daily strikes, people are leaving the capital, especially those living close to army bases.” Because of the closure of the airport and the naval siege a fuel crisis is about to start, he said, adding, “Sanaa is almost empty of people. People are asking what’s next. Yet there is a growing support for the strikes against the Houthis and their ally, former President Ali Abdullah Saleh. That’s because of their policies since they took control on Jan. 22.”

Ward added, “The Houthis have no power without the army’s arsenal; therefore, they are getting weaker day after day. Also the raids on their stronghold in Saada is weakening them.” The Yemeni journalist said those who support the strikes believe it’s the only way to deter the Houthis and force them to hand over the government’s buildings, give up power and become a political party. "Yet it’s important to mention that those opposing strikes other than the Houthis are Saleh’s party, the Socialist Party, the Nasiri Unity Party and other newly formed parties. They are against foreign intervention and see that it only makes things worse and destroys the country,” he said.

An Arab diplomatic source in Beirut told Al-Monitor that such a challenge could be transformed into an opportunity.

“In Yemen, Saudi Arabia is backing the regime against the opposition and in Syria. Iran is doing the same,” he said. “If both Riyadh and Tehran decided to share power in the region, there might be a good chance for a solution. It’s either they want rebels everywhere, or regimes everywhere, let them choose, and let’s get some peace.”