The Yemen peace talks have been hindered by the parties' unwillingness to compromise on several major issues. 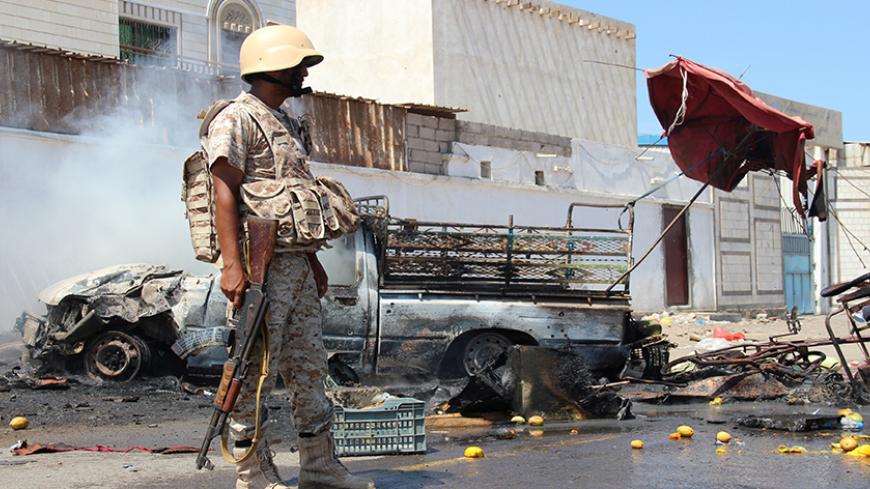 A soldier stands at the site of a car bomb attack in a central square in the port city of Aden, Yemen, May 1, 2016. - REUTERS/Fawaz Salman

BEIRUT — Yemen's civil war escalated when a Houthi revolt sparked in the capital Sanaa in September 2015 and President Abed Rabbo Mansour Hadi fled to Saudi Arabia, where he formed a government and requested Saudi-Arab support to regain power as an elected president. On March 26, 2015, within the scope of the Saudi-led coalition, Saudi Arabia launched airstrikes against the Houthis and the Yemeni army.

The United Nations-brokered peace talks in Kuwait between the Houthis and their allies and Hadi's government have remained at a standstill for nearly a month now, due to the intransigence of both sides and their unwillingness to make substantial compromises to reach a political settlement to end the brutal war and humanitarian disaster created by this conflict that started in March 2015.

Reporter and political analyst Ahmed Abdul Rahman, covering the Kuwait peace talks that started on April 21, told Al-Monitor that the parties are disagreeing on the ruling power.

“The delegation of Sanaa that includes Ansar Allah — also known as the Houthis — and the supporters of former President Ali Abdullah Saleh are proposing the formation of a new consensual transitional regime made up of a national unity government and a presidential council, while Hadi's delegation insists on the return of the current government and president as the legitimate authority,” he said.

Abdul Rahman said that the discussions have been stuck on this issue since the start of negotiations, even after the negotiators were divided into three joint committees: a political committee, a military committee and a committee for detainees and prisoners. “The negotiators insisted on solving and reaching a consensus in regard to this key issue, delaying the work of the other committees. For nearly four weeks, negotiators failed to agree on the road map governing the talks and thus they brought back negotiations to square one,” he said.

Abdul Rahman said that on May 17, negotiators leaked the news that the talks have focused on the formation of an entirely new regime or the expansion of the participation by other parties in in Hadi’s government and the return of Hadi as president devoid of his powers. He pointed out that there is great pressure on Sanaa’s delegation to accept this proposal submitted by Ismail Ould Cheikh Ahmed, the UN special envoy for Yemen, making them accuse the latter of taking sides with Hadi’s delegation.

Mohammed al-Bukhaiti, a member of Ansar Allah's political bureau, told Al-Monitor in Beirut that after about a month of talks in Kuwait, no significant progress has been registered on any of the issues. Bukhaiti explained that the talks are stalled due to the unwillingness of the other party — Hadi's delegation — to reach a political solution, because this solution will result in its loss of power after the formation of a joint government between the two parties.

Bukhaiti recalled that Hadi was a consensus candidate chosen as president in 2012 to succeed Saleh after Yemen’s revolution. “He was Saleh’s vice president and a member of parliament for the General People's Congress [GPC] and had no popular representative base,” he said. Hadi had been appointed vice president by Saleh.

Bukhaiti blamed Hadi’s delegation and its sponsor Saudi Arabia for the talks’ failure to reach a political solution due to Hadi’s impossible demands. He said he considered that Hadi’s demands mean a complete surrender to Ansar Allah and their supporters, in such a way that the group will achieve through the peace talks what they had failed to achieve in the war that is now in its second year.

On May 17, Hadi’s government delegation suspended its participation in the Kuwait talks, stating that it will only return to the negotiation table if the Houthis pledge to withdraw from the towns they have held since 2014 and hand over their weapons.

That same day, Yemeni Foreign Minister Abdul-Malik al-Mekhlafi said in a news conference in Kuwait that the government delegation had decided to suspend its participation in the talks and give the UN envoy a new opportunity to continue his efforts to make the Houthis accept the final agreements, in particular UN Security Council Resolution 2216, the Gulf Initiative and its implementation mechanism and the outputs of the National Dialogue, and to fully recognize the legitimate power.

UN Resolution 2216 demands the Houthis to withdraw their forces from all areas, including Sanaa, hand over the state institutions to the legitimate government and release their political prisoners. The resolution stressed the necessity to resume the political transition in Yemen, according to the Gulf initiative.

Bukhaiti said in this regard, “Ansar Allah agreed to consider Resolution 2216 as a reference for the talks as a result of mediation by the European Union to facilitate the peace talks.”

He added, “It is impossible to implement this decision in its current form. The Houthis and their allies are demanding the formation of a government of national partnership involving all parties, and including Ansar Allah and the GPC in such a way that this transitional government would take over cities, government institutions and heavy weapons and manage the transition period until the new elections.

“How can we hand over weapons to a government that is a party to the war while the two terrorist organizations [al-Qaeda in the Arabian Peninsula] and the Islamic State still have arms? Arms must be handed over by everyone, including AQAP and IS." He indicated that all parties should fight these terrorist groups together before handing arms to the government.

Mekhlafi explained that the government asked the UN envoy to provide a written document from the Houthis confirming their commitment to the agreements and to Resolution 2216, stating that the legitimacy of Hadi shall not be disputed.

Thus, it seems that the government delegation insists that it is the legitimate party, and that the other party must hand over its arms and withdraw from the cities before any talks about resuming the political process.

According to media leaks, on May 18, the UN special envoy backed by the ambassadors of permanent UN Security Council countries proposed the formation of a partnership government — three months after the future return of the current government to Sanaa — provided the return is accompanied by the formation of a joint military committee under UN supervision tasked with disarmament and taking over the cities controlled by the Houthis and the pro-Hadi armed groups. This proposal was strongly rejected by Hadi’s delegation, which rushed to suspend its participation in the talks.

The day after the suspension of the talks on May 17, Kuwaiti Prince Sheikh Sabah Al-Ahmad Al-Sabah held separate talks with the UN envoy as well as with the two delegations to discuss the developments of the talks in an effort to resolve the stalemate. Sabah called on the various parties to resume talks in the interest of achieving peace in Yemen.

Yahya Saleh, once a general in the Yemeni army and Saleh's nephew, told Al-Monitor, “This is a Yemeni-Saudi problem and Saudi Arabia seeks through the Kuwait talks to exonerate itself from its aggression against Yemen and to portray said aggression as a civil Yemeni war, alleging that its intervention was at the request of the legitimate President Hadi — so that Riyadh would evade the payment of any compensation for its aggression against Yemen in the future.”

He added, “The GPC — part of the Sanaa delegation in the Kuwait talks — rejects the return of the Hadi government to power in Sanaa.” According to Saleh, Hadi’s government is different from former Prime Minister Khaled Bahah’s government, which had won the approval of the Yemeni parliament, calling for the formation of another government with new figures.

Many observers find the demands of Hadi’s government unrealistic and perhaps aimed to provoke Sanaa’s delegation and push it to withdraw from the talks, all in a bid to exploit the UN Security Council resolution to pressure the Houthis. The international community seems to be trying to deal with the parties at the same level without taking sides.

Journalist Faisal Jalloul, a scholar of Yemeni affairs, told Al-Monitor, "The Kuwait talks would not have been held if Saudi Arabia were not able to subdue the Yemenis using military force or to prolong the war. Hence these talks became possible when the Houthis started negotiating with Saudi Arabia and agreed on issues related to the borders and other issues. The Kuwait talks aim at formulating an agreement that fits the basic principles agreed upon.”

Jalloul attributed the failure of the talks to the fact that "Hadi and the Muslim Brotherhood can no longer reintegrate into the Yemeni political arena, based on an agreement granting a victory for Ansar Allah and the GPC." He pointed out that Saudi Arabia is attempting to get the maximum possible compromises from the Sanaa delegation and expected a "positive outcome to the talks even if they stall, since the party that started the war wants to come out of it unmarred.”

Unless reciprocal compromises are made by both sides and by Saudi Arabia, the talks will lead nowhere and the devastating war in Yemen that has generated a humanitarian disaster and caused nearly 7.5 million people to face food shortages, will continue.