To be seen as a legitimate peace broker, the United States must urge all sides in the Yemeni civil war to make necessary compromises. 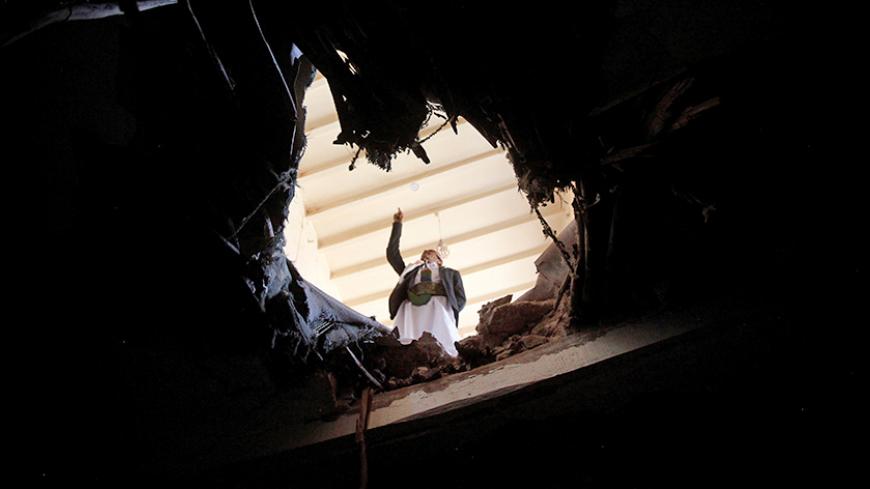 A man looks from the roof of a house destroyed by a Saudi-led airstrike in old Sanaa city, Yemen, Sept. 24, 2016. - REUTERS/Mohamed al-Sayaghi

Amid a rising death toll exceeding 10,000 and an outbreak of famine, the Yemeni civil war continues to rage. Almost four weeks after 3½ months of peace talks in Kuwait broke down last month, Saudi Arabia’s Foreign Minister Adel al-Jubeir declared, “What is certain, not questionable, certain, they [the Houthis] will not be allowed to take over Yemen. Period.” Jubeir is quite realistic in asserting that the Houthis will fail to usurp control of the entire country, assuming that this is even their goal. However, it is unclear whether Riyadh’s ongoing military campaign in Yemen can prevent the formation of a de facto Zaydi Houthi proto-state in northern Yemen.

Ansar Allah (the dominant Houthi militia) maintains its strong grip on Sanaa and other parts of Yemen despite 18 months of Riyadh’s bombardments and blockades. By acquiring foreign flows of cash, forming alliances with other heavily armed actors in Yemen, devising collection services for war efforts, developing a black market for basic commodities and cooperating with a cartel of oil importers allied with Ansar Allah, Yemen’s Houthi rebels have consolidated gains on the ground since seizing the capital two years ago.

In retaliation for more aggressive Saudi bombing since last month’s peace talks fell apart, the Houthis and their allies have more forcefully taken their fight to their enemy’s ‘soft underbelly’ by stepping up cross-border attacks and firing more missiles and rockets at southern Saudi Arabia, which Yemeni media reported led to a damaged Aramco facility.

Ultimately, the issue of Ansar Allah’s arsenal of heavy weapons, which threaten the security of several Saudi cities, and the question of Houthi disarmament contributed to the breakdown of the latest round of peace talks.

Although the Houthis expressed their willingness in principle to disarm and respect a peace agreement, the opposing sides disagree on whether they must first resolve political or security issues. The Houthis and their allies in the Ali Abdullah Saleh loyalist camp have declared a governing council to oversee the disarming of Yemen’s various factions and the formation of a cohesive security apparatus. Representatives of Yemen’s internationally recognized government and its Saudi backers, however, reject this body’s legitimacy and cite UN Resolution 2216 as the basis for conflict resolution. The two sides have reached an impasse because this UN resolution stipulates that Ansar Allah disarm and allow President Abed Rabbo Mansour Hadi’s exiled government to return to Sanaa to oversee a political dialogue between the sides only 45 days after the Houthis withdraw from the capital and relinquish their weapons to a military committee formed by Hadi’s government. Neither the Houthis nor the Saudis and their allies in Yemen have indicated any willingness to compromise.

Having launched their armed rebellion in 2004, the Houthis perceive Riyadh’s proposed plan as too risky for their hard-fought gains on the ground. Unquestionably, if the Houthis were to disarm, Ansar Allah would be in a weaker position should any transition process collapse with renewed Saudi-led military strikes against Houthi targets. Put simply, the Houthis’ ballistic missiles represent valuable bargaining chips that pressure Riyadh to recognize and make concessions to the rebel movement’s demands. Until/unless the Hadi government and Riyadh make such concessions, the Houthis will rely on their heavy weapons to reinforce their message that Ansar Allah remains a national security threat to Saudi Arabia.

As cross-border attacks continue and rockets and missiles keep being fired into the kingdom, Saudi Arabia accuses Iran of culpability. Amid doubts that the Houthis and their allies in Yemen have the technology to indigenously develop and maintain such ballistic missiles, some experts have argued that the Iranian and Syrian regimes and Hezbollah likely provided these weapons. Last month’s reports of Iran's deploying a “liberation army” to Yemen and a Houthi delegation's meeting with Iraq’s foreign minister in Baghdad have not eased Riyadh’s concerns about Yemen’s position in the Saudi-Iranian geosectarian competition.

Playing the “Iran card” is useful for securing Riyadh’s arms deals with the United States. Perceiving the Houthis as an Iranian proxy, 71 US Senators voted earlier this month to shelve a resolution to block a $1.15 billion arms sale to Riyadh amid growing concerns among some American lawmakers about the Saudi role in Yemen.

In Jeddah last month, US Secretary of State John Kerry pushed for a diplomatic resolution to the crisis, calling for a dual-track approach to disarm the factions while simultaneously implementing a national unity government. Kerry’s plan, which included concessions to the Houthis, angered some Saudis, and the secretary left the kingdom having only put forward a “road map” for peace but failing to pressure Riyadh into ceasing aerial bombardments. Within 24 hours after Kerry's departure, the Saudis stepped up their air campaign and Yemeni forces loyal to Hadi waged a new offensive against the Houthi rebels.

Washington’s backing for the Saudi campaign in Yemen (intelligence sharing, logistical support, etc.) came when the Obama administration sought to assuage wary Arab Gulf leaders’ concerns about possible US abandonment of its Gulf Cooperation Council allies for a rapprochement with Iran. Nonetheless, Riyadh’s military campaign in Yemen has unsettled US officials. From Washington’s vantage point, Saudi bombardments and blockades have clearly failed to achieve Riyadh’s objectives while only offering extremists opportunities to usurp power within the fog of a civil war. At the heart of Washington and Riyadh’s differences on Yemen are their two contrasting threat perceptions. For Saudi Arabia, Iranian influence via the Houthis poses the gravest menace to the kingdom’s security. For the United States, however, the Islamic State and al-Qaeda represent the most serious threat out of Yemen.

According to Matthew Tueller, Washington’s ambassador to Yemen, "There is no military solution in Yemen, but a political one." Yet as the Saudis view Ansar Allah as Tehran’s proxy, Kerry’s proposed concessions to the Houthis are dangerous and misguided in the eyes of Riyadh officials, particularly as the rebels step up attacks against the kingdom. Despite Kerry’s efforts to pressure Saudi Arabia to approach Yemen more diplomatically, Washington has unquestionably enabled Riyadh’s military campaign against the Houthis, highlighted by the fact that the US has sold $115 billion in arms to the kingdom under Obama’s watch (more than any other US administration).

On Sept. 25, a rare glimmer of hope came out of Yemen. A high-ranking Houthi figure offered Riyadh a cessation in attacks against the kingdom and an amnesty for anti-Houthi fighters in exchange for Saudi Arabia to stop its bombing and to lift its crippling blockade on Yemen. Although this falls short of the Hadi government’s demands for peace as it excluded anything regarding the Houthis’ arsenal, officials in Washington should react to the offer by pressuring their counterparts in Riyadh to seize on the opportunity to reach a deal with the Houthis that respects all sides’ dignity.

America’s next president must recognize how a diplomatic resolution to Yemen’s crisis serves long-term US interests. Effectively countering the Islamic State and al-Qaeda in Yemen requires a unified state to work with as a partner. To achieve this end, Washington must urge all sides in the Yemeni civil war, including the Saudis, to budge from their rigid positions and make necessary compromises.

However, without blocking arms sales to Saudi Arabia, it is unclear what Washington can do to pressure Riyadh into ceasing its bombing. It is also questionable whether the Houthis and Saleh loyalists will view the US as a legitimate peace broker given Washington’s tacit, albeit crucial, support for Riyadh’s campaign in Yemen. Finally, as the US military is engaged in operations against the Islamic State in Libya, Iraq and Syria, it remains to be seen how much attention Obama’s successor will pay to Yemen.