Houthis and former Yemeni President Ali Abdullah Saleh claim they have formed a government, but they can't necessarily convince the world, or even each other, in the long run to accept it. 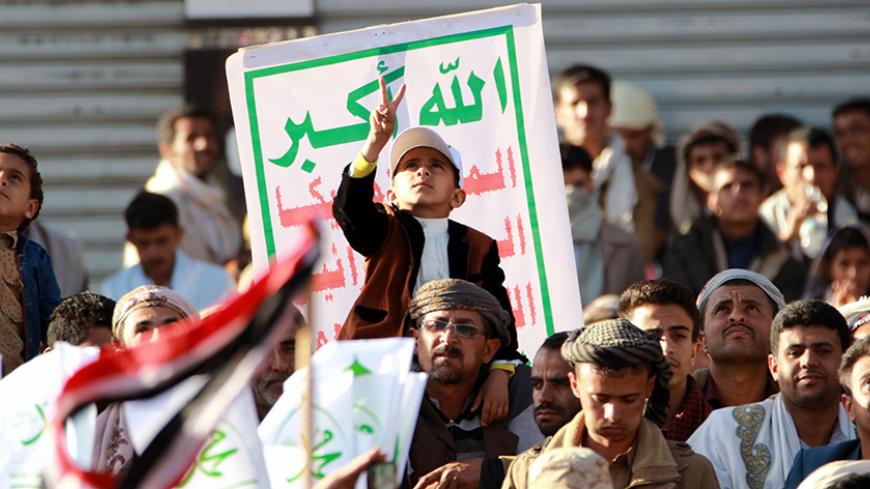 Tensions between Houthi rebels and their ally, former Yemeni President Ali Abdullah Saleh, have escalated since their formation of a self-proclaimed joint government Nov. 28. The process wasn't easy to begin with, and challenges continue to threaten the tenuous arrangement.

The biggest problem facing the newly formed, large government is its lack of legitimacy because no country has recognized it. Saleh was ousted in November 2011 during the Arab Spring, and Abed Rabbo Mansour Hadi, his vice president, took over. However, Hadi was forced to resign in January 2015, and Houthi forces loyal to Saleh declared control the following month. Hadi, backed by Saudi Arabia, soon renounced his resignation and became head of the internationally recognized government, as fighting continued.

Now, under on-again, off-again negotiations through the United Nations, it is hoped Hadi eventually will transfer his power to a new government. But UN-sponsored negotiations in Kuwait failed in April, and the formation of a joint political council Aug. 6 was followed by nearly four months of faltering talks.

The Middle East Eye cited "informed sources" as saying one agreement Hadi rejected in October called for him to transfer his power to a newly named vice president after the Houthis leave Sanaa and surrender their large weapons to a third party. The vice president would then appoint a prime minister to form a government designed to represent all Yemenis.

But, despite heavy international pressure for both sides to resolve their differences, the Houthis and Saleh have declared their National Salvation Government, with a parliament known as the Supreme Political Council. Disputes were expected, due to the nature of the parties' alliance: united by war and divided over politics. They are not natural allies; the Houthis fought numerous civil wars against Saleh when he was in power.

Now, the Houthi-Saleh alliance has appointed Abdul Aziz bin Habtoor prime minister of their government, which comprises 42 ministries. The large number of ministries can be explained by each party's desire to satisfy the biggest number of supporters. In Yemen, as in many countries, state positions are an important means of buying loyalty.

The distribution of ministries between Saleh's party and the Houthi party was significant, as it reflected each party’s priorities. Houthis wanted the ministries related to education, while the General People’s Congress (GPC, chaired by Saleh) sought the more profitable ministries such as telecommunications, oil and other technical ministries. Houthis also took the Interior Ministry, while the GPC took the Foreign Ministry and Defense Ministry.

Internally, the new government’s formation is considered a late attempt to legitimize the alliance between Houthis and Saleh in the areas under their control, as Yemenis had gotten used to calling these two parties the "de facto authority.”

Efforts toward legitimacy will face obstacles such as the collapsing economic situation, an empty bank treasury and a lack of resources such as oil exports. Other factors will not help either, such as the formation of groups that exploited the war, governmental institutions’ inability to collect money from people and the presence of corrupt figures within the popular committees Houthis formed after subduing the capital, Sanaa, in September 2014, under the rationale of overseeing the corrupt state institutions. These committees soon turned into Houthi tools to extort citizens and impose royalties and taxes on businessmen. Also, the committees became a means to steal public money.

With time, it became harder to disband the committees and the network of beneficiaries, for fear that would lead to a clash between the Houthis and Saleh's GPC. Therefore, the National Salvation Government was formed for the purpose of distributing the spoils of war between the two parties, amid heated competition over the state’s positions and funds.

The National Salvation Government formation is a milestone in relations between Saleh and the Houthis, which started as merely a common goal and enemy. Their goal was to undermine the transitional political process Hadi had begun in 2012, but each had a different reason: Houthis could use the power of arms to get more from politics and elections, which would normally only give them a few seats in parliament, while Saleh sought to assert that the 2011 revolution against him failed. Saleh emphasized this point when faced with the news that his plan to nominate his son Ahmad in presidential elections was foiled. In 2014, an agreement reached by the UN and the Gulf Cooperation Council regarding the Yemeni crisis said no soldier is allowed to run for president until he has been out of the military for 10 years. Saleh's son had joined the military in 2001 and served until Hadi dismissed him in 2012, and then became Yemen's ambassador to the United Arab Emirates from 2013 to 2015.

Saleh and the Houthis also have a common partisan nature. They hail from the same region, predominated by Zaydis, who have monopolized Yemen rule for hundreds of years. Saleh represents the tribal side of the Zaydi areas in Yemen, and Houthis reflect the religious aspect of the same region. Consequently, they developed common enemies. Also, Hadi constitutes a threat for both of them because he reflects the political rise of different Yemeni regions like the south, thus breaking the Zaydis’ monopolization of the rule.

Tensions between Saleh and the Houthis broke out when the latter attempted to expand their influence into Saleh’s regions through tribes supporting him or through army camps. The disputes were mainly lightly armed skirmishes due to their conflict over Sabaha Camp in south Sanaa in February 2015. The conflict escalated when Houthis single-handedly announced a constitutional declaration during the same month, without consulting their only ally. The declaration consisted of disbanding the parliament, which is mostly controlled by the pro-Saleh GPC, and set forth a two-year transitional period. This situation crushed Saleh’s hopes of early parliamentary elections. Saleh had been on top of the election game from 1987 until 2012 and controlled the Supreme Commission for Elections and Referendum, as well as the local councils that have a decisive say in the elections. The councils favor Saleh and are feared by Houthis.

Tensions persisted between the Houthis and Saleh until Operation Decisive Storm began in March 2015. It was then that a second alliance phase began, and it was governed by necessity and common feelings of danger. The two parties appeared united. But it was not long before tensions resurfaced when Houthis began negotiating with Saudi Arabia and ignored Saleh. He thus called on his supporters to amass on the first anniversary of Saudi Arabia's strikes.

The Houthis were furious because this move exposed Saleh’s public strength, which they do not have. However, tensions were restricted to the media and only became clearer and worse during the Kuwait negotiations. The delegation representing both parties in the negotiations split into two separate groups due to the Houthis' domination of the negotiations. Notably, the international community takes Houthis more seriously than Saleh because they are a rising military power, they represent Iran in the regional context of the Saudi-Iranian conflict and they control the border with Saudi Arabia.

After the failure of the Kuwait negotiations, the two parties formed a political council in August. As per this council, Houthis gave up the constitutional declaration, which was the point of dispute with the GPC, and brought back the parliament. Then, Habtoor was chosen as prime minister in October and the National Salvation Government was formed at the end of November.

So far, these steps aim to reassure the supporters at home and herald a long foreign confrontation ahead. But the government formation cannot last long due to its missing international legitimacy and lack of economic resources. Besides, there are new challenges to this alliance and its persistence, amid heated competition over positions, money and the mobilization of supporters within the same region, which all parties want to monopolize.