Since the start of the decade, Yemeni society has gone through partisan splits that have devolved into sectarian divisions. 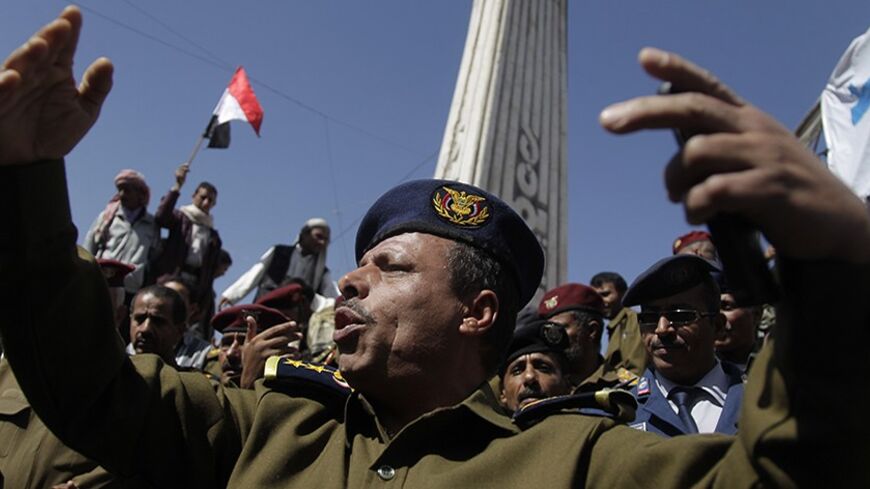 A police officer gestures as he joins other police and army officers during an anti-government demonstration at a Change Square protest camp in Sanaa, March 3, 2014. - REUTERS/Khaled Abdullah

Since the start of the decade, Yemen — the country, its entities and individuals — has seen one split after another. There have been horizontal and vertical splits within Yemen’s entities, institutions, parties and communities.

Those divisions didn’t start at any one particular point, as the driving differences sometimes lay dormant for years. But signs of one of the most significant splits first appeared inside the alliance of the traditional forces. These forces, mostly military political decision-makers, were in power for three decades. The tension between former President Ali Abdullah Saleh and his family started after he made several appointments that favored his son, Ahmed, at the expense of other relatives. Ahmed Saleh was named commander of Yemen’s Republican Guard in the early 2000s. The appointments escalated existing tensions and the alliance began to crumble, affecting the Yemeni army, state and society. The split became official when Maj. Gen. Ali Mohsen al-Ahmar, the commander of the First Armored Division, turned against Ali Abdullah Saleh and became his biggest military threat.

Ahmar declared his support for the revolution that was launched against Saleh after the al-Karama massacre on March 18, 2011. That split was a major sign that the Saleh regime was teetering from the inside. After decades of covering up the the division inside the Yemeni army, the truth eventually came out. The leaders that Ahmar helped bring to power suddenly became revolutionaries who attacked Saleh and his regime. Those closest to Saleh described the dissidents and Ahmar as outsiders whose corruption was suddenly unveiled. The announcement by some officials and deputies from Saleh’s party that they were siding with the revolutionaries was merely the civil facade for intra-military conflicts.

The leadership of the General People’s Congress (GPC) — Saleh’s party, and the most influential political party in Yemen until 2011 — denied allegations that political forces and officials were using the party as a cover to achieve their common interests as quickly as possible. The GPC's leaders were intellectually loyal to other Yemeni parties and organizations, from right to left. After March 2011, that fact became clear. The dissidents and the loyalists used the same discourse used by army commanders. The two most important parties to emerge from the events of 2011 were established by those who left the GPC, such as the National Solidarity Party and the Justice and Building Bloc. Those who remained in the GPC had to choose between either remaining loyal to Saleh or to Abed Rabbo Mansour Hadi (the party’s secretary-general and the new president of the republic), after their positions diverged and their disagreements outweighed their convergences, especially after Hadi decided to oust army commanders loyal to Saleh.

The third most important party that emerged in 2011 was the Salafist Rashad party. The Rashad party didn’t split from the ruling forces, but instead separated from its religious group, which forbade democracy and considered it a Western invention designed to create divisions among Muslims.

Most of those responsible for the military and partisan splits were from the Hashid tribe, from which Saleh and his allies hail. However, many people belonging to this tribe were also against these separations. Therefore, the tribe itself ended up splitting between people who supported the revolution and others who opposed it. Some of the tribe’s elders sided with Saleh, while others sided with Ahmar, as also happened with members of the al-Ahmar, Abu Shawareb and Jalidan families of the Hashid tribe. The same applies to a lesser degree to the Bakil tribe, which is bigger but less influential than the Hashid and whose leadership is contested.

Those protesting Saleh’s regime also split after the announcement of the Gulf Initiative. The Islamist Islah Party supported the initiative, while Houthis and their allies opposed it and considered it a betrayal of the revolution. Afterward, new revolutionary entities were born, such as the Front to Save the Revolution.

While residents of the capital, Sanaa — which was also divided — joined the political process, multiple movements in the south of Yemen were stricken with different types of splits. Some movements considered the youth revolution a response to the demands of the Southern Movement, even though the revolution was launched in the north. Other movements regarded it as a private affair to be settled among the squabbling forces in Sanaa and refused to engage in the political process under the umbrella of the Gulf Initiative.

Following previous divisions, some real and some caused by outsiders, the Southern Movement split in two, cleaving to their positions on the Gulf Initiative and the National Dialogue Conference (NDC). Even then, the pro-dialogue movement witnessed splits, when two representatives of the Southern Movement in the NDC, Ahmad bin Farid al-Sarima and Mohammed Ali Ahmed Bin Ali, separated from the movement.

The most important bloc, smart enough to have maintained unity in its position despite its internal differences, was the Joint Meeting Parties alliance, the formal face that politically spoke for the youth revolution later. But after Saleh’s departure, and when the time came for sharing senior positions of the new government, each component of the bloc started feeling the heavy burden of the other’s positions, as evidenced by the polemics of the Islah Party (Islamist), the Yemeni Socialist Party (leftist) and the Nasserist party (nationalist). The division first appeared when Ahmar — who is close to the Islah Party — joined the revolution’s ranks. The dispute between those who openly participated in the revolution recently came into the open, to cast a shadow on the position of these parties. They disagreed over the NDC document concerning the southern issue. Islah signed the document, but the other two parties adopted positions similar to that of the GPC. Then, everyone backed down and signed the document, albeit with conditions that seemed to gradually fade. But the rift remains.

It is now three years into the new decade. Schisms in Yemen have not just been reserved for political, state and military entities; society also has had its share of splits. This turmoil has exposed the identity of Yemeni society to new divisions, despite its factions' old roots.

The most serious division in society is perhaps the sectarian split that emerged suddenly. When all other alliances were disintegrating, sectarian communities remained cohesive until recent years. The people then took refuge in their tribes and denominations. The sectarian division became the most dangerous of all, because it did not just end an alliance, but paved the way to a never-ending conflict. Yemen had known religious coexistence for decades. With the intensification of battles between Salafists and Houthis, the forcing out of the Salafists and Houthis reviving religious holidays such as Eid al-Ghadir (celebrated by Shiites) and Mawlid (the Prophet Muhammad’s birthday), vertical and horizontal splits have emerged. This division has been expressing itself through the barrel of the gun over the past months.

Based on the above indicators, the divisions among the leaders led to the disintegration of the base that served their interests. Society found itself at the mercy of religious edicts, the ambitions of politicians, money from regional countries and arms dealers. Those parties are the real beneficiaries of the situation, and they are creating an environment that is ready to explode whenever one of the parties wishes. They need only announce it in the mosques, which no longer are gathering points for Yemeni Muslims.