In the wake of the 2011 revolution, the Yemeni political scene has witnessed the emergence of many new parties, yet it remains to be seen how viable and effective these new forces will be. 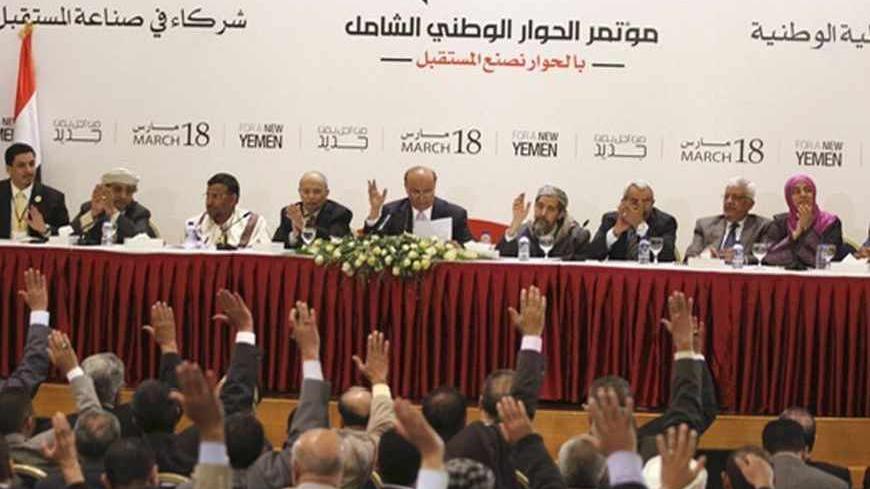 Yemen's President Abed Rabbo Mansour Hadi (C) takes part in a vote with members of the National Dialogue Committee before the start of the first session of the Conference of National Dialogue in Sanaa, March 19, 2013. - Mohamed al-Sayaghi

Abdulwahab al-Homaiqani is a new face in Yemeni politics. He is the secretary-general of the (religious) Salafist Rashad Union Party, the party’s representative to the National Dialogue Conference (NDC), and one of the most prominent new faces in Yemeni politics and public affairs. His party’s proposals often stir controversy, and they are seen as progressive and practical for a Salafist party, especially if compared to old political parties. Homaiqani’s business card includes his contact information and party address, and — surprisingly — the party’s bank account number, which is a simple and smart mechanism to acquire financial resources for the party.

To establish a new party in Yemen, all you need is 2,500 signatures of real names, an internal system and a license application to submit to the Committee for Affairs of Political Parties and Organizations (CAPPO), as the party of Homaiqani and others did.

Over the past 23 years, since the Republic of Yemen was formed after the declaration of the unification of the two countries — South and North — in 1990, 38 political parties have been registered in Yemen. According to CAPPO Secretary Bagash al-Aghbari, 16 of these parties were registered in 2011, which means that the figure doubled at a 1600% rate. Thus, 16 new parties were granted licenses during one year, compared to the previous rate of one party per year.

Among these 16 new parties, Amal al-Thawr became the first Yemeni woman to head a political party — the Arab Spring Party — as well as two other parties which obtained the right of national representation through seven members for each out of the total 565 members of the NDC: the Rashad Union Party and the Justice and Construction Party, whose members defected from the former ruling General People's Congress (GPC).

According to the new regulations, the approval of security authorities for granting party licenses has been canceled. This contributed to the proliferation of new parties or new party projects. These parties lack institutional structures — minimal requirements and tools for a party — as well as the necessary popular base and media organizations to represent them. They are also — collectively or individually — unable to exert pressure in the defense of public issues, since 14 parties could not defend their right to representation in the NDC. However, the Rashad Union Party and the Justice and Construction Party did have these qualifiers: the first has a wide popular base and experience in community service and public mobilization through religious advocacy, and controls a number of mosques, charities and Quran teaching schools, while the second has a leadership with a relatively rich political history since it was part of the former ruling party.

Another new party is the National Solidarity Party, which was able to obtain a nominal attendance at the NDC thanks to the influence and wealth of the founder and head of the party, Sheikh Hussein al-Ahmar, Sheikh Abdullah al-Ahmar's son. The party managed to attract over 31 deputies, representing 10% of members of the Yemeni parliament, to become members of the party. Thus, the party became the third largest parliamentary partisan bloc after that of the GPC and the Islah Party, surpassing two of the oldest Yemeni parties, the Yemeni Socialist Party (YSP) and the Nasserite Popular Unionist Party. However, this does not necessarily mean that the party will have the same ranking after the upcoming parliamentary elections.

Political life in Yemen seems to be completely saturated — even replete — with political parties, many of which are merely names that monopolize small parties, even those with a long history such as the Rai Party (Abdul Rahman Al-Jafari) or the Al-Haq Party (Hassan Zaid). Thus, many believe that there is no need for more fragile parties, especially since the old and large parties in Yemen are ideological parties that are an extension of global or nationalist currents — such as the YSP — which ruled South Yemen before the unification through a strong alliance with the Soviet Union, or the Islah Party, which was founded by the Muslim Brotherhood in Yemen in 1990 as an extension of the global Muslim Brotherhood organization after decades of covert action. The same can be said about the two Baathist parties and the four nationalist and conflicting Nasserite parties.

The new parties have not yet acquired popular legitimacy to exercise political action. These parties are unknown even to the concerned political elites, a few of which have an intellectual ideological background such as the Salafist — almost Wahhabist — Rashad Union Party, which will be represented by seven members at the NDC, perhaps due to this background.

Fouad al-Nahari, a co-founder of the Observatory of Yemeni Political Parties, told Al-Monitor that the new parties were formed with the aim of obtaining the largest share of future interests that are being divided among the political forces. The National Solidarity Party, for example, falls within the sphere of influence of members of the Ahmar family — one of the most prominent and influential Yemeni families — as well as the Umma Party, which was established by personalities known for their loyalty and affiliation with the Houthi movement, and are considered to be its political wing.

So far, the CAPPO — which is authorized to grant licenses for the establishment of political parties — is not independent. It is headed by the minister of state for parliament and Shura council affairs, and has the interior and justice ministers as well as four judges and lawyers as members. Moreover, the constituent conference for parties is not required to meet upon the granting of a license. Most of the new parties have not held any conferences yet. It has also been shown that some of these parties are having financial difficulties, as was the case with two parties which were unable to pay the rents of their headquarters, although they are small apartments consisting of four bedrooms and two bathrooms. This gives the impression that it will be difficult for these parties to survive or continue their present roles, which do not exceed the walls of their offices.

Nahari expressed concern that these parties would take advantage of the legal loops that do not oblige them to publicize their accounts to obtain illegal external financing — like many old parties and new groups in Yemen — to survive. Nahari notes that the principle of public accountability for parties has not been activated yet.

The question remains about the viability of the new parties, and whether this depends on the reality of political transformation in Yemen. This suggests that it is a temporary phenomenon that may disappear in a few years from now. However, although analyzing the future of the political groups in Yemen is similar to astrology, the upcoming parliamentary elections in February 2014 will be crucial. They will also reveal new political groups and parties as well as announce the death of other groups and parties.