The Yemeni revolution did not overturn the influence of tribes on Yemen politics. 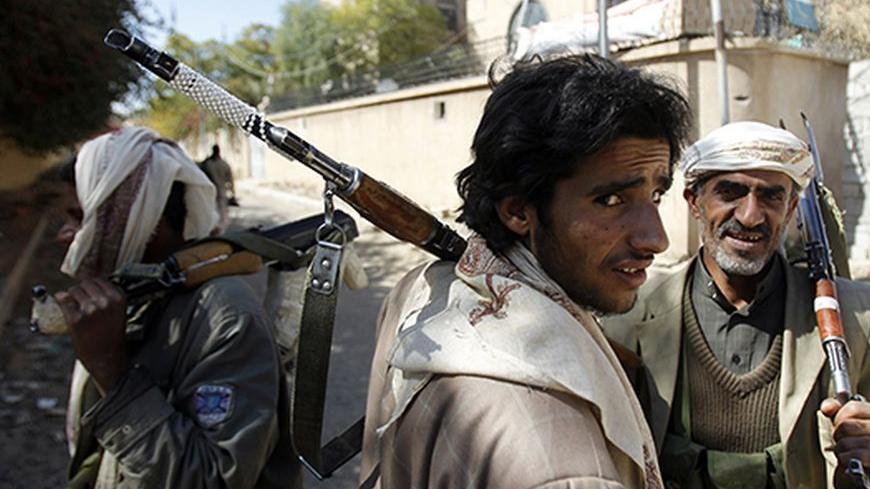 A few weeks ago, the period specified for the Yemeni National Dialogue Conference ended. After information about what happened at the conference was leaked — most notably, talks about adopting a federal system for the new state — President Abed Rabbo Mansour Hadi met with Yemen’s tribal alliance, headed by tribal sheikh Sadek al-Ahmar. Hadi sought reassurances that Yemen’s unity will not be touched following the tribes’ opposition to dividing the country into regions. But Hadi said nothing — didn't even give a speech — to the civil forces that have serious reservations about what happened at the dialogue.

The tribal sheikhs — and not the tribe members themselves — have been directing Yemeni politics more than any other social or political force. Although these sheikhs are involved in and lead many influential political parties, they also engage in political work outside the framework of these parties. They think that they have the right to do what other citizens don’t. They sometimes work outside the context of, and sometimes in opposition to, the political parties that they joined only to use as tools to perpetuate their tribal power, and not as civil political groups whose members are equal.

This attitude is also evidenced by how they deal with others. At the start of the current youth revolution and at the end of 2012, Sheikh Mohammed bin Naji al-Shaef, the head of the Rights and Freedoms committee in the Yemeni parliament, attacked the current unity government’s Prime Minister Mohammad Salem Basendwah for being “Somali,” which means he doesn’t descend from a Yemeni tribal family that would grant him a status appreciated by the tribal sheikhs.

Decades after the Yemeni revolution of September 1962, the tribes’ control over state institutions remains unchanged. The sheikhs have continued control of the legislature as a tradition. As much as 58% of the 1969 parliament’s seats were tribal sheikhs (headed by the powerful leader Abdullah al-Ahmar). That proportion never went below 50%. Ahmar headed parliament from 1993 until his death in 2007. Five of his children are still parliamentary members, representing about 2% of parliament. The parliament speaker to succeed Ahmar was Yehyia al-Rahi, also an influential tribal sheikh and a major-general in the army.

The history of the tribes’ control

After the tribal forces split among the warring parties (Republicans versus monarchists, and some fought as mercenaries) in the revolution, and after the founding of a special government institution that caters to their interests and gaining access to huge amounts of money and weapons, the sheikhs became a lobby that appoints and dismisses government employees at will, starting with the president.

In 1967, they participated in replacing the first president of the republic, Abdullah al-Sallal, with Abdul Rahman al-Iryani, whom they overthrew in 1974 and replaced with Ibrahim al-Hamdi, who was assassinated in October 1977. They supported President Ali Abdullah Saleh in 1978, until they took control the revolution that overthrew him in 2012 after a continuous, three-decade alliance between the tribes and the Saleh regime. The tribes always fought alongside the army, as in the war of summer 1994 against the Socialist Party, the government wars in Saada against the Houthis (2004-2010) and then the army’s war against al-Qaeda in Abyan (2011-2012), although the tribes’ participation took a different form in the latter. For each war, the tribes reaped the benefits of their labor.

Sheikh Abdullah bin Hussein al-Ahmar had enjoyed a special status as the unofficial Yemeni president (some even called him the "maker of presidents"). In in 1993, he was head of parliament, the head of the largest Islamic party, the sheikh of the most powerful Yemeni tribe and the main link with Yemen’s influential neighbor Saudi Arabia. In the mid-1990s, his son Hamid al-Ahmar suddenly became a business giant by taking advantage of his father’s influence to secure special privileges and deals. He became the owner of the first mobile telecommunications company, the biggest shareholder of Saba Islamic Bank and an agent for a number of international companies.

Hamid monopolized Yemeni oil sales as the exclusive agent of the English Arcadia Petroleum company. That lasted till 2009, when the decision was made to form a special committee to sell Yemeni oil by auction to various competitors. Behind that decision was the son of former president Ali Abdullah Saleh, Brig. Gen. Ahmed Ali Saleh, the former commander of the Republican Guard and the arch-foe of Hamid al-Ahmar.

Other companies started to compete for the purchase of Yemeni oil via local agents who were also sons of sheikhs, such as al-Shaef and Abu Lahhoum, or from Saleh’s relatives, such as his nephew Yehia Saleh and the son of Maj. Gen. Ali Mohsen al-Ahmar.

This new auction mechanism cost the sheikh/trader/politician Hamid al-Ahmar tens of millions of dollars that he had come to expect by monopolizing the oil sales and selling oil for less than the world price.

At the same time, a disagreement emerged between Hamid and Saleh about a deal around a communications network in Sudan worth tens of millions of dollars, resulting in Saleh’s intervention to make the deal with Shaher Abdel Haq, another of Saleh’s allies and a rival of Hamid. Saleh tried to placate Hamid by offering him tens of millions in compensation for the latter losing the Sudan deal, but Hamid returned the check.

Those deals were a big slap in the face from Saleh and his son Ahmed to their “ally” Hamid al-Ahmar, who was no longer their ally after he took political positions against what he considered plans by Saleh to pass on the reins of power to his son Ahmad. This is how the struggle started between the sons among the ruins of their fathers’ decades-old alliance.

After his fiery anti-Saleh statement demanding that he step down and accusing him of inciting wars and strife and trying to bequeath power to his son and committing treason, an Al-Jazeera achor asked Sheikh Hamid al-Ahmar, "Don’t you fear returning to Yemen after what you’ve said?" He responded, "Anyone behind whom stands the Hashid tribe and Sheikh Sadeq al-Ahmar is not afraid." Former President Saleh belongs to the Hashid tribe, which is led by al-Ahmar family.

Afterward, Hamid adopted modern tools in his conflict with Saleh and his son. Hamid formed political alliances that included the Preparatory Committee for National Dialogue (a different committee from the one for the current dialogue), which included prominent leaders of Yemen’s opposition, including the head of the current government, who supported many newspapers and journalists that opposed Saleh. He then launched the Suhail satellite TV channel, which was devoted to attacking Saleh and his son.

At the same time, Hamid's brother Sheikh Hussein al-Ahmar formed the National Solidarity Council, which recently became a party. Also, his other brother Sheikh Sadiq headed the Alliance of Yemeni Tribes. All those were entities that opposed Saleh, and they operated under the auspices of the largest tribal family in Yemen.

Despite the efforts of Saleh, his son and the tribal leaders loyal to him in forming counter-entities (media outlets, political parties and organizations), they didn’t have the same effectiveness as those supported by the al-Ahmar family, which employed capabilities and personnel of the oppositionist Joint Meeting Parties, especially the Reform Party.

In 2009, Hamid al-Ahmar met the US ambassador in Sanaa and told him that he planned to overthrow Saleh by supporting the unrest in the north and south and by organizing demonstrations by attracting Mohsen and winning the support of Saudi Arabia, at a time when Saleh was at his weakest, according to leaked WikiLeaks documents.

In January 2011, Yemeni youth took to the squares to demand Saleh’s departure. But the independent youths were not organized and didn’t have sufficient means for a revolution. So the tribe used its influence and its alliances: Hamid al-Ahmar provided money and directed the youths to the squares until his Reform party dominated the revolution organizationally and in the media, especially after Mohsen joined the revolution and made an alliance with Sheikh Ahmar against Saleh. And so history repeated itself in Yemen: A tribe and its allies have controlled every revolution in the country’s modern history.

The honorary shields of the youth revolution

On the first anniversary of Saleh’s departure from power (February 2013), the organization of the revolution’s youths presented five honorary shields in its name to post-Saleh leaders. One shield was given to the president of the republic and one was for the prime minister. The remaining three shields went to Mohsen and to the brothers Sheikh Sadeq al-Ahmar and Sheikh Hamid al-Ahmar. Those five shields comprise 60% of the new revolution’s honorary shields that have been granted.

The tribal areas of Marib, Shabwa, Radaa, Amran and other areas of Yemen are hotbeds of security disturbances, assassinations and sabotage of public interests. Despite that, the sheikhs of these tribes receive monthly stipends from the state budget via the Tribal Affairs department and other channels. The same thing was happening before 2011.

Tribalism remains the sole driver of politics in Yemen, taking advantage of the international support for the Gulf Initiative, which Yemeni parties have used to reposition themselves.