The causes of the Yemeni government’s failure to hold the city of Amran against Houthi militias are deeply rooted in history. 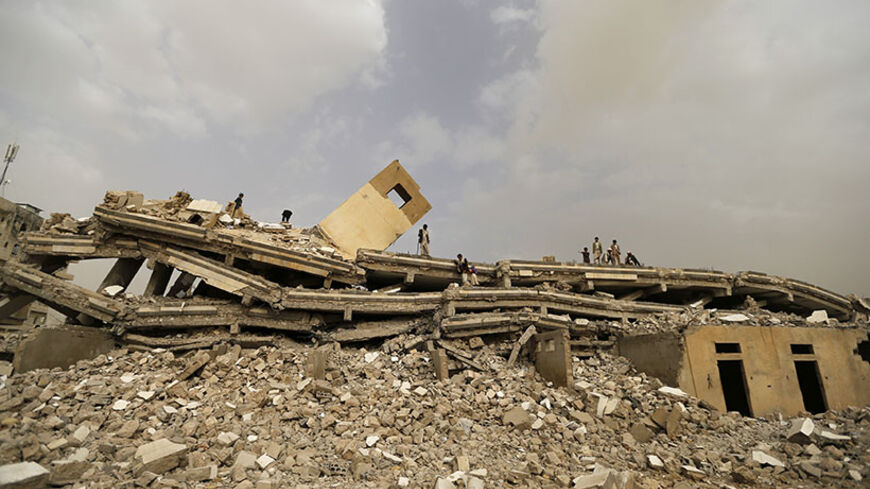 People look through the wreckage of the headquarters of Yemen's Islamist Islah party in Amran, July 14, 2014. - REUTERS/Khaled Abdullah

SANAA, Yemen — Amran is the city of the Hashid tribe, the tribe of Ali Abdullah Saleh, the former president of North Yemen from 1978 and the first premier after the reunification in 1990. From this time on, all military leaders have hailed from this tribe, including Gen. Ali Mohsen, who defected from the regime in 2011 during the popular revolution. The Hashid tribe remains the strongest among the Yemeni clans, headed by prominent politician Sheikh Abdullah Bin Hussein al-Ahmar until his death in 2009. Under the Saudi Wahhabist banner, the tribe managed to rule Yemen for more than three decades until it divided during the revolution in 2011.

The Houthis are a Zaydi-Shiite group that emerged as a result of the consecutive rounds of fighting they waged against by the state from 2004 onward. The Houthis grew and expanded and are now governing the city of Saada, which is inhabited by more than a third of the country’s population and borders Saudi Arabia in the far north. The city is seen as the stronghold of the Zaydis, who present more than a third of the Yemeni population.

In 2011, the Houthis participated in the revolution against Saleh and formed a wide political alliance in Sanaa that was known under the name of Ansar Allah.

The situation following the 2011 revolutions left an army and a capital divided; a participatory government and a decline in the state’s presence in most of the cities. This prompted the Houthis, as an armed sectarian militia, to expand militarily in their sectarian regions in an attempt to get rid of Wahhabis in these regions during the reign of Saleh. They also took advantage of the absence of the state, as the group refused to turn into a political movement or party, despite the Houthis’ participation in the national dialogue. The military aspect continues to be the group’s strongest characteristic as it was not recognized until it became a powerful military group that controlled some areas.

The battle for Amran started four months ago when Houthis moved to support the uprising of the Hashid tribe against Bani al-Hamar Sheikhs, the tribal allies of the Islah Party. This was an indication of the change in the balance of power north of Sanaa, the stronghold of most of the influential tribal forces, which forged alliances with either each other or the Islah Party and Saleh. The tribes that were allied with Saleh shifted their stance and joined with the Houthis against the Islah Party, which was the spearhead of the revolution that toppled Saleh.

The sons of the Sheikh al-Ahmar tribe failed to preserve their status as sheikhs after the death of their father due to their sense of superiority over the rest of the tribe, an attitude that stemmed from their father's close ties to Saudi Arabia and his significance in Yemeni politics since the 1962 revolution.

Meanwhile, the Houthis supported this movement and managed to defeat al-Ahmar's sons. In a symbolic move, they destroyed the latter’s house, a custom practiced by Imam Hadi when he introduced the Zaydi sect to Yemen and established the first Zaydi state 1,000 years ago. The destruction of one’s home after evacuation means that he must never return.

This is how the confrontations started in May 2014 between the Houthis and one of the biggest military brigades, Brigade 310, led by al-Qushaibi, a supporter of Mohsen. The conflict was reminiscent of the military divisions and the failures of the attempted restructuring. It is publicly known that Gen. Kashibi fights without any orders from the minister of defense nor the president himself.

The European Union’s statement, issued July 10, confirmed this when it noted the army’s rebellion as well as the absence of any official statement offering condolences for the death of the Kashibi Brigade. During the war, President Abed Rabbo Mansour Hadi stayed silent and did not give any legitimacy to these fighters. He did not isolate his commander or reveal his rebellion so he would not clash with Mohsen.

This does not mean that the country’s government did not try to take small steps, even late ones. Hadi was late, on June 8, to name a new governor from the Congress Party and eliminate one source of tension caused by the Islah governor. (The tension was caused by the Houthis' rejection of the presence of any Islah member in the government, especially since both parties were in conflict over the control of the north.) However, things had already exploded and the war was on. The army, pro-Mohsen or not, was putting pressure on the president and the minister of defense, as supporting an army brigade is necessary to prevent rebellious groups from trying to take over a city close to the capital. The air force was operational, but according to observers, these strikes were not at all effective and neither stopped nor reduced the Houthis' week-long blockade. The only result was to diminish the anger of the generals until the brigade failed and its commander was killed July 8.

The military victory of the Houthis is attributed to their status as a religious group from Zaydi, fighting with militants from the same regions — unlike Islah, who are getting help from people from outside the region and from one rebel army brigade. On the other hand, Islah's inadequate ruling from Sanaa led to the loss of the people’s support. This is how the Houthis took advantage of Islah’s enemies and mistakes.

The regional situation also favors the Houthis, who are supported by Iran, rather than Islah, who are now unprotected after losing the support of Saudi Arabia. This was the result of the growing fear in Saudi Arabia of the Muslim Brotherhood and the stance the Yemeni Brotherhood took concerning the military coup in Egypt, as well as the fact that Riyadh has started to accept the change of power in Yemen in favor of the Houthis. However, this does not mean that it is completely out of the scene, as Hadi flew to Saudi Arabia when Amran failed, to ask for financial and political support.

Some observers, like Sanna-based political consultant Abdul Ghani al-Iryani, think that the Houthis have earned a great deal of military gains and that their military faction, led by Abu Ali al-Hakem, is now out of the control of the political leadership, which is a dangerous sign. However, due to the international and regional interventions, Iryani does not find the Houthis to be on their way to expanding even more. He also believes that things on the battlefield are going to calm down.

On the other hand, Yemeni journalist Abdul Bary Taher sees the Houthis as an armed militia and thinks that the political side is only a fragile layer that would make sure the military fight continues, but at a slower pace. The Houthis will most probably try to take over all the geographical area of Zaydi, surrounding the capital Sanaa, but without fighting in Sanaa itself. Even though the capital is a historical Zaydi city, over the past decade it has become a city for Yemenis from all different religious sects. Opinions vary concerning what could happen and how much control Hadi and the countries supporting the GCC initiative have on the situation. However, it is certain that the next few months will determine the outcomes of the conflict in Yemen. Will there be signs of peace or escalation?