Yemen falling out of Saudis' grasp

Saudi Arabia is struggling to form an effective Yemen strategy as its three main adversaries — the Shiite Houthis, al-Qaeda and the Muslim Brotherhood — continue to dominate the Yemeni arena. 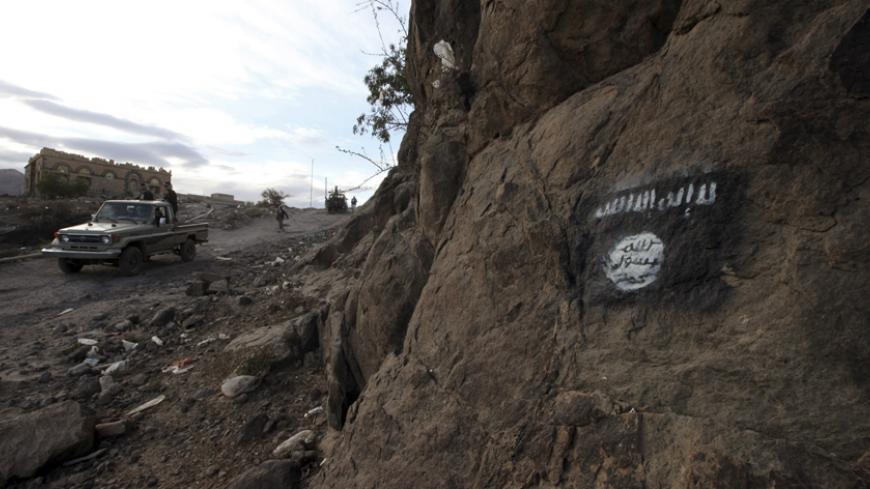 Shiite Houthi rebels drive a patrol truck past an Ansar al-Sharia flag painted on the side of a hill, along a road in Almnash, the main stronghold of Ansar al-Sharia, Nov. 22, 2014. - REUTERS/Mohamed al-Sayaghi

Although Khaled Bahah's government obtained the confidence of Yemen's parliament in December and officially started carrying out its duties, the political and military situation in Yemen is getting worse and more complex, as a result of the growing power of Islamist (Shiite and Sunni) militants. It's the last thing that Saudi Arabia would have hoped for, after its alliance with Yemen’s main tribes broke down.

Besides the traditional dangers that Saudi security has been facing across its border with Yemen for decades, such as weapon and drug smuggling and even infiltration and people smuggling, the sharp rise of the Houthis’ Ansar Allah militia is a new danger threatening southern regions of Saudi Arabia. This is especially true since gains made by the Houthis and their military control over the Hajjah governorate, 123 kilometers (76 miles) northwest of Sanaa, is adjacent to the Saudi border. This prompted the Saudis to declare a state of military alert on its border with Yemen in October 2014.

The security concern — existent in Riyadh since the Houthi influence was extended to Saada, 45 kilometers (28 miles) from the predominantly Shiite Saudi city of Najran — will deepen amid another media and diplomatic embarrassment: Riyadh will have to deal with the Sanaa government, which includes political and military officials belonging to the Houthi militia. This group was placed on the Saudi terrorist list last March.

Riyadh shares a border of about 1,800 kilometers (1,118 miles) with Yemen. Both countries also share common interests that make Saudi Arabia the country with the greatest influence on developments in Yemen and the most affected country by shifts in the nation. However, Riyadh did not undertake any direct or active role to try to prevent the advance of the Houthis, and the political and material support it provided was limited to Yemeni President Abed Rabo Mansour Hadi and his army, which collapsed in the face of the Houthis.

The tribes, Al-Ahmar in particular, are seemingly enduring a dual punishment for their role in toppling the regime of Ali Abdullah Saleh and forging an alliance with the Muslim Brotherhood’s Al-Islah Party. It should be noted that the Brotherhood is despised by Riyadh and Abu Dhabi, and the latter is home to Ahmed, the son of former President Saleh, who still wields great influence in the Yemeni military.

The UN Security Council had agreed to impose sanctions on Saleh in addition to Houthi commanders on charges of obstructing the political process in Yemen, spreading chaos and threatening stability. However, remarkably the UN resolution, which was issued on Nov. 7, 2014, did not include the name of Houthi leader Abdul-Malik al-Houthi, who was mentioned in media leaks about the resolution. Reports published by some Yemeni newspapers stated that the Houthi leader had been sending direct threatening messages to Hadi. This was seemingly a major cause behind his exclusion from the draft resolution. Added to this is the keenness of the United States to avoid provoking Iran at the present time — the main patron of the Houthis — while nuclear negotiations continue.

Houthi, the leader of the Shiite Ansar Allah group, had expressed the “ease” with which he won and controlled the capital Sanaa through quick military operations during his ceremonial speech on Sept. 23, 2014. This, observers say, seemed like muscle flexing rather than an actual battle given the suspicious absence of regular land and air forces, which, under Saleh, would have forcefully and decisively confronted the Houthi militia.

This raises political doubts and accusations at the domestic and foreign levels about the involvement of some of Yemen's political and military leaders who remain loyal to Saleh in facilitating the Houthis’ takeover in the Yemeni capital. According to Hadi, it is a plot, while for the Houthis’ spokesman, Mohammed Abdul Salam, it falls under the category of coordination and communication between the Houthis and Saleh.

The plot, or communication and coordination, which was intended to implicate Al-Islah and its ally Al-Ahmar in a military confrontation with the militia of the Houthis to get rid of the Muslim Brotherhood and its allies, has thus far not achieved its goals. The Muslim Brotherhood, which preferred to ride out the storm, is still coherent and did not get involved in a military confrontation with the Houthis as planned, despite the attacks against it and its allies from Al-Ahmar.

It should be noted that Al-Ahmar has lost part of their property and influence in several areas, notably Amran, the northern gate of Sanaa, at the hands of the Shiite Houthi militia. The latter took control in July 2014 of the headquarters of the Hashed tribe and the Muslim Brotherhood Al-Islah Party and seized several military headquarters with all their arms. Chief among these was the camp of the 310th Armored Brigade, in which Brig. Gen. Hamid al-Qushaibi was killed during the attack. Qushaibi supported the revolution against the regime of Saleh, refused to withdraw and insisted on resisting the Houthi militia.

The Shiite Houthis, who took control of the northern and western regions of Yemen, are currently facing great difficulties in their control over the central areas, where al-Qaeda’s experienced Ansar al-Sharia are carrying out regular suicide attacks, causing large losses in the ranks of the Houthis in battles currently raging in the two governorates of Ibb, 193 kilometers (120 miles) south of the capital, and Marib, 173 kilometers (107 miles) northeast of Sanaa.

This explains the welcome that Ansar al-Sharia received in the Sunni tribal areas. The population of these areas feel abandoned by the Yemeni government, which is unable to protect them and help them restore their land and property from the Houthis. This is what prompted the local tribes to forge an alliance with elements of Ansar al-Sharia after the residents had expelled them from their areas in 2013 — such as in Rada, 150 kilometers (93 miles) southeast of Sanaa, upon the request of the Yemeni government and for fear that US drones would target their land.

Moreover, some traditional Salafists in Yemen opted for the Salafist-jihadist ideology, which presents itself as the protector and defender of Yemeni Sunnis in the face of the Houthi Shiite militia.

Those losses and failures, as well as the Houthis’ failure to terminate the Brotherhood in Yemen, explain the reason behind the violent campaign waged by the Saudi media against Saleh, whom they accused of plotting a conspiracy to mislead the Saudi leadership and spread false information for personal goals. This indicates that just like other countries, Riyadh was surprised that what happened on the ground exceeded all odds and came to pose a threat to its own security. It also indicates that Riyadh is now blaming Saleh for the inaccurate information it has regarding the nature and objectives of the Houthi movements.

The Saudis know full well that their choices in the new Yemen have narrowed down and that there are countries sharing the final decision with them and which might exceed them in influence in the future. They are also well aware that previous military experiences do not encourage another try, especially amid their current participation in the international coalition against the Islamic State in Iraq and Syria. Therefore, Riyadh may be forced to support the idea of using regional or international military forces under the pretext of helping the Yemeni government regain control if the situation continues to deteriorate amid the Houthis’ continued expansion, the Muslim Brotherhood’s ongoing presence and al-Qaeda’s escalated activity.