The decision by Gulf countries involved in the Yemen war to sever ties with Qatar has created complexities on both sides of the Yemen conflict. 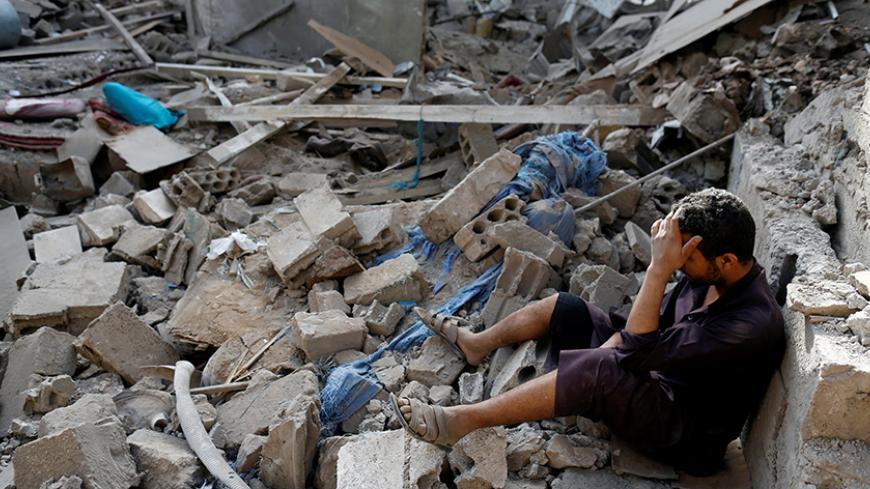 A man sits on the rubble of a house of his relatives, destroyed by a Saudi-led airstrike in Sanaa, Yemen, June 9, 2017. - REUTERS/Khaled Abdullah

No sooner had the Gulf-Qatar crisis begun than the internationally recognized Yemeni government announced June 5 it also was severing ties with Qatar, following in Saudi Arabia’s footsteps. This wasn't surprising, as the Yemeni government enjoys Saudi support.

The Yemeni government, led by President Abed Rabbo Mansour Hadi, welcomed the Saudi expulsion of Qatar from the Saudi-led anti-terrorism alliance against the Houthi rebels. Qatar’s participation was neither remarkable nor effective on the military and political levels, unlike the United Arab Emirates (UAE) and Saudi Arabia, and was restricted to a small Qatari force of 100 soldiers positioned on the Yemeni-Saudi border.

The main forms of Qatari support for the Hadi government consisted of paying the salaries of Yemeni diplomatic staff for two years, in addition to providing what critics consider biased media coverage of the war in favor of the alliance and the government through media outlets like Al Jazeera in Doha and the New Arab in London, which is owned by a Qatar company.

Al-Islah, the main political party in Yemen opposing the Houthis, is close to Hadi and has been a proponent of Qatar. The party, which represents the political arm of the Muslim Brotherhood in Yemen, was oppressed by Houthis, who raided the houses of its leaders and members and arrested some of them for political or sectarian ends. Therefore, most of the party's leaders and members left Yemen with the outbreak of the war. Many, including party head Mohammad al-Yadoumi, reside in Saudi Arabia.

On June 5, Al-Islah's leadership issued a statement supporting the Hadi government’s stance against Qatar. However, some other Al-Islah leaders and members live in Turkey, where Belqees TV broadcasts, and many support Qatar. Consequently, a contradiction was blatant between the official stance of the party and the stance of its Turkey-based members and youths who are sympathetic to Qatar, as is the Turkish government. The Brotherhood’s support for Qatar explains Al-Islah members’ campaign against the UAE and its role in Yemen. However, they have avoided attacking or criticizing Saudi Arabia.

Saudi Arabia and the Brotherhood in Yemen have a deep-seated alliance. The party's founder and deceased leader, Sheikh Abdullah ibn Husayn al-Ahmar, received huge financial support from Saudi Arabia and helped the kingdom exert influence on northern Yemen's tribes. Saudi Arabia also funded religious institutes offering the equivalent of formal education in Yemen. Brotherhood members in Yemen controlled these schools from the time they were established in 1975 until they closed in 2001.

But relations between Al-Islah and Saudi Arabia grew frosty when the party participated in the 2011 revolution against former President Ali Abdullah Saleh, while the UAE and Saudi Arabia grew closer. The UAE is strict in its stance against the Brotherhood in Yemen. Despite this, Saudi Arabia still welcomed Al-Islah leaders, knowing that it was the only Yemeni party that openly supported the Saudi-led Operation Decisive Storm against the Shiite Houthi rebels in Yemen. Moreover, the Saudi-UAE terrorist list did not include any names from the Yemeni Brotherhood. The only Yemeni on the list was Salafist leader Abdul Wahad al-Hamiqani, who currently lives in Qatar.

Qatar took political and diplomatic steps to end the 2004-2010 wars in Yemen's Saadah district between Houthis and Yemeni government forces. Qatari Foreign Minister Hamad bin Khalifa Al Thani visited Sanaa, Yemen's capital, to broker a cease-fire in May 2007. Qatari mediation followed in June 2007 and succeeded in reaching an agreement signed in February 2008 by both parties. The agreement faltered by March, however, and a fifth round of battles erupted, followed by a Qatari media attack against Saleh, who accused Qatar of supporting Houthis.

Since 2009, tensions have worsened between Qatar and Saleh. Saleh accused Qatar of supplying Houthis with weapons and money. The dispute peaked in 2011 when Qatar leaned toward supporting the public Yemeni action to topple Saleh, who considered this a conspiracy. Saleh accused Al Jazeera of serving the conspiracy. It's only normal for Saleh to celebrate the Saudi-UAE decision against Qatar, which stands accused of supporting terrorism. It's noteworthy that Saleh and the Houthis formed an alliance after the 2011 uprising — an alliance that is now falling apart.

The repercussions of the Gulf-Qatar dispute will be felt in Yemen. Reconciliation is still out of the question at the moment. But the Yemeni battle is expected to become more heated in line with the tensions in the region, especially in the Gulf. The key players will be more active, as Yemen is now a battleground for proxy wars to strike UAE and Saudi forces. Qatar will need Iran now that its land borders with Saudi Arabia have been closed. Moreover, Qatar’s foreign policy will be judged based on how cold and how warm its relations will be with the Gulf countries and Iran, respectively. Qatar might even mend its severed relations with the Houthis.

The most perplexing question is how Qatar will deal with the Brotherhood's Al-Islah party in Yemen, which took an official stance against Qatar, even as many party members unofficially support it. The Muslim Brotherhood in Yemen tightly controls Qatari media outlets, and Qatar funds influential Yemeni Brotherhood media organizations. Against all odds, the Brotherhood remains a strong military power that is present across all Yemeni territories, unlike the Houthis, who are limited to northern Yemen — which is still an important location. Northern Yemen abuts Saudi Arabia, and its front lines have been the most damaging and draining for the kingdom before and during the war.