Riyadh Agreement at risk of collapse in southern Yemen 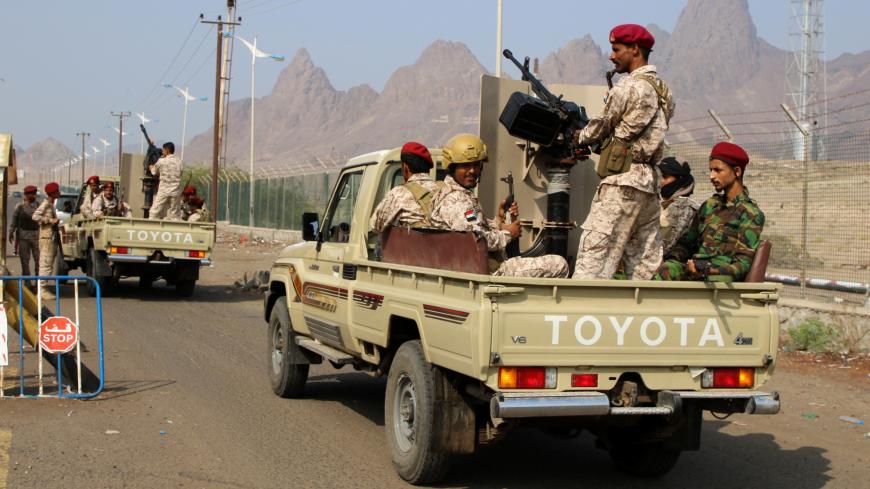 On March 31, a source within Yemen’s Health Ministry accused militants loyal to the United Arab Emirates-aligned Southern Transitional Council of stealing nine ambulances provided by the World Health Organization to fight COVID-19. Southern Transitional Council official spokesman Nizar Haitham denied these allegations to Al-Monitor, emphasizing the council’s cooperation with the UN health agency and the Yemeni Ministry of Health against the threat of the novel coronavirus. Nonetheless, the episode reflected the recent upsurge in hostilities between the Yemeni government and the council.

The escalation of intra-coalitional tensions in southern Yemen was triggered by Saudi Arabia’s alleged involvement in blocking four Southern Transitional Council officials from returning to Aden for political negotiations March 13. This incident caused the council to warn of negative consequences for Yemen’s peace process and revealed Saudi Arabia’s frustrations with the UAE’s last-minute correspondence with Riyadh about the planned return of council officials from Jordan. Clashes erupted between the council and Yemeni government forces March 20, and on April 1, Saudi Arabia expanded its deployments of elite forces in Aden to guard against future hostilities instigated by the council.

Escalating frictions between Yemeni government forces and the council have sparked concerns that November's Riyadh Agreement, which united both factions into a governing coalition, could collapse. Nadwa al-Dawsari, a nonresident expert at the Middle East Institute, told Al-Monitor that the Riyadh Agreement “will likely inevitably fail” as “both sides who signed onto it walked away with very different interpretations of the agreement and that was never addressed.” The Southern Transitional Council’s interpretation of the Riyadh Agreement includes the belief that it should pursue self-determination or outright independence if popular support aligns with these views. Yemeni President Abed Rabbo Mansour Hadi disagrees with this perspective, as he emphasized the inviolability of Yemen’s unity in a December statement and stated his preference for a federal structure in Yemen.

The UAE’s geopolitical ambitions in southern Yemen, which include establishing economic hegemony over Aden and bridging its Red Sea presence in Yemen with its spheres of influence in the Horn of Africa, also impede the implementation of the Riyadh Agreement. The UAE’s footprint is particularly visible in the clashes in Socotra, as Yemeni security forces recently seized arms caches from an Emirati humanitarian ship, and Emirates airline has reportedly continued flights to Socotra despite the COVID-19 pandemic. In the rest of southern Yemen, the UAE completed its withdrawal in February, but Qassem noted that Abu Dhabi has “not severed contact with its allies in the south.” As Saudi Arabia is preoccupied with containing Houthi belligerence on its borders, Riyadh’s ability to rein in the UAE’s ambitions in southern Yemen is constrained. Dawsari, noting this limitation, said, “Saudi Arabia has not used enough of its leverage on both sides to force them to comply with the Riyadh Agreement.”

In spite of these countervailing pressures, the Riyadh Agreement might survive in the short term due to Saudi and UAE unwillingness to risk a major rupture in their alliance, and the Yemeni government and the Southern Transitional Council’s common opposition to the Houthis. Although the UAE’s strengthened relationship with Syrian President Bashar al-Assad, unilateral dialogue with Iran and opposition to Hadi and al-Islah have fomented genuine frictions in its alliance with Saudi Arabia, COVID-19 and the crisis in world oil markets have underscored the need for a cohesive Saudi-UAE alliance. When disagreements over Yemen have flared up, Saudi Crown Prince Mohammed bin Salman’s close personal relationship with Abu Dhabi Crown Prince Mohammed bin Zayed Al Nahyan has prevented a breakdown of the Riyadh Agreement, and a descent into a Saudi-UAE proxy war in Yemen.

The growing belligerence of the Houthis in southern Yemen could also help paper over the cracks between Hadi’s coalition and the Southern Transitional Council. Houthi assertiveness has been particularly impactful in southwestern Yemen’s Dhale province, as the Houthis launched missile strikes on a Security Belt Forces military parade Dec. 29 in Ad-Dali, the provincial capital (the Security Belt Forces are a UAE-backed separatist group). Five Houthis were later killed in a retaliatory Yemeni army bombing in western Dhale on Jan. 15. The Houthis have also stepped up their military campaign in Abyan, where a missile attack killed three Yemeni soldiers at a government army base Feb. 12.

As the Houthis achieve notable military successes in northern Yemen, this trend is likely to continue. Fatima Alasrar, a nonresident expert at the Middle East Institute, told Al-Monitor that “the Houthis will intensify their expansionist ambitions in southern Yemen” in an attempt to hand Iran access to the Bab el-Mandeb Strait. This prospect should lead to anti-Houthi solidarity between the Saudi Arabia and the UAE, which could extend in a limited fashion to the Hadi government and the Southern Transitional Council. Nevertheless, Alasrar said, “Some powerful elements in the Muslim Brotherhood may see it better to ally with the Houthis than divide the country.”

Although the United Nations has urged Yemeni factions to lay down their arms and focus on the struggle against COVID-19, southern Yemen remains a major nexus of instability. The Riyadh Agreement’s fragility has been laid bare by recent events, but its imminent collapse could be staved off by the desire of both Saudi Arabia and the UAE to preserve their alliance, and by the growing momentum of Houthi forces on the battlefield.