The United Arab Emirates is cutting back its forces in Yemen for a variety of reasons, though not exiting entirely, leaving Saudi Arabia to fill in at some strategic sites such as Aden and Perim Island to secure the Bab el-Mandeb Strait’s lucrative shipping lanes. 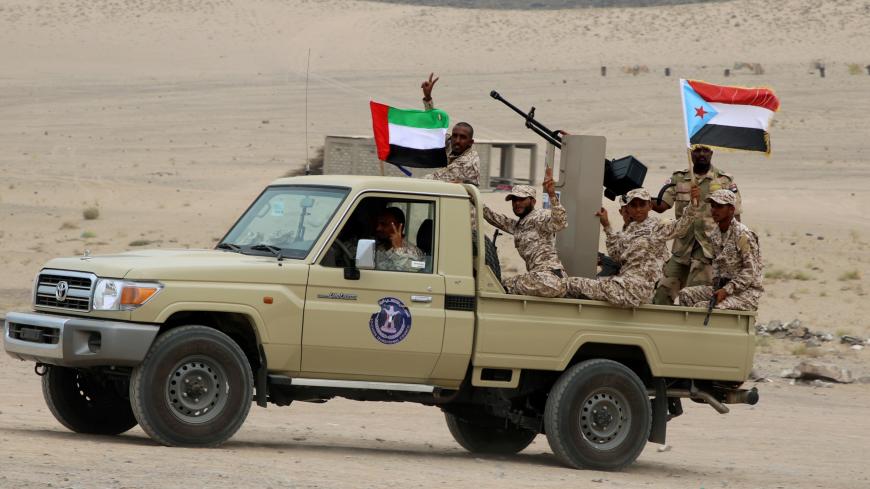 Newly recruited troops of the UAE-backed separatist Southern Transitional Council are seen on a vehicle during their graduation, Aden, Yemen, Jul. 23, 2019. - REUTERS/Fawaz Salman

There are many possible explanations for the United Arab Emirates’ decision to substantially reduce its military presence in southern Yemen, though one stands out: the Emiratis’ rising unpopularity in an increasingly unpopular war.

The recent drawdown is supposedly part of a “strategic redeployment” of Emirati forces to the Persian Gulf as tensions there have grown between Iran and the United States. The UAE insists its troop reductions were possible as a natural consequence of its triumphs over al-Qaeda in the Arabian Peninsula and the rebel Houthis. (The Houthis are widely accepted as being backed by Iran, a bitter rival of Saudi Arabia and the UAE, though the Houthis deny any affiliation.)

But the rising resentment against the UAE’s military presence in southern Yemen also contributed to its partial withdrawal from the region. Initially, Yemeni outrage was largely confined to human rights abuses allegedly perpetrated by UAE-aligned militias in southern Yemen. In late January, demonstrations had erupted in Aden over the UAE-backed Security Belt militia’s alleged involvement in forced disappearances of Yemeni civilians. In March, protests broke out again in Aden in response to the slaying of Raafat Danbaa, a witness who had testified against several UAE-aligned soldiers in the alleged 2018 rape of a young boy. After testifying, Danbaa allegedly was abducted, shot and killed by UAE-backed forces.

The unresponsive attitude of Emirati officials to these demonstrations and the perception of the UAE as an occupying force caused protests to spread across southern Yemen. In mid-June, demonstrations broke out in Shabwah governorate that featured banners opposing the UAE’s “occupation” of the region. On July 1, popular unrest intensified on the island of Socotra, where demonstrators raised the Yemeni flag and decried the UAE’s alleged destabilization of the island. Atef al-Sokotri, an activist participating in the Socotra demonstrations, described the July 1 protests as the “largest in the history of Socotra,” and linked them to the unpopularity of the UAE-aligned Security Belt militias.

Although Emirati media outlets described the protests as a rejection of “outside forces,” the UAE’s continued military presence in southern Yemen galvanized Houthi and Salafi opponents of Abu Dhabi’s conduct. Activist Hussain Albukhaiti, for example, stoked anti-UAE sentiments by accusing Abu Dhabi of trying to control southern Yemen’s coast and reminding the local population of the Dubai Ports World’s failed ownership of Aden’s port facilities from 2008 to 2012. Dubai Ports World is a UAE state-owned company.

Mehran Qubati, a prominent Salafi cleric, recently accused the UAE of threatening a coup d’etat against Yemeni President Abed Rabbo Mansour Hadi and the Fourth Brigade, which is tasked with protecting the president. Though the UAE/Saudi coalition’s original goal was supposedly to back Hadi and unify the country, the UAE supports the Southern Transitional Council goal of autonomy for the south.

As southern Yemen is a vital base for the UAE’s power-projection ambitions in the Red Sea and Horn of Africa, Abu Dhabi wants to ensure that Yemenis in the south don’t embrace anti-UAE factions, and that the Southern Transitional Council maintains control over Aden. To rebuild its image in southern Yemen, the UAE wants to counter accusations that it is an occupation force seeking to sow disunity in Yemen. By tactically reducing its military presence in the south, the UAE is attempting to redirect attention toward its efforts to advance the cause of southern Yemeni autonomy.

As the UAE’s drawdown from Yemen has been accompanied by a transition from a “military-first” to a “peace-first” strategy, Abu Dhabi is seeking to win popular support in southern Yemen through active participation in the UN peace process. A former Yemeni diplomat living in Washington told Al-Monitor that the UAE would be likely to support political negotiations to establish a north-south confederation that grants southern Yemen autonomy.

The UAE intends to replace its troops with a 52,000-strong southern Yemeni army of 25 to 35 brigades trained by Emirati technical advisers. Lt. Col. Mohamed Salem al-Boher, commander of the Shabwani Elite Forces, a group armed and trained by the UAE, told Al-Monitor the UAE had increased its support for local militias in Aden, Shabwah and Hadhramout in recent months. According to Boher, the UAE’s expanded support allowed local military forces to “make huge progress against terror” in Shabwah province, and local militias now have the “skills, training and equipment” to defend their territory.

Boher’s comments align closely with the UAE government’s position on southern Yemen’s military readiness. An Emirati official told Reuters on July 8 that the UAE was “not worried about a vacuum in Yemen,” as the UAE military training program is “one of its major successes in Yemen.” The transformation of Mukalla from an stronghold of al-Qaeda in the Arabian Peninsula to a city with rising land prices and growing external investment also supports the UAE’s narrative that it has left southern Yemen well-placed to function as an autonomous region.

While Abu Dhabi’s partial drawdown from southern Yemen could rehabilitate the UAE’s image in the region, that gambit is fraught with risks.

Though the UAE supports autonomy for southern Yemen, the Southern Transitional Council says 80% to 90% of southern Yemenis support independence — sovereignty as opposed to just self-rule. While that figure might be exaggerated, it is widely believed that the majority do want independence. The UAE is unlikely to accede to the council’s independence demands, as Saudi Arabia supports a unified Yemen. If the UAE refuses to back southern Yemeni independence, the council could diversify its diplomatic partnerships away from its current reliance on Abu Dhabi and weaken the UAE’s hegemony in Aden.

The UAE troop drawdown can be explained in part by concern for its international reputation as the humanitarian crisis there continues, and by internal frustrations with the stagnant progress of the Saudi-led military intervention. But the rising unpopularity of Abu Dhabi’s military presence in southern Yemen has also shaped its policy change and transition to focus on a diplomatic resolution to the Yemeni civil war. It no doubt hopes its tacit support for southern Yemen autonomy can help it rebuild its image in this strategically important region.