The Saudi Arabia-UAE coalition intervened in the war in Yemen to restore the government’s seat in Sanaa, but today fighting between proxies for Riyadh and Abu Dhabi could topple the same government in the temporary capital of Aden. 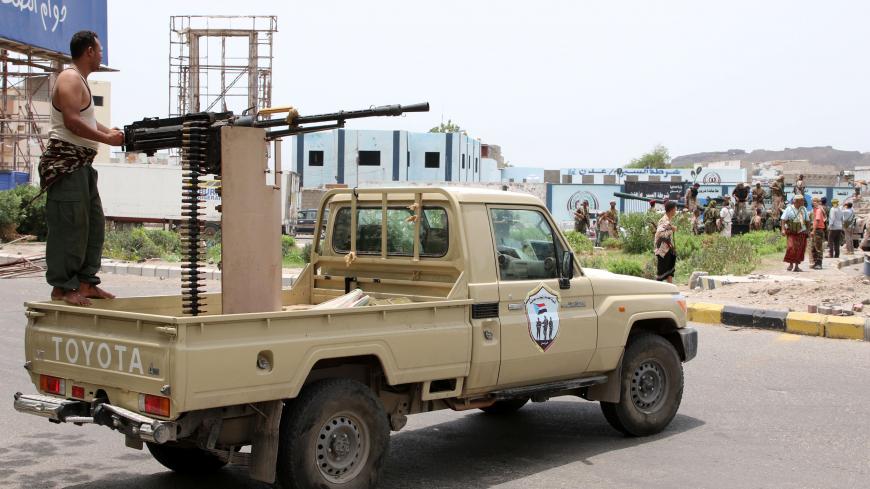 BEIRUT — Battles and divisiveness keep spreading like wildfire in Yemen amid regional tension ravaging its security and stability, as no clear, serious international stances are taken. Consequently, several authorities have emerged in one country, forming different forces instead of one cohesive army.

Fierce battles have erupted in southern Yemen between the internationally recognized government and the UAE-backed Southern Transitional Council (STC), after the latter announced a coup against the prior on Aug. 7 and took control of the temporary capital of Aden and Abyan governorate on Aug. 10.

Later on, the STC moved directly east toward the oil- and gas-rich Shabwah governorate, which is quite different from Aden and Abyan in terms of complex geography and solid Bedouin demography. The STC then overstepped the unspoken influence quota between Saudi Arabia and the UAE in the south and suffered a resounding defeat there.

It is noteworthy that the UAE is extending its influence on the ports of Aden, Mocha, Bab el-Mandeb, and the strategic islands of Miyun and Socotra, while Riyadh is strongly present in Shabwah, Mahra, and Wadi Hadhramaut eastern Yemen.

The STC took a risk by heading to Shabwah without Saudi-UAE cover, but so did the government forces by returning to Aden and Abyan. After its victory in Shabwah, the legitimate government tried to retake Aden and Abyan, crossing the red lines laid out by the Saudi-UAE alliance in its Aug. 26 joint statement. The statement called for a cease-fire in southern Yemen and to bring the two sides together at the Jeddah conference. Consequently, the UAE intervened in Aden by carrying out airstrikes against pro-government forces Aug. 29.

Yemen’s Ministry of Defense condemned the UAE airstrikes on government forces in Aden, its surroundings and the city of Zinjibar in Abyan province, saying they resulted in the deaths of over 300 people and wounded members of the armed forces, calling on Saudi Arabia to “stand beside the legitimate government and hold those responsible accountable.”

Meanwhile, the Yemeni Foreign Ministry condemned the UAE's airstrikes on the legitimate government forces, blaming the UAE for the blatant and illegitimate targeting that contradicts international norms.

It added that it “reserves the legal right guaranteed by international law and the UN Charter to take all necessary measures to stop this serious escalation,” while calling on the UN Security Council to “condemn this blatant targeting and assume responsibility for maintaining security, peace and unity in Yemen.”

The UAE Ministry of Foreign Affairs and International Cooperation responded in a statement, “A direct threat to the security of the [Arab] coalition forces necessitated the targeting of terrorist militias with precision airstrikes.”

The Yemeni presidency statement, which followed the three statements, accused the UAE of “seeking to divide Yemen,” adding, “We will not be intimidated by the planes of those who target our land.”

The joint operations room of the Saudi-UAE alliance, which controls military flights and is stationed in Saudi Arabia, has remained suspiciously silent regarding the UAE airstrikes. This shows Saudi complicity toward the UAE’s military intervention in order to weaken the Yemeni legitimate government and serve a joint Saudi-UAE interest to share influence in Yemen before any negotiations with the Houthis.

Al-Monitor was unable to obtain a comment from Saudi or UAE officials.

These regional developments in Yemen took place amid international calls to move forward in achieving peace. During a meeting with Saudi Deputy Defense Minister Prince Khaled bin Salman on Aug. 28 in Washington, US Secretary of State Mike Pompeo called on the Saudi-led Arab coalition to negotiate with the Houthis. This is proof that the current US administration aims to stabilize the situation in Yemen ahead of the US elections.

In addition, the Security Council issued a statement on Aug. 29, expressing concern about “recent developments in south Yemen, including the violent attempt to take over state institutions.” The statement called for “political settlement that engages all parties in an inclusive dialogue to resolve differences and address the legitimate concerns of all of Yemen’s people, including those in the country’s south.”

Abdul Rahman Ashwal, an adviser to the Yemeni Embassy in Beirut, told Al-Monitor, “The UAE's participation in the Arab coalition must be corrected. A complaint must be lodged to the Security Council against Abu Dhabi’s recent violations that have affected Yemen's sovereignty and targeted the internationally recognized government forces.”

He added, “The alliance between Riyadh and Sanaa is ongoing, and cooperation will continue in isolation from the UAE’s participation until all Yemeni territories are liberated, the Houthi-STC coup comes to an end and the state extends its influence on all Yemeni soil.”

Ashwal noted, “There are no differences between Saudi Arabia and the UAE in Yemen. The current dispute is a Yemeni-Emirati one,” adding, “The Saudi stance is clear and Riyadh is still taking it upon itself to support the legitimate government and it is making a lot of sacrifices in order to do so.”

Faisal Ali, head of the Yemeniyoon Center for Studies based in Kuala Lumpur, told Al-Monitor, “The legitimate government has been nonchalant toward the UAE’s action since the beginning, which allowed the latter to openly express its hostile stance,” in reference to the latest airstrikes.

He added, “Riyadh's silence on Abu Dhabi's bombardment of the government forces in southern Yemen signals collusion with the UAE and a bilateral agreement to weaken the legitimate government.”

Ali noted, “Riyadh fears a Yemeni renaissance, which had been ushered in the youth revolution in 2011. It also seeks to control a port in the Arabian Sea and acquire Yemen's resources in the border areas between the two countries. Meanwhile, the UAE aims to impose a fait accompli by supporting the militias to take advantage of Yemeni ports and islands.”

The Saudi-UAE coalition intervened in 2015 under the pretext of restoring legitimate authority to the official capital Sanaa and ending the Houthi coup. But nearly five years later, it carried out another coup against the legitimate government in the interim capital of Aden, losing credibility even among its supporters and rather serving its supposed opponents, the Houthis.