South Yemen in tumult as Yemen government, separatists face off in Abyan

Saudi-backed government forces in Yemen launched an offensive in the southern province of Abyan against UAE-backed southern secessionists who declared self-rule in the southern governorates last month. 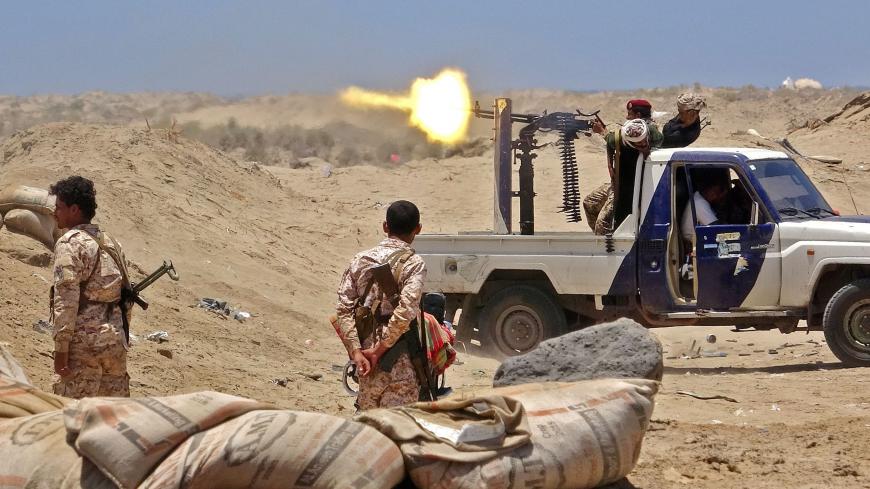 Fighters from of the Southern Transitional Council fire toward the positions of Saudi-backed government forces during clashes in the Sheikh Salim area in southern Abyan province, May 11, 2020. - NABIL HASAN/AFP via Getty Images

The conflict in south Yemen escalated abruptly over the last few days, undoing progress in the peace effort and risking a rise in armed confrontations in southern provinces.

On May 11, ferocious armed clashes between Yemeni government forces and southern separatists broke out in Abyan province in southern Yemen. Government forces led an offensive on the outskirts of the separatist Southern Transitional Council (STC)-controlled Zinjibar, the capital of Abyan, in a bid to recapture it.

The government forces were driven out of the city in August when STC forces managed to take over Zinjibar, overpowering opposing military units. So far, the city is under the hold of the separatists who fight for seceding from Yemen’s north and restoring the former independent state that unified with the north in 1990.

The fighting continued through the weekend in Abyan province. At least 14 fighters were killed on Saturday when pro-government troops attacked the STC forces near Zinjibar, roughly 60 kilometers (37 miles) from Aden in the country’s south, AFP reported.

This recent escalation comes about two weeks after the STC declared self-rule of the southern provinces, a move that aroused the anger of the government and was met by rejection from many countries, including the United States and Saudi Arabia. The self-rule declaration sparked the latest strife in Abyan and tensions across south Yemen.

Though the two sides signed a power-sharing agreement in Riyadh in November 2019, the conflict remains intense and flames are threatening to ignite the south. The STC has had the upper hand in Aden, Abyan, Dhale and Lahj province since August 2019, when the government lost the battle thanks to the Emirati airstrikes, which killed and wounded about 300 government soldiers in Aden and Abyan.

Now a new battle has kicked off in Abyan and the government forces’ eyes are set on Aden, the interim capital, amid fierce resistance by the STC fighters. The government is inclined to use force and regain what it lost to the STC since last year.

On May 14, Yemen’s Prime Minister Maeen Abdulmalik said the key to restoring peace in Yemen is to restore the country and its institutions and end the armed militia rebellion. Meeting with the UN Security Council’s five permanent member states, Abdulmalik said, “Rejecting the calls to withdraw the so-called self-rule and the continued escalation will oblige the state to take deterrent measures.”

He also stated, “When the government acts wisely and rationally, that does not mean it is weak.”

He said, “We have been patient throughout the previous period and avoided responding to all violations committed by the government out of respect for the agreement sponsored by Saudi Arabia.” The Yemeni government has disrespected the agreement, according to Zubaidi, accusing it of adopting “chaos and terrorism.”

Up to May 13, the government forces held a strong position on the battleground and have made some gains. But the course of the battle could suddenly shift.

The government’s Abyan-Ataq military axis released a statement on May 13, saying that the separatists endured “heavy losses.” The statement went on, “The army managed to take over 12 armored vehicles and four tanks, one of which is affiliated with the Emirati army. In addition, the army seized eight pickups and took 13 of the militia elements as captives.”

Political observers have said the government push would not have happened without Saudi approval. Aden-based political analyst Abdulraqeeb al-Hidiani told Al-Monitor, “Saudi Arabia has granted the government forces a green light and tremendous support to end the rebellion of the STC.”

Hidiani added, “The battle that is taking place in Abyan would be incomplete without taking over and restoring Aden. Saudi Arabia clearly stands by the Yemeni government because it has used all means to persuade the STC to implement the Riyadh agreement, but to no avail.”

Khalil Muthna al-Omary, the editor-in-chief of Rai Alyemen news site, sees the current fighting as a reflection of rivalry between the United Arab Emirates (UAE) and Saudi Arabia. He told Al-Monitor, “Riyadh backs [President Abed Rabbo Mansour] Hadi’s forces while the Emirates supports the STC with weapons and advanced military equipment. The STC leadership releases its statement from Abu Dhabi and the Yemeni government declares its statements from Riyadh.”

Omary expects Riyadh and the international community will not allow the battle to reach Aden for the time being, given the calamitous situation in the city.

Yemeni authorities declared Aden a "disaster city" on May 11 with dozens of deaths reported every day. Diseases have increased with the rainy season, which struck the city last month. Sanad Gameel, the head of the civil affairs authority in Aden, said that 70 deaths were reported May 13 and 600 people have died since May 1.

Aden, which is only 35 miles from the ongoing battle in Abyan, has been plagued by a devastating health crisis. Up to May 14, Yemen’s Supreme National Emergency Committee for Combating COVID-19 said that 48 coronavirus cases have been reported in the city since April 30. The number of positive cases in Yemen could be higher if tracking and testing capabilities were better.

As the war continues to undermine health authorities and hinder health services, the World Health Organization has said the spread of COVID-19 will be a “catastrophic” disaster in Yemen. Altaf Musani, WHO representative and mission chief in Yemen, said in a May 13 interview with Anadolu Agency, “This health system will never be fully prepared because we've had five years of war and that conflict, that vulnerability and that fragility have really weakened the health system to deal with routine health matters such as cholera, dengue and malaria."

Now Yemen faces twin life-threatening crises: escalating war and widespread sickness. “Anyway, this proxy war has ruined the security and stability in the country. The new threat is the coronavirus pandemic, which will make the situation in Yemen more complicated,” said Omary.