Will formation of new government in Yemen lay groundwork for peace?

Despite agreeing to a cease-fire in south Yemen, it seems the chances of ending the conflict between the Saudi-backed government forces and the UAE-backed southern separatists and forming a new government are dim. 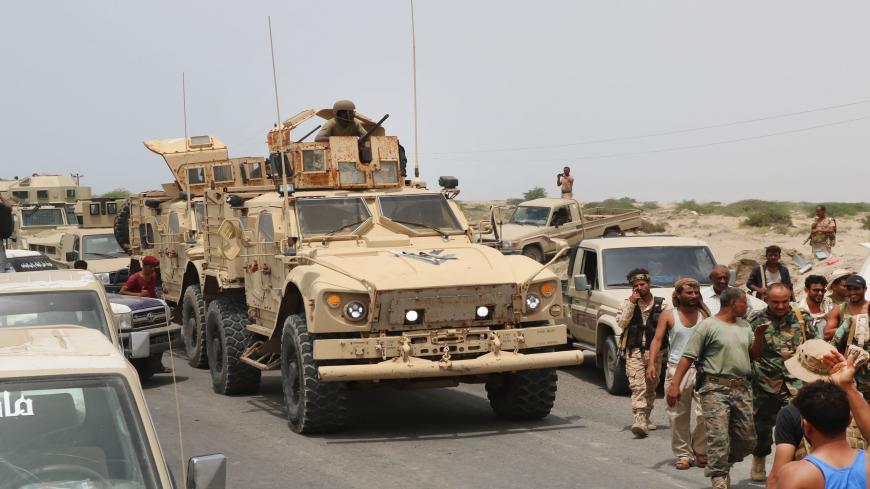 Yemeni government officials and the Southern Transitional Council (STC) have engaged in tough negotiations in Riyadh in a bid to form a new Yemeni government divided equally between Yemen’s south and north. This step is part of the Riyadh Agreement that the two sides signed in November 2019 under the auspices of Saudi Arabia — but they failed to implement it over the last seven months.

Since August 2019, the scene in the south has been tumultuous as the United Nations-recognized government has lost control of Aden, Abyan, Dhale and Lahj. Last month, the separatists seized Socotra island, dealing another blow to the Yemeni government. The separatists’ complete takeover of the island infuriated the Yemeni government, unleashing a wave of criticism against the Saudi-led Arab coalition, and triggered a cycle of violence between the government forces and separatist fighters in Abyan province.

While the presence of the Yemeni government keeps waning, the United Arab Emirates-backed separatists continue building further political and military muscle in the south. The STC’s April declaration of self-rule in the south ushered in a new reality in the political arena and made the diplomatic solution tougher than before.

In view of these escalations, Saudi Arabia declared June 22 that the government and the STC had agreed on a cease-fire and would begin talks on implementing the peace deal. Moreover, the coalition deployed observers to Abyan to monitor the cease-fire and help stem the fighting.

The statement read, “The Coalition calls on all Yemeni political, social and media components and powers to support the parties’ response to convene a meeting in Riyadh, and work diligently to implement the Agreement.”

While the Saudi pressure may end up in the formation of a new Yemeni government, it is not a guarantee that the coming government will bury the conflict in Yemen’s south and bridge the schism between the two sides. The gap is extremely wide and challenges abound, according to political observers.

Majed al-Daare, political commentator and the editor-in-chief of Moragboonpress, said the hope for the success of the government formation is dim, and there is a slim possibility of seeing a successful 50-50 government divided between the STC and the government.

He told Al-Monitor, “All indicators on the ground confirm that the two sides do not like any political solution and that they are betting on the military solution, which is also still impossible. I do not expect the success of any deliberations or the formation of any joint government as long as the war continues between them until today, and as long as the government is fighting in the south instead of fighting the Houthis in the north.”

He added, “The government believes that the south is a priority and taking over of Aden is more important [than] recapturing Sanaa from the Houthis.” The Yemeni government and southern separatists are nominal allies fighting the Houthi movement that controls the majority of Yemen’s north, and their alliance has been ruined given their power struggle in the south.

World powers including the United States and France have displayed support for the power-sharing Riyadh agreement between the Yemeni government and the separatists. Early this month, the US and French ambassadors to Yemen emphasized the need for implementing the agreement during a meeting in Riyadh with Sultan al-Barakani, speaker of the pro-government Yemeni parliament, according to the state-run Saba news agency.

Some observers oppose the implementation of the agreement, indicating that such an agreement will weaken the government further. Aref Abuhatem, a Yemeni political analyst, reckoned that the Riyadh agreement will yield counterproductive results. He tweeted, “The formation of the government before ending the [STC] coup, the handover of Socotra, handover of weapons and abolishing the self-rule declaration will break the back of the legitimate government and threaten the national security of neighboring countries including Saudi Arabia.”

The nature of the conflict in Yemen’s south is not limited to fighting over state positions. However, it is a battle between a political group that seeks to create an independent state in the south and a fragile government that struggles to keep the north and south united as one country.

At the grassroots level, optimism about the success of any coming 50-50 government is low. Fawaz Ahmed, a local resident in Aden, said he no longer believes in peace talks on Yemen. “The government and Houthis have negotiated several times over the last five years, and we have not felt any positive result. Now the government and the STC have just started the negotiations and I do not expect a quick end of their faceoff,” Ahmed told Al-Monitor.

Ahmed said he does not care who takes over Aden — the government or the separatists. “We need to live in security in Aden and have access to basic services including health care, water and electricity. We want anyone who will be accountable, and not just hungry for power.”

Amar Saleh, a school teacher in Sanaa, said he expects the formation of the government but he does not expect lasting peace. He told Al-Monitor, “I have reached a level of absolute distrust in the political elites. When they talk about peace or government overhauls, we [civilians] understand that our living condition will not improve or it will be worse.”

Mark Lowcock, the United Nations' undersecretary-general for humanitarian affairs, wrote in an article published June 27 that Yemen is experiencing the “darkest moment” he has seen. “The long-term solution to the tragic problems we see now in Yemen is peace,” Lowcock said. However, the ultimate peaceful solution is still hard to reach.

The political scene in Yemen is chaotic and frontlines are ablaze in the north and south. The humanitarian situation is disastrous, particularly with the spread of the coronavirus and the shortage of aid funding. The coming government may defuse tensions for some time, but it remains to be seen if it can extricate Yemen — at least the southern part — from the conflict.