Saudi Arabia and the United Arab Emirates are seeking to divide power and influence in Yemen, which is clear following the recent UAE-backed advances of the southern separatists' militia amid Saudi silence. 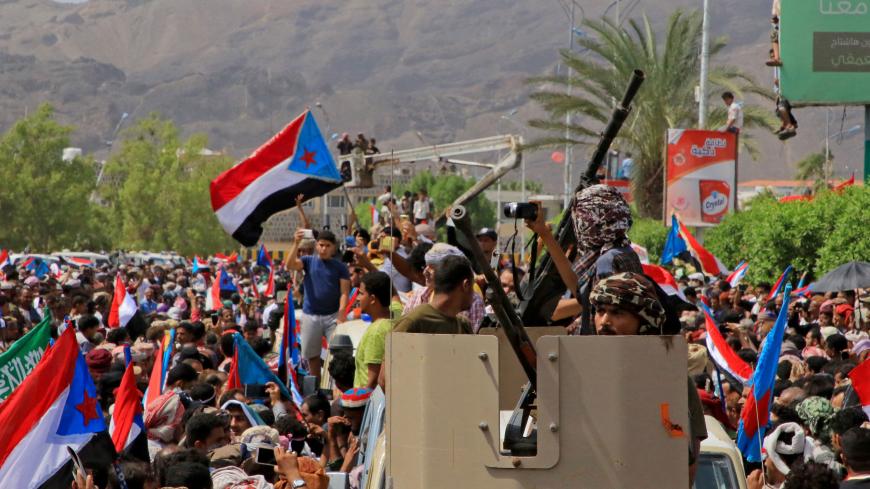 As changes in Yemen develop rapidly this week, the situation is raising questions about security, loyalty and what's coming next. But one thing seems clear: Saudi Arabia and the United Arab Emirates (UAE) are determined to guarantee their interests in the exploited, proxy-war-torn country.

On another front, a US Reaper drone was shot down south of Houthi territory in Yemen, US officials said Wednesday, though it was unclear immediately who was responsible or what country was operating the device. Some reports said Washington was blaming Iran, which the United States accuses of supporting the Houthis; others simply said the incident was still being investigated.

Also Wednesday, a delegation headed by STC president Aidaroos al-Zubaidi arrived in Jeddah, Saudi Arabia, to take part in Saudi-sponsored talks with the recognized Yemeni government. The coup split what had been an alliance between the Saudi-backed government of President Abed Rabbo Mansour Hadi and the UAE-supported STC against Houthi rebels. The rebels ousted Hadi's government in 2014.

Hadi's government holds the UAE responsible for the current STC successes. Thanks to the UAE's financial support, armament and training, the STC has 90,000 military and security personnel.

On Aug. 7, STC vice president Hani Ali Brik called on all these forces to seize all government institutions and completely take over Aden. Brik’s call came amid public sympathy in southern Yemen after the death of the commander of the Security Belt — the STC’s military wing — Brig. Gen. Munir al-Yafei, also known as Abu al-Yamamah. Yafei was killed when Houthis launched a ballistic missile and drone at an Aug. 1 military parade in Aden’s al-Galaa camp. Brik claimed that pro-government forces conspired with the Houthis long enough to execute the attack and thus create a pretext to stage a coup and spread chaos in southern Yemen.

Yemeni Minister of Interior Ahmed al-Maysari claimed that the UAE deployed 400 armored cars. He also criticized the Saudi position toward the events in Aden, saying its forces at first remained silent — only to adopt a position in line with Abu Dhabi later on: They both expressed “concern” over the Aden developments.

The situation there has destabilized Yemen’s unity, security and stability and to an extent threatens the alliance between Saudi Arabia and the UAE.

The STC issued a statement Aug. 15 that said, “Southerners aim to reestablish the Independent Federal State of the South. This is a definite, irreversible choice. We are working on liberating the remainder of Hadhramaut Valley, Bayhan, Mekras and any other area of the south suffering from occupation and terrorism” under the Hadi government.

Abdul Salam Mohammad, director of the Sanaa-based Abaad Center for Studies, told Al-Monitor, “If the Saudi-led Arab coalition continues to back coups, Yemen will be at risk of division and chaos. The coalition’s actions in Yemen will affect the stability and security of the Gulf.”

Mohammad, who believes Abu Dhabi opposed the Arab Spring, said, "Its actions in southern Yemen are just an extension of this opposition against democracy and moderate Islamists. Abu Dhabi is also making political and economic gains by increasing its influence as a regional player in Yemen.”

The talks between the STC and the Yemeni government in Jeddah will serve the interests of both Saudi Arabia and the UAE. Riyadh will work on maintaining the presence of the legitimate government in Yemen to preserve the legitimacy of the Saudi and Emirati intervention in the country. Meanwhile, Riyadh will turn a blind eye to the new reality imposed in Aden for several reasons, mainly the division of power between Saudi Arabia and the UAE.

Al-Monitor learned from sources close to decision-making circles that Riyadh is keen on preserving its presence in northern and eastern Yemen, while Abu Dhabi is more interested in the country's islands and ports in the south. The Saudi-UAE coalition also wants to keep the government and STC pitted against the Houthis in any upcoming negotiations.

The rules of the game are changing in Yemen. Yet, the Riyadh-Abu Dhabi coalition will work to halt the STC’s separatist demands, having shown since its intervention in Yemen in March 2015 that it doesn't support unity or separatism. It's neither keen on restoring legitimacy nor bringing down the Houthis. Instead, it manipulates the conflict to keep Yemen weak and reap the resulting economic and geopolitical benefits.

by Ismail BELLAOUALI with Philippe AGRET in Rabat and Marie GIFFARD in Madrid | AFP | Jun 24, 2022
END_OF_DOCUMENT_TOKEN_TO_BE_REPLACED