The seizure of Aden by Yemeni separatists threatens to fracture the Saudi-led coalition. 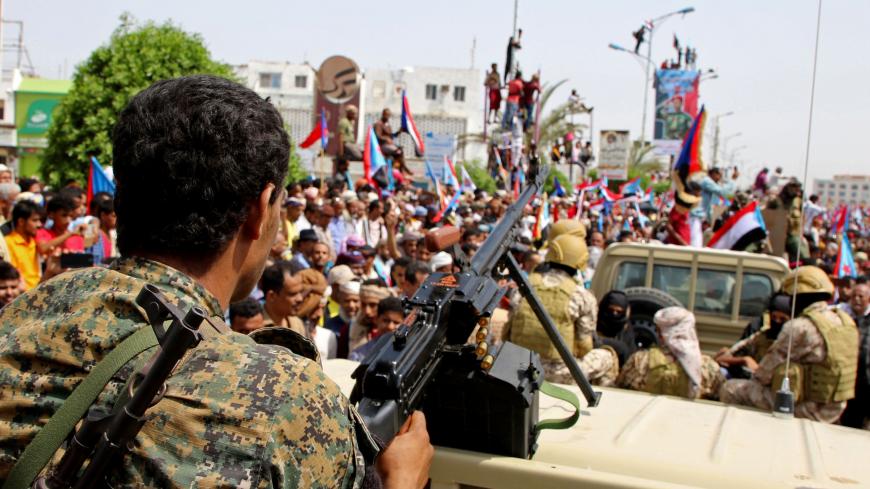 Members of UAE-backed southern Yemeni separatist forces are seen together with their supporters as they march during a rally in the southern port city of Aden, Yemen, Aug. 15, 2019. - REUTERS/Fawaz Salman

SANAA, Yemen — The objective behind the latest Houthi attack on Yemen’s southern city of Aden was to drive a wedge between Saudi Arabia and the United Arab Emirates, the main partners in the Arab coalition battling the rebel group since 2015.

More than 36 people were killed when Houthis launched a ballistic missile at a military parade in Aden Aug. 1, including a commander of the UAE-backed southern separatists, Brig. Gen. Munir al-Yafei.

Flaunting the success in creating a rupture between allies of the Arab coalition, Ahmed al-Moaiad, a senior Houthi political figure based in the UK, tweeted Aug. 10: “One rocket to al-Jalaa camp [in Aden] completely changed the face of the map.”

The Houthi rebels quickly claimed responsibility for the attack. Yet the southern separatists sought revenge for the death of Yafei, accusing the forces loyal to the internationally recognized government of conspiring with Houthis and giving them information about the location and attendees of the military parade.

However, the STC’s seizure of Aden was in the interest of the Houthis, as the Arab coalition was threatened. The Iranian-backed rebel group has helped divide the UAE, which backs the STC, and Saudi Arabia, which supports the pro-government forces.

Houthi official Hussein al-Ezzi tweeted Aug. 10, “Now that the government of the hotels and 'illegitimacy' [in reference to Yemeni government based in Riyadh] … has ended, what’s next?”

The Houthis were gloating that another Yemeni armed force — the separatists — had given up on President Abed Rabbo Mansour Hadi, putting his legitimacy at stake.

The fall of Aden to the STC was a heavy blow to both Hadi and the Arab coalition, which seeks to reinstate the latter’s government in the rebel-held capital of Sanaa.

Yemen’s conflict began in 2014, when Houthis took over the country’s northwest, including Sanaa. Hadi fled south to Aden, and a coalition led by Saudi Arabia and the UAE came together to fight the rebels.

The Houthis’ gains were reflected in an Aug. 11 visit of a Houthi delegation to Iran, headed by the group’s spokesman Mohammad Abdul Salam. The delegation met with Iranian Foreign Minister Mohammad Javad Zarif to discuss ways of strengthening bilateral and diplomatic relations.

After the meeting, Zarif headed to Qatar. Hadi’s government severed ties with Qatar in 2017 along with the so-called Anti-Terror Quartet of Saudi Arabia, the UAE, Egypt and Bahrain over Doha’s support for “militants and Iran.”

Meanwhile, the Houthis appointed an ambassador to Iran Aug. 17. The appointment followed a meeting between a Houthi delegation and four European ambassadors in Tehran. Hadi decided to sever diplomatic relations with Iran in October 2015.

Former Minister of Culture Khaled Rowaishan, who served in 2006 under late President Ali Abdullah Saleh, warned against Aden's fall Aug. 10, saying it will affect both Riyadh and Abu Dhabi.

As some Saudi experts and analysts expressed support for the fall of Aden and the division of Yemen, Anees Mansour, media adviser at the Yemeni Embassy in Riyadh, tweeted: “How would you respond if Najran, Jizan and Asir [in Saudi Arabia] demanded secession and had political and legal justifications?”

STC spokesman Nazar Haitham told Al-Monitor that the Houthis are still their “big enemy,” denying that the coalition is aligned with them. Haitham also rebuffed claims that the separatist attack on the Saudi-backed government forces came at the order of the UAE, in light of a recent security agreement signed between Abu Dhabi and Tehran.

Haitham added that the Houthi attack on the parade was the result of a conspiracy with the Houthis. He accused some pro-government elements, namely members of al-Islah party, of providing intelligence to the Houthis regarding the military parade.

Al-Islah party (Yemen’s Muslim Brotherhood) supports Hadi’s government and fights alongside the Saudi-led coalition. But the UAE has designated the party a terrorist group.

Mohammed Ali al-Houthi, a controversial political figure and a member of the Houthis' Supreme Political Council, tweeted Aug. 13 that a Houthi delegation was invited to Iran to discuss what was agreed upon with the UAE.

During said meeting, Iran’s Supreme Leader Ayatollah Ali Khamenei renewed his support for the Houthis, and accused Iran's foes of a “plot” to partition the country. “This plot should be strongly resisted, and a unified, coherent Yemen with sovereign integrity should be endorsed,” Khamanei said. He called for “domestic dialogue” and accused the Saudis and Emiratis of committing “war crimes” as the West exhibits “indifference.”

Al-Monitor reached out to Abdel Malak al-Ejri, a member of the Houthi delegation that visited Iran, but he did not respond to an inquiry via WhatsApp to comment on the aim of the visit.

However, Haitham claimed that the separatists attacked pro-government forces “in self-defense” because of “the provocation and the targeting of civilians by pro-legitimate forces.” He pointed out that Hadi’s forces “involved terrorist elements,” which forced them to “interfere to prevent the targeting and protect the citizens.”

Responding to the initial reports of Aden’s seizure, the Foreign Ministry at the Saudi-backed government described the move as a “coup” in a statement released on its official Twitter account.

Shortly before midnight on Aug. 10, the Saudi-led coalition issued a statement calling for an immediate cease-fire in Aden, asserting that it will use military force against violators of the cease-fire.

Early morning on Aug. 17, the coalition said that STC troops started to withdraw and return to their original positions in Aden. However, Reuters said this was limited to some government buildings but not military camps.

Haitham did not answer a question on whether the separatists withdrew. Al-Arabiya cited a Yemeni government source as saying that a Saudi-UAE committee arrived in Aden Aug. 15 to oversee the withdrawal of southern separatist troops from positions they had seized.

However, on Aug. 10, Reuters learned from three officials that the delay in convening a summit in Saudi Arabia between the STC and Hadi’s government is due to the refusal of the separatists to hand back control of the Aden port. Saudi Arabia had called for a summit between the two parties to discuss a government reshuffle that would include STC representatives.

Deputy Prime Minister Ahmed al-Maysari is already in Saudi Arabia for talks with the STC.

Releasing a video from Aden before boarding a Saudi plane that would take him and his aides to Riyadh Aug. 10, Maysari acknowledged that the UAE won in Aden. He criticized Saudi Arabia’s silence on the developments in Aden.

Although Brik had refused talks as long as the Saudi-led coalition threatened to use force against the separatists, STC head Gen. Aidaroos al-Zubaidi reportedly arrived in Jeddah Aug. 20 to attend a summit with the Saudi-backed government amid clashes in Abyan province.

Three civilians were killed and nine others wounded in clashes between STC and government forces in Abyan province Aug. 20. The STC managed to seize government camps in the province.

All these developments in southern Yemen have raised concerns over the future of the nominal allies that have fought the Iranian-backed Houthi rebels for the past four years. Many ask whether Saudi Arabia and the UAE will manage to end the rift in Aden.

Yet, as the parties failed to uphold a cease-fire in Aden and as attempts to hold talks in Jeddah are stalled, civilians in Yemen continue to suffer amid the world’s worst humanitarian crisis.