Hopes for a negotiated solution to the dispute in Aden vanished with Saudi Arabia calling on the UAE-backed separatists to withdraw from government institutions in the southern Yemeni city. 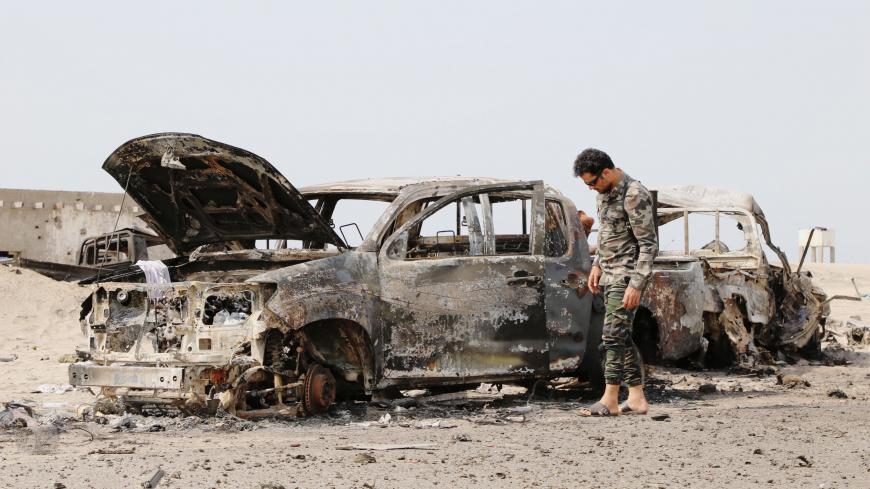 SANAA, Yemen — Precarious calm is prevailing in Aden province after reported UAE and Saudi airstrikes launched to back each side of a separatist conflict in southern Yemen, further deepening the rift within the Arab coalition that formed to fight the Houthi rebels who were largely in the north. Meanwhile, indirect dialogue in Jeddah, Saud Arabia, between the Saudi-backed and internationally recognized Yemeni government and UAE-backed southern separatists has reached a deadlock.

Aden has been witnessing fighting between the internationally recognized government and the southern separatists since Aug. 10, when the latter seized control of Aden city. The UAE-backed separatists then moved toward Abyan and Shabwa provinces, ignoring Saudi-led coalition calls for a cease-fire and withdrawal from government institutions they had seized.

Shortly after the separatist-affiliated Elite Forces deployed in Attaq, the capital of the oil-producing province of Shabwa, and called for a cease-fire Aug. 24, government forces launched a counterattack in the city that forced the Elite Forces to withdraw.

On Aug. 27, forces loyal to the Saudi-backed government began moving from eastern Shabwa toward neighboring Abyan, which they recaptured early Aug. 28 before moving southwest to Aden.

Local news websites affiliated with the Islah Party, loyal to President Abed Rabbo Mansour Hadi, claimed that Saudi Arabia launched airstrikes Aug. 28 in support of government forces against the separatists, targeting the separatists' reinforcements in Lahij and gatherings in Aden.

Murad Abdo, a journalist based in Aden, denied these reports. “This is not true at all,” Abdo told Al-Monitor, pointing out that these news outlets are “pro-Islah” and publish baseless reports.

However, Abdo confirmed airstrikes launched by the UAE against Hadi’s troops, whom he labeled as “terrorist elements who started to establish checkpoints at Aden's entrance.”

There have been conflicting reports about the battles in Aden.

On Aug. 29, the UAE launched airstrikes against Saudi-backed government forces stationed at a checkpoint at Aden's entrance. The Yemeni Defense Ministry condemned on Twitter the UAE for launching airstrikes that “killed or injured about 300 soldiers.”

In a rare statement issued Aug. 29, Hadi urged Saudi Arabia “to rein in the UAE.” He further condemned Abu Dhabi for its “blatant intervention” in Yemen by providing “support, money and plans” for separatists who aim at “dividing up” the country.

The exchange of accusations between the government and the UAE point to a widening rift between Riyadh and Abu Dhabi; it seems the accusations were limited to official statements only, as the mainstream media in both countries largely avoided the subject.

Yemen's Foreign Ministry said on Twitter that it had asked the UN Security Council “to hold a session on the blatant shelling by UAE” against government forces.

This statement wasn't published by UAE-owned Sky News Arabia, and the Saudi-owned Al Arabiya channel reported on the issues in an article that used careful language and at times only hinted at accusations.

While Al Arabiya published the UAE Foreign Ministry's statement that confirmed the airstrikes in Aden, the nature of the report drew much criticism from Hadi’s supporters.

“Saudi media celebrated the statement of the UAE’s Foreign Ministry,” tweeted Anees Mansour, media adviser at the Yemeni Embassy in Riyadh. “And refused to deal with the crime of the UAE aircraft bombing [of Hadi’s troops], and the statement of President Hadi and statements of ministers of the legitimate government.”

In a statement Aug. 29, the UN Security Council expressed concern over the recent developments in southern Yemen, calling on “all involved parties to show restraint and preserve the country’s territorial integrity.”

The council fully supported the efforts of the UN secretary-general's special envoy for Yemen to work with the parties to “pave the way for the resumption of comprehensive negotiations, without delay, on the security and political arrangements necessary to end the conflict and resume a peaceful transition.”

The situation further escalated when the UAE-backed Southern Transitional Council and the Saudi-backed government refused to attend Saudi-sponsored talks. On Aug. 21, Hadi’s government said it would not hold talks with the separatists unless they hand back control of the port of Aden.

Meanwhile, on Aug. 30, US Secretary of State Mike Pompeo met with Saudi Deputy Defense Minister Khalid bin Salman during his visit to Washington. Pompeo stressed the need for a negotiated resolution to the dispute in Aden, according to a State Department statement.

On Sept. 4, Saudi Arabia hosted indirect talks between the two parties in Jeddah, while the government ruled out any talks with the separatists, holding on to its condition that they withdraw from the government's institutions in Aden.

UN envoy Martin Griffiths hailed the meeting held in Saudi Arabia, saying on his Twitter account, “I am very supportive of the talks being held in #Jeddah under the auspices of” Saudi Arabia. He encouraged the government of Yemen and the Southern Transitional Council “to seize this opportunity and settle their differences through peaceful means.”

On Sept. 8, Saudi Arabia and the UAE issued a joint statement calling on the separatists and government troops to halt all military actions in southern Yemen and prepare for “constructive dialogue.”

Reuters reported that the Jeddah talks had met a dead end. Sources interviewed by Al-Monitor had warned of a military escalation should the talks fail completely, but the joint statement seemed to have addressed those concerns.

“I think that the Saudi-led coalition has the ability to lead Jeddah talks into success,” Abdo said. “But the problem lies with one faction of the government, which is the #Islah party that rejects peaceful solutions.”

The dispute between the Islah Party, Yemen’s Muslim Brotherhood arm, and the separatists dates back to the 1994 civil war, when the latter accused the party of killing hundreds of their people.

Ahmed al-Maisari, the interior minister of the Saudi-backed government, reiterated his government’s refusal to sit with the separatists, describing them as tools.

In a Sept. 4 voice recording, Maisari said the Hadi government would rather talk with their main backer, the UAE. “If there is to be a dialogue, it will be with the UAE,” he said.

This caused Abdo to say, “The interior minister has already fled Aden and failed to stay on the ground because his project is not accepted in southern Yemen and has no public support here.”

After clashes erupted in Aden on Aug. 10, Maisari fled to Riyadh.

Following the indirect talks in Jeddah, Saudi Arabia expressed Sept. 5 its “complete rejection” of the Southern Transitional Council, calling on it to hand over control of military bases to Hadi’s government.

In a statement published by the Saudi official news agency SPA, the kingdom decried the separatists’ failure to adhere to its “previous call to cease the escalation and move toward dialogue.”

But Abdo said, “The Saudi-led coalition knows very well that the southerners are the only partners who achieved progress on the ground and liberated many areas in Yemen.” He said that “losing the southern people is not an easy choice for Saudi Arabia.”

It could be that even more violence awaits Yemen.

“Of course, the southern forces will defend their land and they are making the needed military preparations for that,” Abdo said. “And there will be more bloodshed.”

Like Abdo, Saleh Abo-Awdhal, chief editor of Alyoum8 newspaper, said Hadi’s government has chosen war over dialogue with its insistence on the withdrawal of separatists before any talks.

“If Hadi's government insists on another war, we may witness a wide and comprehensive death toll, in which the winner will be the terrorist organizations and the Houthi people,” Abo-Awdhal told Al-Monitor. He referred to Hadi's defeat of the separatists during the 1994 war between the south and north of Yemen after its unification in 1990.

The war “is what I expect to happen in light of the signs of division within [the Saudi-led coalition],” Abo-Awdhal said. “It's this division that forces one of the parties in the kingdom to support the Muslim Brotherhood movement [Islah Party].”