By cutting back its forces in Yemen, the UAE seeks to evade the material, humanitarian and moral consequences of the war all the while counting on its local agents to implement the UAE agenda in the country. 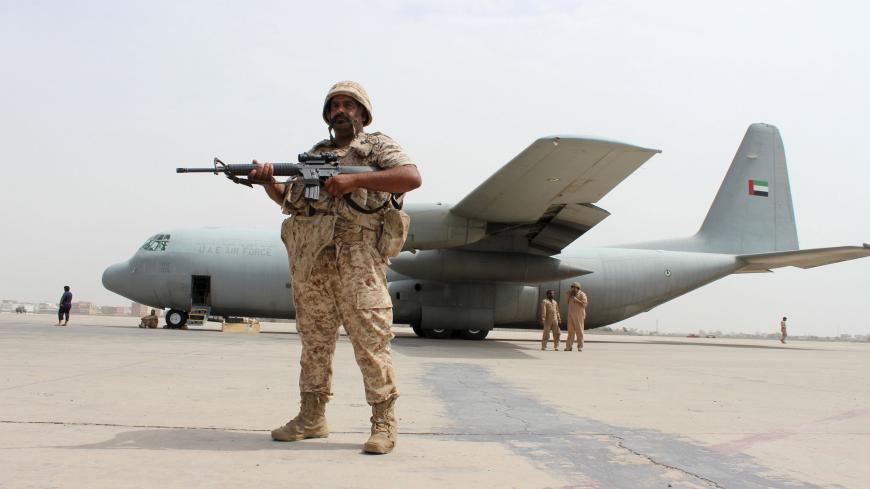 A soldier from the United Arab Emirates stands guard next to a UAE military plane in Aden, Yemen, Aug. 8, 2015. - REUTERS/Nasser Awad

BEIRUT — The United Arab Emirates is now implementing its plan to scale back troops in Yemen, a move it first announced June 28 as part of a strategic and tactical redeployment plan.

The UAE completely withdrew from Marib in northeastern Yemen July 4 and handed over Zuqar Island on the west coast to loyal Yemeni forces. Meanwhile, it cut back its forces in the port of Aden.

The UAE further placed its loyal Yemeni forces — around 90,000 troops — under unified command. On the western coastal front, the UAE placed forces under the unified command of Republican Guard commander Tariq Saleh, the son of late President Ali Abdullah Saleh's brother. In the south, the UAE placed Security Belt soldiers and military elites under the command of the Southern Transitional Council (STC).

Both the STC and the Republican Guard, which are supported by the UAE, do not recognize the legitimacy of President Abed Rabbo Mansour Hadi’s government.

The UAE intervened in Yemen as part of the Saudi-led coalition to restore the legitimate Yemeni government and end the Houthi coup, but it has worked on the ground to implement undeclared goals, most notably undermining the legitimate government by supporting the STC, among other military entities that look after UAE interests in Yemen. This helps the UAE portray itself to the world as an important regional player.

The UAE is also pursuing its own economic interests, the most important of which is disrupting Yemeni ports in order to revive its own ports.

Abu Dhabi’s efforts to unite its loyal factions and brigades aims to ensure its continued influence in Yemen, even after its troop drawdown. It also wants to pull the rug from under the legitimate government in the liberated areas to cater to its local agents, who, in turn, will implement the UAE agenda without the UAE assuming responsibility.

Meanwhile, many local forces will be positively affected by the Emirati decision. While the Houthis are undoubtedly the biggest winners, they are not the only ones.

At the local level, al-Islah Party (Yemen’s Muslim Brotherhood) will breathe a sigh of relief since the UAE has classified it as a terrorist group. Furthermore, Saudi Arabia's need for the party will grow, being the only card left to fight the Houthis in the north and the UAE-backed separatists in the south.

At the regional level, the UAE troop drawdown aims to dodge many material consequences, as well as human and moral responsibilities. This will improve its reputation regionally and internationally and leave Saudi Arabia to bear the consequences of the war before humanitarian organizations and the international community.

For Oman, the UAE withdrawal infers the removal of an opponent. This means that Oman only has Saudi Arabia to confront in the eastern province of Mahra. As Riyadh is still militarily present in Mahra, which Muscat deems as the only window to Yemen, Oman remains fully dependent on local Yemeni forces to reject the Saudi presence.

These UAE developments come in conjunction with the signing of a security agreement Aug. 1 between Abu Dhabi and Tehran, as well as a Houthi-Emirati rapprochement that led to direct meetings, Hezbollah's deputy secretary-general, Sheikh Naim Qassem, told al-Mayadeen July 22.

This is the first time a meeting has been announced between the two sides since the outbreak of the war in March 2015.

In this context, it is noteworthy that there is an understanding with Abu Dhabi not to escalate the situation in western Yemen through their local Yemeni allies. Otherwise, Houthis will have a strong response and will come after Abu Dhabi’s ports and airports. Abdul Ghani al-Zubeidi, editor of Houthi-affiliated al-Jaish magazine, revealed this to Al-Monitor in July.

The recent withdrawal from the northern areas is part of the implementation of these agreements.

As the Emiratis withdrew from Marib July 4, the Houthis targeted the house of provincial governor Sultan al-Arada with a ballistic missile. And when the UAE withdrew their forces from Aden Aug. 1, the Houthis targeted a military parade in Aden with a ballistic missile and a drone, killing 36 soldiers and the commander of the 1st Brigade in the Security Belt, Munir al-Yafei, known as Abu al-Yamamah.

In addition, an hour before the military parade incident, a car bomb exploded, targeting the building of police in Sheikh Othman in Aden, killing three people and injuring 30.

The UAE's goals in Yemen are different from Saudi Arabia’s. While the latter seeks to defeat the Houthis, or at least limit their influence on its southern border, the UAE is focusing on southern Yemen and the coastal strip, particularly the Bab el Mandeb Strait. It is therefore likely to operate in a pragmatic manner to ensure its survival, even as it withdraws from northern areas that Houthis deem to be under their influence.

“The UAE is not a casual actor in Yemen, and its withdrawal will not end its role,” Maged al-Madhaji, executive director of the Sanaa Center for Strategic Studies, told Al-Monitor. “Over the past five years, the UAE has established itself as a key regional player in Yemen, and its role has not been limited to direct military presence. This has led it to directly invest in many forces, including the STC, and in the west coast through the Republican Guard forces, the Tihamah Resistance forces and the Giants Brigades.”

He added, “This investment in forces that are at odds with the Houthis will ensure that Abu Dhabi remains at the heart of all changes in Yemen.”

UAE officials announced that their country will not withdraw from Yemen but is in the process of reducing and repositioning its forces, pointing out that the fight against terrorism is a priority.

Houthi leader Abdul Malik Badr al-Din al-Houthi responded to the withdrawal in a televised speech, “advising the UAE” to “be sincere and serious in announcing its withdrawal from Yemen for its own benefit, be it at the economic level or at several other levels.”

Houthi warned, “If the UAE continues its aggression and occupation of Yemen, this would pose a threat that only the UAE would be responsible for.”

There is no doubt that the Houthis, at least at this stage, are indifferent on controlling southern Yemen. They are trying their best to entrench their authority in the north before they tackle the south, unlike the UAE, which found that its temporary interests lie in the south.

This is why the UAE is supporting the southern separatists on the political, military and media levels, abandoning the goal behind its intervention in Yemen within the Arab coalition, which is restoring the legitimate government.