What is happening behind the scenes in the Yemen talks?

Saudi Arabia and the United Arab Emirates are trying to consolidate their military influence in Yemen through talks in Jeddah. 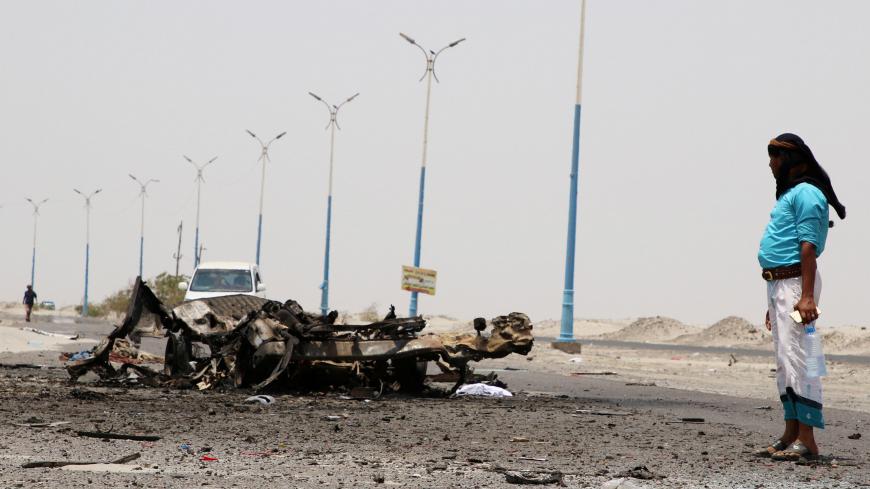 A man stands by the wreckage of government forces vehicles destroyed by UAE airstrikes near Aden, Yemen, Aug. 30, 2019. - REUTERS/Fawaz Salman

BEIRUT — The irony in the conflict raging in southern Yemen between the internationally recognized government and the Southern Transitional Council (STC) is that the United Arab Emirates (UAE) and Saudi Arabia — the coalition leading the battle against the Houthis — are both seen as parties to the war, be it directly or indirectly, and now they are sponsoring talks to end the violent power struggle in the country. Clashes between the STC and government troops began in August; the STC took control of Aden on Aug. 10

These talks came as Riyadh and Abu Dhabi shared influence in southern Yemen at the military level through their proxies fighting on the ground. This influence was further legitimized at the political level on the negotiating table that gathered the Yemeni parties in the Saudi city of Jeddah and kicked off Sept. 10.

As things stand now, it seems that Saudi Arabia and the UAE will be given further political legitimacy that would perpetuate their military influence in the country. Saudi Arabia is likely to support the legitimate government just for show, while the UAE would clearly back the STC.

The legitimate government rejected Aug. 10 any dialogue with the STC unless the latter pulled out from all camps and institutions that it took control of on Aug. 10, 2018.

The government demanded the talks be held with the UAE — which is directly responsible for the coalition in Yemen going off-track — as the UAE has been involved in supporting the separatists in southern Yemen. But the government had a change of heart and finally welcomed the dialogue.

In turn, the STC welcomed the Saudi-UAE joint statement calling for the talks and expressed its readiness to attend the Sept. 10 Jeddah conference without any preconditions.

The joint statement stressed the need “to halt all military activities, practices or violations against other components or public and private property.” It called for “taking serious action with the joint committee formed by Saudi Arabia and the UAE and the warring parties, to monitor the cessation of military activities and any other activities that would undermine public tranquility and stability and the need to stop the escalation in the media.”

STC spokesman Nazar Haitham told Al-Monitor that “the talks in Jeddah are ongoing and positive.” He explained that the “STC's main demand is to manage the south in such a way [as to] embody the true partnership with the Saudi-UAE coalition, until the end of Operation Decisive Storm.”

“[The] STC stands its grounds on the need to participate in the UN negotiating process as the main party representing the people in south Yemen,” Haitham added.

“The STC seeks through the Jeddah talks to find sustainable solutions so that peace would prevail and the aspirations of people would be met in the restoration of the full sovereignty of the south,” he said, concluding that “the current talks are ongoing without any Saudi-UAE pressure.”

These talks, however, remain ambiguous since the legitimate government has yet to announce the names of its representatives in the negotiations, and there has been no media statement about what is taking place in the political corridors. The STC, on the other hand, seems to be moving more at ease and with clear support from the UAE as it had explicitly declared the names of members of its delegation in the talks and gave comments to the media.

“So far, there is no breakthrough in the talks since the STC has imposed a high ceiling on its demands, while the government is also not offering many compromises,” the sources added, excepting the talks to falter.

The STC is seeking participation in the internationally recognized government by assuming positions in the local administrations located in the provinces under government control, such as Shabwa, Seiyun, Hadramut Valley and al-Ghaydah.

This clearly shows how the UAE and Saudi Arabia are sharing military influence in southern Yemen via their local proxies. Both countries seek through these talks to consolidate this influence politically by having the Yemeni parties sign an agreement to this effect.

The presidential office sources added that “there has been major Saudi pressure on the Riyadh-based government of Abed Rabbo Mansour Hadi. Meanwhile, the Yemeni military and security leadership on the ground refuse to give in to pressure or to make further concessions.”

In light of the foregoing, the STC is raising the bar so high on its demands that the government cannot meet them as it does not wish to make further concessions, especially after losing the capital, Sanaa, in September 2014 and now the temporary capital of Aden.

Two scenarios are likely to play out after the talks. First, perhaps there will be an agreement to allow the STC to formally exercise authority in the areas under its control, and the government would control Shabwa, Sayun, al-Mahra and Wadi Hadramaut.

The second scenario, which is closer to the current political reality, would be to involve the STC in the government at the expense of the Islah Party with senior positions such as the vice president, and entrust it with major ministries such as the interior in addition to managing the local authority in the governorates under its control.