Reports that Saudi Arabia is planning to militarize its presence in Yemen’s easternmost governorate have raised security concerns in neighboring Oman. 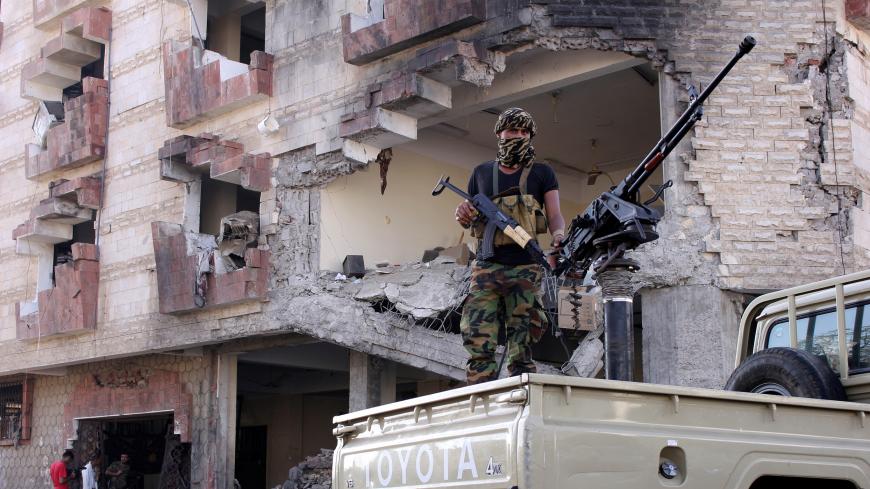 A police trooper mans a machine gun mounted on a patrol truck at the site of a car bomb attack outside the Finance Ministry offices in the southern port city of Aden, Yemen, Nov. 29, 2017. - REUTERS/Fawaz Salman

In recent days, much attention on southern Yemen has focused on Aden, where Yemen’s internationally recognized government has been clashing with the pro-independence Southern Resistance forces. That Saudi Arabia supports the former and the United Arab Emirates (UAE) the latter, such recent escalation of violence in the temporary capital for Abed Rabbo Mansour Hadi’s government has raised major questions about the Riyadh-led Arab coalition and Yemen’s ability to overcome its members’ political differences.

Developments in Yemen’s easternmost al-Mahra governorate, which also belonged to South Yemen during its official existence (1967-1990), are simultaneously heightening concerns about different Gulf Cooperation Council (GCC) states’ opposing interests undermining the prospects for conflict resolution in Yemen. Last year, the UAE formed the "Mahri Elite Forces," which took after the Emirati-backed elite forces in other Yemeni provinces including Abyan, Aden, Hadhramaut, Lahj and Shabwa. Abu Dhabi tasked the force with securing al-Mahra’s land and sea borders to take on arms smugglers. These forces were to take control of al-Mahra’s entry points, as well as the airport in al-Ghayda.

Certain tribal figures in al-Mahra objected to the UAE’s actions in the province, in no small part based on Abu Dhabi’s support for southern independence. Also, as al-Mahra has so far been spared the horrors of Yemen’s civil war and Salafist-jihadi terrorists have not spilled blood in the governorate, locals had concerns about the coalition’s growing involvement in al-Mahra dragging the peaceful province into the country’s war. Nevertheless, the UAE has not addressed such legitimate concerns on the part of local tribes in al-Mahra as the Emiratis continue advancing their agenda in the Yemeni governorate.

Thus when the Mahri Security Committee eventually agreed to the coalition’s actions in al-Mahra, the body did so with caveats, including that al-Ghayda airport not be transformed into a military base of the coalition; that the coalition’s actions in al-Mahra be done in coordination with local authorities; and that al-Mahra’s administrative, security and military team remain intact. Following a meeting in which these stipulations were agreed upon, locals praised the coalition-backed forces and vowed to work with them against entities engaged in arms smuggling while coordinating humanitarian aid and economic development. In December 2017, the coalition declared that al-Mahra’s airport became operational and started receiving inflows of humanitarian assistance.

Last month, Lebanese daily Al-Akhbar reported on stepped-up Saudi involvement in al-Mahra via the UAE. Signs of Saudi Arabia’s growing influence in al-Mahra came in late November when Hadi fired the province’s governor and appointed Rajeh Saidbakrit, who is close to Riyadh and has experience with anti-smuggling operations. Since then, Saudi Arabia has been continuing the Emirati Red Crescent’s work in al-Mahra by providing food, buses, ambulances, hygiene vehicles and street lights and paving roads through the King Salman Center for Relief and Humanitarian Action.

The Saudis are hoping to capitalize on their tribal connections in this part of Yemen, which the UAE lacks. Yet why is Saudi Arabia making such investments in providing aid and support for economic development in al-Mahra when many other governorates are grappling with a dire humanitarian disaster that has left millions on the brink of famine? The timing indicates that Abu Dhabi and Riyadh’s interests in al-Mahra do not pertain to Yemen’s humanitarian crisis.

The underlying reason may be Saudi Arabia’s aim to militarize their presence in al-Mahra. On Jan. 18, sources claimed that the Saudis deployed reinforcements to Nishtun port, situated within close proximity to the Omani-Yemeni border. Also, Riyadh recently announced its plans to open a Salafist missionary center in al-Mahra. Reportedly, Yemenis and non-Yemenis are buying real estate in al-Mahra at prices far above their value. Some are thought to be militant Sunni fundamentalists who fought in other parts of Yemen.

Oman, which wields significant influence in al-Mahra, negatively views the coalition’s deepening involvement in the Yemeni governorate where Muscat seeks to preserve the sectarian balance and the security landscape’s status quo. There is significant cross-border trade, giving Oman vested economic stakes in al-Mahra remaining peaceful and fortressing the sultanate from violence-plagued territory in Yemen and extremist forces. Undoubtedly, Oman has deep security, economic and cultural interests in keeping al-Mahra safe from Yemen’s conflict.

Omanis are sensitive about the future of al-Mahra. Due to historical factors, primarily the backing and strategic depth that South Yemen provided the Dhofar Rebellion in the 1960s and 1970s, Muscat understands the potential for changes in Yemen’s political framework, particularly in al-Mahra, to impact Oman’s internal security. There is a concern that the coalition’s stepped-up involvement in al-Mahra will result in the war spilling into eastern Yemen, making the Yemeni crisis an ever-graver threat to Oman and other GCC states’ security.

Although Qatar, not Oman, was the target of Saudi Arabia, the UAE and Bahrain’s unprecedented blockade last year, officials in Muscat have witnessed the Qatar crisis damage the GCC’s fabric and fear the ramifications for Oman’s national interests. What Muscat perceives as the coalition increasing pressure on Oman to act against alleged weapons smugglers on the sultanate’s soil comes at a time of growing insecurity in the Arabian Peninsula as the GCC has become an increasingly irrelevant subregional institution.

To be sure, differences between the GCC states were substantial long before the Qatar crisis. Yet prior to June 2017, the GCC members were largely able to settle their differences between closed doors and, at least to some extent, maintain a semblance of Gulf Arab unity while wars and chaotic unrest in other parts of the Arab world threatened the council members’ security.

Ultimately, the sultanate’s national security was one of the key reasons why Oman has been the sole GCC member that never participated in the coalition. Yet because of Oman’s fellow GCC members entering Yemen, Muscat sees itself paying a major price for, what Omanis view as, a misguided and immoral Saudi-led military campaign. Should al-Mahra get drawn into the violence of Yemen’s civil war, Oman will feel increasingly vulnerable to the crisis and likely grow increasingly frustrated with the sultanate’s two GCC neighbors.

Continuing to serve as an ally to all five other GCC states while deepening the sultanate’s relationship with Iran as al-Mahra possibly becomes more of a hotspot in the Yemeni crisis will prove challenging for Muscat’s foreign policy. Yet throughout history, Oman has successfully overcome such complicated regional circumstances.