Updated: US disputes UN report on capture of Al-Qaeda’s top man in Yemen

The report said Khalid Batarfi was handed over to Saudi authorities, yet a US officials says he's still at large. 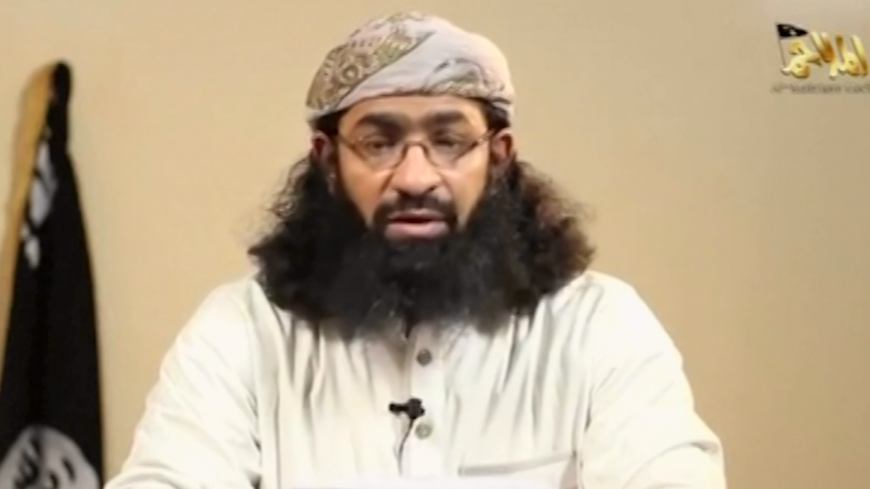 Al-Qaeda in the Arabian Peninsula leader Khalid Batarfi is seen in a screenshot taken from a 2015 video posted by Al-Malahem Media, the group's media arm. Batarfi, who had become the group's top leader a year ago, was captured in October, according to a UN report. - Al-Monitor screen capture

While a recent United Nations report claimed the head of al-Qaeda’s branch in Yemen, Khalid Batarfi, was captured in the country’s eastern Mahra governorate in October, a newly released video depicting Batarfi contradicts this account.

The operation was reported to have taken place in the town of al-Ghayda and led to the death of the local franchise’s second-in-command, Saad Atef al-Awlaqi.

The UN report did not say who conducted the operation. Although a spokesperson for US Central Command had initially credited Yemen’s armed forces with capturing Batarfi, one of the highest-ranking al-Qaeda officials, on Thursday a US official clarified to Al-Monitor that the military assesses Batarfi has not been captured at this time. The spokesperson at US Central Command apologized for the error.

The claim of the jihadi leader’s detention follows a series of heavy blows to al-Qaeda in the Arabian Peninsula in recent years. The group has suffered significant defections and dissension and has largely been driven out of al-Bayda governorate. Al-Khidr al-Walidi, the group’s top official in Abyan province, was killed in an operation in November, the UN report noted.

In October, SITE Intelligence Group, which uses open-source materials to monitor terrorism, cited unconfirmed reports of Batarfi’s capture by Yemeni security services. Last week, an obviously prerecorded video of Batarfi was released. His capture would be a likely intelligence windfall for the United States and its regional partners.

Batarfi, of Yemeni descent but born in Riyadh, was appointed to lead the terrorist group's Yemen branch in February 2020 after its prior leader Qassim al-Raimi was killed in a US airstrike. Raimi was reportedly the target of the failed 2017 Navy SEAL raid launched just days after Trump took office.

After Raimi's death, Elisabeth Kendall, a senior research fellow at Oxford University, wrote for the Washington Institute for Near East Policy that al-Qaeda in the Arabia Peninsula (AQAP) had weakened under his leadership and was “running out of high-caliber leaders and seasoned veterans of the 1990s Afghan jihad.”

Kendall told Al-Monitor by phone Friday, “AQAP has been very weak for well over a year now. They can’t trust each other. All they’re doing now is bringing out secondhand footage from ages ago.”

The group’s remnants appear to have gone even further underground after a US drone strike in May killed an al-Qaeda figure believed to have been the intermediary for the Pensacola Naval Air Station shooter, Kendall said. Raimi had claimed credit for directing a Saudi military student’s shooting spree that killed three US military personnel in December 2019 at the Florida base.

Little if anything has been publicly heard or seen from Raimi's successor, Batarfi, since last spring. In October, reports circulated of a firefight between security forces and al-Qaeda in al-Mahra, Yemen’s easternmost province.

Saudi forces work with local security in al-Mahra and maintain a base in the city of al-Ghayda.

Batarfi, who is believed to have trained in Afghanistan in 1999, led the group’s takeover of Yemen’s southern Abyan governorate in 2010 before being captured shortly thereafter. He and other senior al-Qaeda in the Arabian Peninsula leaders escaped the Central Prison in al-Mukallah in 2015.

He was designated a terrorist by the State Department in 2018. Following the release of the report, Al-Qaeda in the Arabian Peninsula released a video featuring Batarfi in which he comments on the Jan. 6 storming of the US Capitol — revealing that he was in fact not captured in Oct. 2020.

The administration of President Donald Trump continued to push weapons sales to Saudi Arabia and the United Arab Emirates in the Gulf coalition’s fight against Yemen’s Iran-linked Houthi rebels, even after Congress moved to block the transfers.

In 2018, the United States ended midair refueling for Gulf coalition aircraft as public opposition to the Saudi-led intervention grew, but limited intelligence and military targeting support out of al-Udeid Air Base in Qatar continued.

“The only activity that continued was side-by-side coaching to improve their air campaign by pushing for safeguards, like no-strike lists and intelligence focused on taking defensive actions,” said Michael Mulroy, a former US deputy assistant secretary of defense for the Middle East and an ABC News analyst.

“There needs to be a comprehensive international plan, preferably led by the United States, to support the United Nations in attaining a lasting peace agreement,” Mulroy said, adding, “Ending this support will not likely end this air campaign.”

Pentagon spokesperson John Kirby confirmed Feb. 5 that the United States had ceased intelligence support for the Saudi-led coalition’s operations in Yemen as a result of Biden’s order.

The UN has called Yemen’s civil war the world’s worst humanitarian catastrophe and has accused the Saudi-led coalition of potential war crimes for repeatedly targeting civilians. Saudi coalition airstrikes have continued to kill innocent people despite the US military advising.

The Biden administration last week froze proposed sales of advanced F-35 fighter jets and armed drones to the UAE, as well as a potential transfer of thousands of guided bombs to Saudi Arabia, pending review.

A former senior defense official who worked closely on operations in Yemen told Al-Monitor that officials in Riyadh “will likely reduce their cooperation with the US on counterterrorism” if the Biden administration blocks the sale of precision-guided munitions to the kingdom.

Al-Qaeda’s top leader, Ayman al-Zawahri, remains at large. No member state has confirmed reports of his death in October, the UN report read.

Editor’s note: Feb. 11, 2021. This article was updated to reflect that a US official stated that their earlier assessment that Batarfi had been captured was incorrect, as well as to note an AQAP video released after the report’s publication.