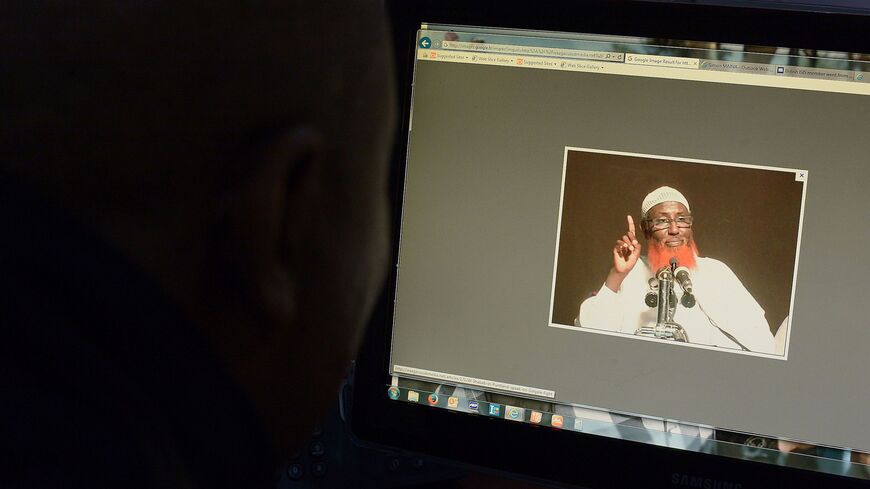 A man looks at a computer displaying the portrait of Somali-born cleric Abdulqadir Mumin, accused of heading the Islamic State group in East Africa and put on a US terror list in Nairobi on Sept. 1, 2016. - SIMON MAINA/AFP via Getty Images

Before his death in an overnight US special forces raid, Abu Ibrahim al-Hashimi al-Qurayshi was among one of the world’s most wanted terrorists. Al-Qurayshi took the helm of the Islamic State after Abu Bakr al-Baghadi died in a similar US operation in 2019.

In remarks on Thursday, President Joe Biden said al-Qurayshi’s death would sent a strong message to terrorists worldwide: “We will come after you and find you.” Here’s a look at several other Middle East terrorists who remain at large and whose whereabouts are sought by the United States.

Ayman al-Zawahiri is the current leader of al-Qaeda. Born into a prominent Egyptian family, al-Zawahiri merged his group, Egyptian Islamic Jihad, with al-Qaeda in 1998. He served as Osama bin Laden's personal physician and closest adviser until his death in 2011.

The US government accuses al-Zawahiri of plotting the USS Cole bombing in Yemen, which killed 17 US sailors in October 2000. He’s also believed to have helped coordinate the 9/11 attacks and was indicted in the United States for his role in the 1988 twin US embassy bombings that killed 224 people in Kenya and Tanzania. In September 2021, al-Zawahiri, who was rumored dead, appeared in a new video marking the 20th anniversary of 9/11. The US State Department has offered a $25 million reward for information on his location.

Abu Mohammed al-Golani heads Hayat Tahrir al-Sham, the US-designated terrorist group that controls much of Idlib province in northwest Syria. HTS emerged from al-Qaeda’s former affiliate in Syria known as al-Nusra Front and has undergone several rebrands. Golani formally broke ties with al-Qaeda in 2016 and in recent years, he has sought to portray HTS as a moderate Syrian opposition group fighting the government of President Bashar al-Assad.

Khalid al-Batarfi has been the emir of al-Qaeda in the Arabian Peninsula since February 2020, following the death of the Yemeni group’s former leader Qasim al-Rimi in a US airstrike. Al-Batarfi, who previously served as a religious judge and AQAP’s chief spokesperson, called for violence against Jews and the United States in a 2018 video. In February 2021, a United Nations report mistakenly claimed al-Batarfi was captured months earlier in Yemen’s eastern Mahra governorate.

Salim Jamil Ayyash is a former top Hezbollah operative who played a key role in the 2005 assassination of Lebanon’s former Prime Minister Rafik Hariri. According to the State Department, Ayyash was a senior figure in Unit 121, the group’s assassination squad that receives orders directly from Hezbollah chief Hassan Nasrallah. In 2020, an international tribunal convicted Ayyash in absentia of terrorism and homicide for his role in the truck bombing that killed Hariri and 21 others. The US government also says Ayyash has been involved in efforts to harm American military personnel.

Abd al-Rahman al-Maghrebi, also known as Muhammad Abbatay, is an al-Qaeda leader who the US government believes is based in Iran. The Moroccan-born terrorist is the son-in-law of al-Zawahiri. The State Department describes him as the longtime director of al-Qaeda’s media arm, al-Shahab.

Ibrahim al-Banna, also known as Abu Ayman al-Masri, is a senior AQAP leader and founding member of the terrorist group. According to the State Department, he has served as the group’s head of security and provided military and security guidance to AQAP’s leadership.