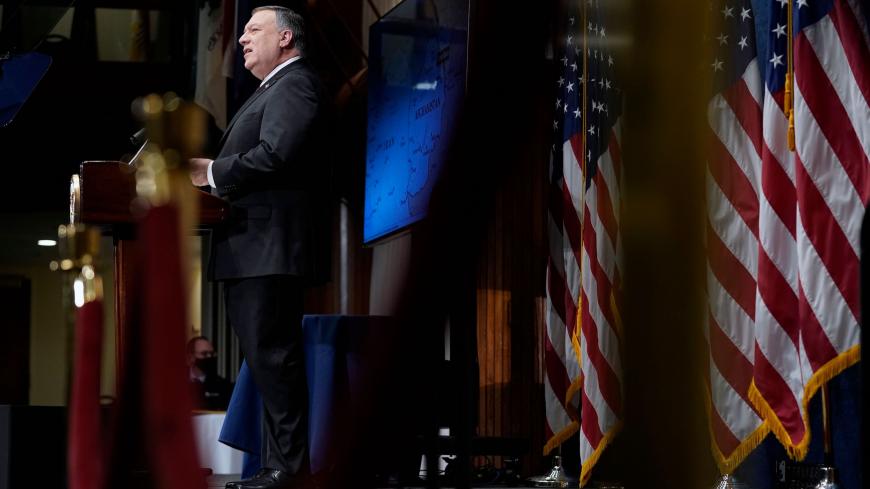 US Secretary of State Mike Pompeo tells the National Press Club in Washington, DC on Jan. 12, 2021, that Iran has become a new "home base" for al-Qaeda worse than Afghanistan, an assertion questioned by experts.. - ANDREW HARNIK/AFP via Getty Images

Iran has allowed al-Qaeda to set up its operational headquarters and fundraise from within Iranian territory, US Secretary of State Mike Pompeo announced Tuesday, a week before a new administration bent on reviving diplomacy with Tehran takes office.

“Al-Qaeda has a new home base. It is the Islamic Republic of Iran,” Pompeo said during a speech at the National Press Club in Washington. “Al-Qaeda today is operating under the hard shell of the Iranian regime’s protection.”

“A sea change was happening within the Iran-al-Qaeda axis,” Pompeo said, adding that deputies of the group’s current leader, Ayman al-Zawahiri, are now living inside Iran.

He accused the Iranian Ministry of Intelligence and Security and Iran’s Islamic Revolutionary Guard Corps of providing al-Qaeda with logistical support including travel documents, ID cards and passports. Tehran has also allowed the group to fundraise and freely communicate with other al-Qaeda members, Pompeo alleged.

“No one is fooled. All 9/11 terrorists came from @SecPompeo's favorite [Middle East] destinations; NONE from Iran,” Zarif tweeted on Tuesday.

Pompeo acknowledged there is no evidence that Iran helped plan or had advance knowledge of the 9/11 attacks, but noted that at least eight of the hijackers traveled through Iran between October 2000 and February 2001.

The relationship between Shiite-led Iran and the Sunni-dominated terrorist group was also documented by the Obama administration, which in 2011 accused Iran’s leaders of helping al-Qaeda move cash and recruits into neighboring Pakistan. In 2010, Army Gen. David Petraeus told Congress that the terrorist group was using Iran as a “key facilitation hub, where facilitators connect al-Qaeda’s senior leadership to regional affiliates."

Officials in the administration of President Donald Trump have previously called attention to Iran and al-Qaeda's ties, raising concerns the administration was building a case to go to war with Iran under the same authorization for use of military force that covered attacks on al-Qaeda and its associates after 9/11.

The State Department’s 2020 terrorism report, which was released to Congress in June, described Iranian authorities as “unwilling to bring to justice” senior members of al-Qaeda residing in the country or identify those it is holding in its custody. Osama bin Laden’s son Hamza bin Laden is thought to have lived in Iran before he was killed in a US operation in the Afghanistan-Pakistan border region in September 2019.

“This is not a love match,” said Barbara Slavin, director of the Future of Iran Initiative at the Atlantic Council. “It’s always been an uncomfortable relationship, one that has been extremely cynical and opportunistic on both sides.”

In November, The New York Times reported that Israeli agents in Tehran killed al-Qaeda’s second-in-command, Abdullah Ahmed Abdullah, at the request of Washington. Abdullah, also known as Abu Muhammad al-Masri, was wanted by the United States for his role in masterminding the Kenya and Tanzania embassy bombings, which killed 12 Americans in 1998.

Pompeo confirmed his death for the first time publicly on Tuesday, without specifying whether Israel was involved.

Pompeo’s renewed rhetoric on al-Qaeda and Iran is seen as another Trump administration effort to complicate President-elect Joe Biden’s pledge to reenter nuclear negotiations with Tehran. Biden has said the United States will rejoin the landmark agreement, from which Trump withdrew in 2018, if Iran returns to strict compliance under the deal.

On Tuesday the secretary of state unveiled sanctions on Muhammad Abbatay and Sultan Yusuf Hasan al-Arif, two al-Qaeda leaders who the United States believes are based in Iran. He also designated three leaders of the al-Qaeda Kurdish Battalions, a Salafi militant organization operating on the Iran-Iraq border.

The newest sanctions represent a final push from the outgoing Trump administration to punish Iran for its nuclear ambitions and destabilizing regional behavior. Earlier this week, Pompeo announced he would designate the Iran-aligned Houthi rebels in Yemen as a terrorist organization, a move aid groups warned will worsen the war-torn country’s already dire humanitarian crisis.

“What does Pompeo think he’s doing at this stage? The US has already sanctioned Iran up to the eyeballs,” Slavin said.

“This is a bargaining chip with the United States,” she said of Iran’s harboring al-Qaeda. “If the US were willing to lift sanctions on Iran and take Iran off the terrorist list and so on, Iran would drop al-Qaeda like a hot potato.”