Newly released correspondence from Osama bin Laden’s hideout in Pakistan contradicts U.S. assertions that al-Qaeda has a close relationship with Iran. Barbara Slavin on how being "the enemy of my enemy" doesn't necessarily make the two friends. 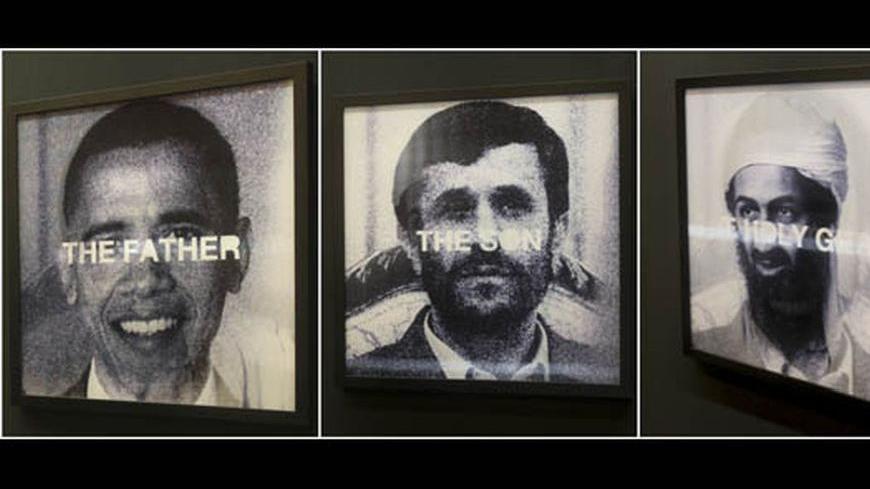 A combo of the installation titled Father, Son and The Holy Ghost, by Vivek "UBIK" Premachandran at "Relate to the Matter as I Drop the Bomb" exhibition in Dubai 18/05/2011. - REUTERS/Jumana El-Heloueh

According to a U.S. analysis of letters found in the Abbottabad compound when U.S. Special Forces killed bin Laden a year ago, “the relationship is not one of alliance, but of indirect and unpleasant negotiations over the release of detained jihadis and their families, including members of bin Laden’s family.”

The report by the Combating Terrorism Center (CTC) at West Point, released Thursday, goes on to say that Iran’s detention of some prominent al-Qaeda members who fled Afghanistan after 9-11 “seems to have sparked a campaign of threats, taking hostages and indirect negotiations …that have been drawn out for years and may still be ongoing.”

Iran and the group that became al-Qaeda have had some sort of ties for more than two decades, but the nature of the relationship has been subject to considerable speculation and hype. The newly released documents suggest that the two are largely antagonistic and underline the view that the George W. Bush administration missed what could have been a major opportunity to work with Iran against the Sunni militant group responsible for the 9-11 attacks.

The report also suggests that the Barack Obama administration may have overstated the case when the U.S. Treasury Department designated Iran last July 28 for having a “secret deal with al-Qaeda allowing it to funnel funds and operatives through its territory.”

Iran and al-Qaeda did establish a relationship in the 1990s in Sudan when Khartoum was a terrorist haven. According to the 9/11 Commission, the two reached an “informal agreement to cooperate in providing support — even if only training — for actions carried out primarily against Israel and the United States.”

Eight of the 10 Arab “muscle hijackers” who took part in the 9-11 attacks entered Afghanistan via Iran between October 2000 and February 2001 but the commission “found no evidence that Iran or Hezbollah was aware of the planning for what later became the 9/11 attack.”

However, after the attacks, Iran turned against al-Qaeda and detained hundreds of Arab fighters fleeing the U.S. war in Afghanistan. According to research I did for my book, Bitter Friends, Bosom Enemies, Iran extradited a number of these detainees to their home countries.

But Iran held on to high-profile detainees including several children of bin Laden and Saif al-Adel, then al-Qaeda’s number three, for insurance against al-Qaeda and as potential bargaining chips.

In 2003, after the U.S. invaded and occupied Iraq, Iran offered to trade these detainees to the United States for senior figures of the Mujahedin-e Khalq (MEK), an Iranian opposition group that at the time had more than 3,000 members at a base in Iraq called Camp Ashraf.

The Bush administration refused and then Deputy Secretary of State Richard Armitage told me that then Deputy Defense Secretary Paul Wolfowitz and his aide Douglas Feith wanted to hold onto MEK members as possible agents against Iran. (According to Seymour Hersh, some MEK members were later taken to the U.S. for training. Israel may have used MEK operatives to assassinate Iranian scientists.)

According to the CTC report, al Qaeda kept trying to get Iran to free the detainees who included a bin Laden son, Khalid, who was killed with him a year ago, and another son, Sa’ad, who died in 2009. A June 2009 letter addressed to “our venerable shaykh,” written by an al Qaeda official called “Atiyya,” says that the Iranians have released “a group of brothers” and that they are expected to free women and children related to bin Laden “perhaps within a week.”

Instead, Iran held onto the relatives. In March 2010, a teenage daughter of bin Laden, Iman, "escaped" to the Saudi embassy in Tehran and was allowed to return home. In return, Iran obtained the release of an Iranian diplomat kidnapped 15 months earlier in Pakistan by Sunni militants.

According to the CTC report, Atiyya bragged that al Qaeda abducted the Iranian  — Heshmatollah Attarzadeh-Niaki,  the commercial counselor in the Iranian Consulate in Peshawar —  and escalated other threats that “scared them [the Iranians] …based on what they saw [we are capable of], to be among the reasons that led them to expedite [the release of these prisoners].”

Still, Iran held onto other bin Laden relatives, including a daughter, Fatima.

The report says that al Qaeda fugitives fled to Iran after 9-11 because of links with an Afghan militant, Gulbuddin Hekmatyar, residing in Iran.  Al-Qaeda did not see Iran “from the perspective that ‘the enemy of my enemy is my friend,’ but the group might have hoped that ‘the enemy of my [American] enemy would leave me alone.”

Bruce Riedel, a CIA veteran and expert on both Iran and al-Qaeda says that since the CTC has made available only a tiny sample of the documentts, judgments should remain “tentative.” Still, the letters do “somewhat clarify” the Iran-al-Qaeda relationship.

“Rather than being secretly in bed with each other as some have argued, al Qaeda had a fairly hostile relationship with the Iranian regime,” Riedel said. “To get members of his family out of Iran, for example, bin Laden had an Iranian diplomat kidnapped and then traded. The Iranians released some of his family members in the deal but then double crossed al Qaeda by not letting one of his daughters, Fatima, free.”

Barbara Slavin is Washington correspondent for Al-Monitor and a senior fellow at The Atlantic Council where she focuses on Iran. She tweets at @BarbaraSlavin1.