Iran, Saudi Arabia in war of words over allegations of aiding al-Qaeda 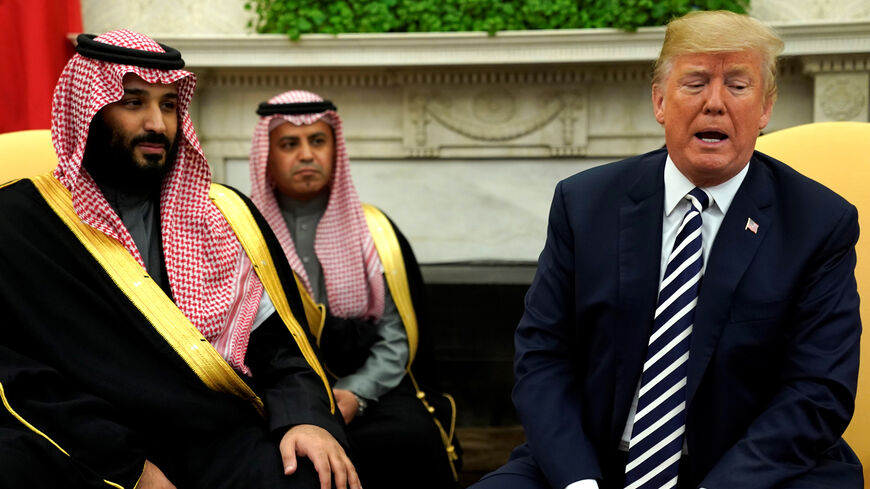 Saudi Arabian Crown Prince Mohammed bin Salman’s claim that Iran is hosting and supporting al-Qaeda leaders has been derided by Iranian officials as a “big lie.”

In a “60 Minutes” interview aired on CBS March 18, Prince Mohammed said, “Unfortunately, Iran is playing a harmful role. The Iranian regime is based on pure ideology. Many of the al-Qaeda operatives are protected in Iran, and it refuses to surrender them to justice and continues to refuse to extradite them to the United States. This includes the son of Osama bin Laden, the new leader of al-Qaeda. He lives in Iran and works out of Iran. He is supported by Iran.”

This is not the first time that Saudi Arabia has accused Iran of giving shelter to al-Qaeda leaders. In January 2017, Foreign Minister Adel al-Jubeir said at the World Economic Forum in Davos, Switzerland, “The virtual board of directors of al-Qaeda settled in Iran after the American invasion of Afghanistan. The order to blow up three housing compounds in Riyadh in 2003 was made by Saif al-Athel, the chief of operations for al-Qaeda, while he was in Iran in a phone call that we have on tape. The three leaders of the terrorist attack against Khobar Towers in 1996 fled to Iran and have been living there ever since.”

In response to Prince Mohammed’s claim, Iranian Foreign Ministry spokesman Bahram Qassemi issued a statement March 20 in which he strongly rejected the Saudi crown prince’s accusations. “Bin Salman’s claim about the presence of al-Qaeda leaders in Iran is a big lie. By spreading awkward lies, he can’t deny the role of the government and rulers of Saudi Arabia in creating the most dangerous terrorist groups of contemporary history and important terrorist occurrences such as 9/11,” hinting at the fact that 15 out of the 19 hijackers who perpetrated the attacks on Sept. 11, 2001, were Saudis.

Qassemi added, “In the first years of the United States of America’s attack on Afghanistan, and al-Qaeda’s forces’ [consequent] escape, and the presence of a number of them in the region and Saudi Arabia, some of them entered Iran illegally through some of the long land borders of Iran with Afghanistan, [and] they were arrested and handed over to their own countries based on their documents and nationality. [Among them] were a number of [members of slain al-Qaeda leader Osama] bin Laden’s family.”

Qassemi continued, “Due to [bin Laden’s family] having the documents and nationality of Saudi Arabia, we informed the Saudi government of this issue, and bin Laden’s daughter was handed over to Saudi Arabia’s embassy in Tehran after coordination with them. Saudi officials’ opinion was that other members of bin Laden’s family be expelled from the [same] border through which they had illegally entered Iran, and we did this based on their request.”

Mentioning the Saudi crown prince’s high-profile visit to the United States, Qassemi said, “In his trip to America, bin Salman is attempting to use every tool to pave his way to the throne, and apparently, hurling hundreds of billions of dollars [belonging to] the people of Saudi Arabia into the pockets of the American arms industry is not enough; it is also necessary [for Prince Mohammed] to think about a way to eliminate the proven record of current Saudi rulers’ support of terrorism and extremism. [However,] he showed in his recent interview that he is an amateur liar who even does not know the history and culture of his own country.”

The Iranian official then emphasized, “The creation of the al-Qaeda terrorist organization by the intelligence services of Saudi Arabia and their systematic relationship isn’t unknown to anyone. The released sections of the classified reports of the Americans about 9/11 indicates that these are unchangeable realities that show that many of the officials and figures who are currently holding various responsibilities in Saudi Arabia had a clear role in this event.”

Of note, the United States has also hinted at alleged Iranian support for al-Qaeda. In November 2017, the CIA released documents that were recovered from bin Laden’s compound in Pakistan. Based on these documents — some of which were pre-released to the anti-Iran Foundation for the Defense of Democracies (FDD) — it was claimed that Iran and al-Qaeda had “secret dealings,” charges that were later debunked.

While Saudi Arabia and the United States accuse Tehran of aiding al-Qaeda, Iranian officials have returned the charge, saying that Riyadh and Washington are behind the creation of terrorist groups in the Middle East. In this vein, Iranian Foreign Minister Mohammad Javad Zarif last November took a swipe at Saudi Arabia, tweeting, “A record low for the reach of petrodollars: CIA and FDD fake news w/ selective al-Qaeda docs re: Iran can't whitewash role of US allies in 9/11.”

Moreover, Hamid Baeedinejad, Iran’s ambassador to the UK, shared a video of former US Secretary of State Hillary Clinton lamenting the United States’ role in Afghanistan and Pakistan, saying Nov. 3, 2017, “To be fair, we had helped to create the problem we are now fighting." Clinton noted that after the Soviets left Afghanistan, the United States said "goodbye, leaving these trained people who were fanatical in Afghanistan and Pakistan."

Moreover, in a speech at the Islamic Unity conference in Tehran last December, President Hassan Rouhani hinted at blowback for the United States and Saudi Arabia, saying, “Everybody knows who created al-Qaeda. Everyone knows who brought terrorism in Afghanistan and the region to existence. Nonetheless, this snake, which was nurtured by them, bit them, too.”