Contrary to Trump administration assertions of Iranian support for al-Qaeda, relations between the two have historically been poor, a new report argues. 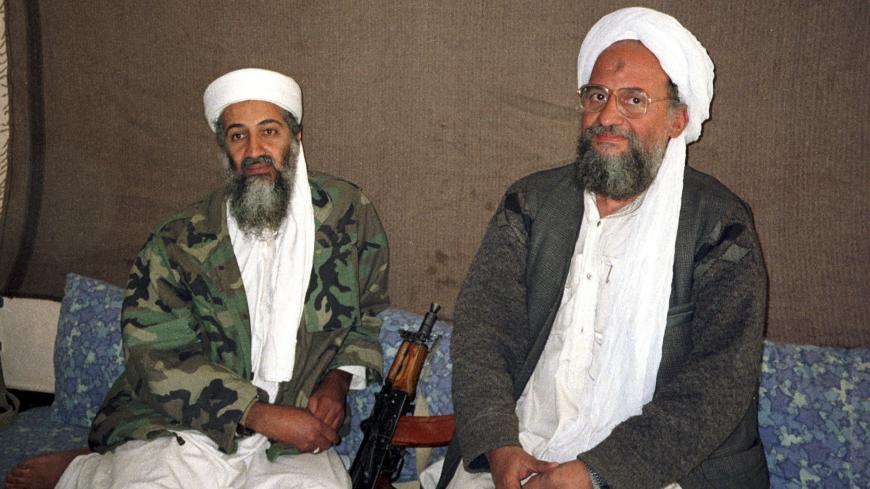 Osama bin Laden (L) sits with his adviser and purported successor Ayman al-Zawahri, an Egyptian linked to the al-Qaeda network, during an interview with Pakistani journalist Hamid Mir (not pictured) in an image supplied by the respected Dawn newspaper, Nov. 10, 2001. - REUTERS/Hamid Mir/Editor/Ausaf Newspaper for Daily Dawn

Iran and al-Qaeda had a largely hostile relationship and the Sunni jihadi group saw Shiite Iran as a “postponed enemy,” according to a new study of documents retrieved by US Special Forces during the raid on Osama bin Laden’s compound in Abbottabad, Pakistan, in 2011.

President Donald Trump and members of his administration have sought to justify a tough new policy toward Iran in part by asserting that al-Qaeda is among the “terrorist proxies” backed by the Islamic Republic.

However, according to the study, “no evidence of cooperation … on planning or carrying out terrorist attacks” between Iran and al-Qaeda has emerged and the relationship was one of expediency on al-Qaeda’s part and calculation on Iran’s.

Many of the conclusions in the new study echo previous findings from documents released in 2012 by the Combating Terrorism Center at the US Military Academy at West Point, which was given initial custody of the Abbottabad files. However, Nelly Lahoud, a senior fellow at the left-leaning New America think tank who previously served as a senior associate at the Combating Terrorism Center, has had access to additional information released by the Office of the Director of National Intelligence from 2015-2017 and nearly a half million other files made available by the CIA in 2017.

Lahoud, who spoke about the documents today at the New America offices in Washington, said the most fascinating findings came from the following documents: a 19-page letter written by a senior jihadi to al-Qaeda leaders in January 2007; a letter regarding an Iranian appeal to al-Qaeda in 2004 to contain anti-Shiite violence in Iraq; and a 220-page journal that appears to have been written by one of bin Laden’s daughters and that runs from March 2011 to May 1 — just hours before the compound was attacked and bin Laden killed.

The documents — which al-Qaeda never imagined would become public — reflect jihadis talking among themselves, Lahoud said, and thus may present a more accurate picture of the relationship than other commentaries by al-Qaeda, Iran or third parties.

The analyst divided al-Qaeda-Iran relations from 2001-2011 into three phases.

In late 2001-early 2002, after the United States invaded Afghanistan and toppled the Taliban regime, which had harbored al-Qaeda, hundreds of jihadis fled into Iran. Iran allowed them safe passage and — in collaboration with the Saudi Embassy in Tehran — deported many to their home countries in Saudi Arabia and Kuwait, Lahoud said. A condition was that the al-Qaeda members refrain from communicating with each other and attracting international attention — a condition they soon violated, she said.

In a second phase, from 2002 through March 2003, Iranian authorities arrested many of the jihadis but continued to deport most. Interestingly, this was a period in which US and Iranian diplomats met regularly in Geneva and Paris to discuss issues of mutual concern — including what to do about al-Qaeda members fleeing Afghanistan.

In a third phase, starting in March 2003 — as US forces invaded Iraq — Iran began holding al-Qaeda detainees, including members of bin Laden’s family, under a form of house arrest. The anonymous January 2007 letter, addressed to “our Sheikhs/leaders and those who support us,” says: "Iranian authorities decided to keep our brothers as a bargaining chip,” but does not specify for what purpose.

In the spring of 2003, Iran offered to trade senior al-Qaeda detainees for members of the Mujaheddin-e-Khalq (MEK), an anti-Tehran Iranian militant organization that had several thousand adherents at a camp in Iraq outside Baghdad. However, the George W. Bush administration rejected a swap of MEK leaders for the al-Qaeda detainees and instead gave them protection. Some in the Bush administration thought the group could be used for future attacks on Iran.

The 2007 letter refers to Iran as the “Iranian-Rafidi regime.” Rafidi means “rejectionist” and reflects the Sunni fundamentalist view that Shiite Muslims are not authentic Muslims because they have rejected those that Sunnis regard as true leaders of the faith.

The author explains that jihadis fled to Iran in late 2001-2002 out of “necessity” and sought to pass through the country or live there only temporarily. Some obtained visas and entered legally while others were smuggled in.

Concentrated in the western Iranian city of Zahedan, the jihadis did not observe radio silence as required but annoyed Iran by contacting Chechens and other like-minded militants, the author says.

Iran’s relationship with al-Qaeda became increasingly fraught as sectarian fighting spread in Iraq after the US invasion. Lahoud refers to a two-page letter in July 2004 between an intermediary for Iran and an al-Qaeda member that describes Iran’s concern over attacks on Shiite shrines in Iraq by al-Qaeda’s Iraqi affiliate and seeks bin Laden’s intercession. The intermediary is told that Iran must first release one of the detained members of bin Laden’s family.

That did not occur until 2010, when bin Laden’s wife, Umm Hamza, his son, Hamza, and Hamza's family were released. Other detainees were freed in 2009.

In return, Iran obtained the freedom of an Iranian commercial attache kidnapped earlier in Pakistan by al-Qaeda-affiliated militants.

The 220-page journal compiled in the last two months of bin Laden’s life has been inaccurately depicted as having been written by the al-Qaeda leader himself, Lahoud said. Instead, she believes it was written by a bin Laden daughter, Miriam. It deals extensively with bin Laden’s fascination with the events of the Arab Spring and brainstorming about how al-Qaeda could be a part of those movements. Here, references to Iran are “marginal,” Lahoud said, and only in regard to Bahrain, where the Saudis had intervened to crush protests by the small country’s Shiite majority.

“If Iran was collaborating” with al-Qaeda, bin Laden would "presumably propose some way to take advantage of the situation in countries undergoing Arab Spring protests and to agitate protests in Saudi Arabia,” Lahoud writes. Instead, bin Laden worries that Iran will try to mobilize Shiites in the region. “If Iran chooses to escalate, it can, for betrayal is intrinsic [to its politics], particularly because its regime espouses a militant revolutionary worldview,” bin Laden is quoted as saying in the journal.

His distrust of Iran went so far as to warn his wife, when she was freed from Iranian detention in 2010, to “leave behind everything … brought with her from Iran, including books and clothes and to replace everything the size of which could fit in the eye of a needle since tiny tracking devices have been developed and that could be injected into even a pill.”

Asked her reaction to the Trump administration’s attempts to assert substantial links between Iran and al-Qaeda, Lahoud said, “What they need is a dispassionate analysis of these documents. They [al-Qaeda] don’t like them [Iranians]. They have to deal with them.”