The continuing evolution of al-Qaeda 3.0

A revived al-Qaeda is effectively filling vacuums created by autocrats and failed reformist governments, who are planting the seeds for the next generation of recruits. 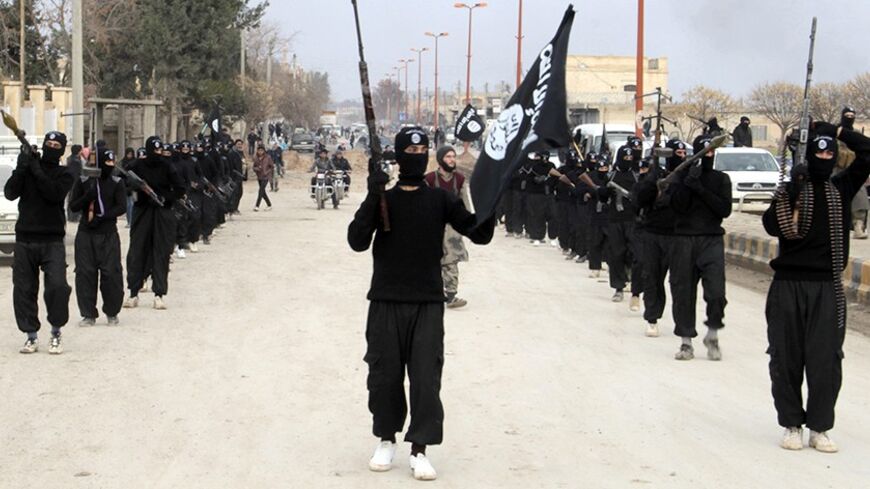 Al-Qaeda fighters linked to the Islamic State of Iraq and al-Sham (ISIS) carry their weapons during a parade in Tel Abyad, Syria, near the border with Turkey, Jan. 2, 2014. - REUTERS/Yaser Al-Khodor

Al-Qaeda the organization(s) and al-Qaedism the idea are thriving across the Arab world like never before due to the failure of the Arab Awakening to create competent reformist governments. The counterrevolution keeping old autocrats in power or putting new ones into power is already creating the next generation of al-Qaeda converts.

Less than three years ago, al-Qaeda, the organization and its ideology, was on its back foot. Osama bin Laden, its charismatic founder and leader, was killed in the Pakistani garrison city of Abbottabad. Many of his key lieutenants, including the Pakistani Ilyas Kashmiri and the Yemeni-American Anwar al-Awlaki, were hunted down and killed by drones. The al-Qaeda narrative that only violent jihad and terror can bring change to the Muslim world came under attack as dictators were toppled from Tunis to Cairo to Sanaa by mostly peaceful protest. The Muslim Brotherhood, al-Qaeda’s old adversary, seemed poised to dominate Arab politics and demonstrate that real change was possible without terror.

It was Awlaki who predicted al-Qaeda’s comeback. Writing in his English-language journal Inspire, Awlaki described the Arab Awakening as a “tsunami” of change that would inevitably benefit al-Qaeda. He said the hopes of reformists and democrats would be shattered against counter-revolutionary plots by reactionaries and that the breakdown of law and order would benefit the global jihad.

As 2014 begins, the picture is very different from 2011. Most dramatic has been the rise of al-Qaeda-affiliates in the Fertile Crescent, from Beirut to Baghdad. Al-Qaeda in Iraq, once wrongly proclaimed defeated by the surge, has revived and is more deadly than ever as the Islamic State of Iraq and al-Sham (ISIS). Today, it is fighting again to take control of the Anbar province. It successfully gave birth to a Syrian franchise, Jabhat al-Nusra, and now competes and collaborates with its own offspring for power in Syria. Together, ISIS and Jabhat al-Nusra are trying to destroy the century-old borders of the region, erasing the hated Sykes-Picot boundaries drawn by London and Paris in the aftermath of World War I. Thousands of jihadis from across the Muslim world, many of them from Europe, have flocked to Syria to join the fight against Bashar al-Assad’s regime. Sunni-Shiite sectarian violence is multiplying, feeding a fire that al-Qaeda has long stoked.

Al-Qaeda’s franchise in Lebanon, the Abdullah Azzam Brigades, is trying to import the Syrian civil war into the country. Named after the Palestinian ideologue and key bin Laden partner in Afghanistan in the 1980s, the brigades took credit for the attack on the Iranian Embassy in Beirut last November and have since been linked to other car bombings. The recent arrest in Lebanon of its leader, Majid bin Mohammad al-Majid, a Saudi, is not likely to put an end to its efforts. Of course, al-Qaeda is getting enormous assistance in spreading the civil war into Lebanon from Hezbollah’s blatant support of the Assad regime in Damascus and its own car bombings in Beirut.

The post–Arab Spring al-Qaeda, what I dubbed al-Qaeda 3.0 last year, has had its setbacks. A year ago this month, the French intervention in Mali broke up the largest al-Qaeda sanctuary ever. The fighters fled to new sanctuaries in Libya and Niger, and now multiple al-Qaeda franchises and sympathetic movements are thriving in the lawless Libyan desert. Al-Qaeda’s franchise in Yemen is still dangerous, regularly targeting the military and police across the country. The organization also maintains sleeper cells in Saudi Arabia and recruits Saudi dissidents to learn to fight jihad in Syria.

Al-Qaeda’s brightest prospects are probably in Egypt. The coup that restored military dictatorship in the Arab world’s most populous country has validated al-Qaeda’s ideology and narrative in the eyes of jihadists everywhere. The army is driving the extremists in the Muslim Brotherhood through al-Qaeda’s open door. Since the July 2013 coup, there have been 260 terror attacks in the Sinai Peninsula alone, according to one count, and more taking place in the cities of the Nile Valley every day. The country’s biggest terror group, Ansar Bayt al-Maqdisi, or Ansar Jerusalem, makes no secret of its support for Ayman al-Zawahri, bin Laden’s Egyptian successor.

The new year is likely to see a spike in jihadist violence across Egypt. Senior military figures will become targets for assassination, as will diplomats from Saudi Arabia and other Gulf states bankrolling the military government. Western embassies and institutions will also be targeted. Egypt's vital tourism industry will remain in the doldrums.

Its advances in Egypt, Iraq, Lebanon and Syria have moved al-Qaeda and its affiliates closer than ever to Israel in strength. It is no accident that the leader of Jabhat al-Nusra chose the nom de guerre Mohammad al-Golani. He wants to remind Syrians of their lost province and their ultimate enemy. Ansar Bayt al-Maqdisi's choice of names also makes a point, recalling Jerusalem as the ultimate target of jihadists everywhere. Israel remains a hard target for al-Qaeda, but its ambitions are abundantly clear.

Al-Qaeda 3.0 is more dispersed and decentralized than its predecessors. Its leaders, such as Golani and ISIS leader Muhammad al-Baghdadi, are more secretive and elusive figures than bin Laden, Zawahri and Abu Musab Zarqawi, the Jordanian who founded al-Qaeda in Iraq. They have kept their identities secret better than Awlaki or Kashmiri did, obviously to avoid death. Only on Dec. 25 of last year did the world see a photograph of Golani, or at least a man Iraqi intelligence says is Golani.

In the dismal refugee camps of Syrians in exile in Jordan and Turkey, in the wastelands of the slums of Cairo and Alexandria and across Arabia, the Arab Awakening has produced only frustration, humiliation and despair for far too many whose hopes were raised three years ago. The Arab Awakening is not over, and its final outcome is far from clear, but today the safest prediction is that the fourth generation of al-Qaeda is already forming in the refugee camps and slums across the Middle East.