With gains in Syria, Lebanon and Egypt, al-Qaeda and its affiliates threaten Israel more than ever. 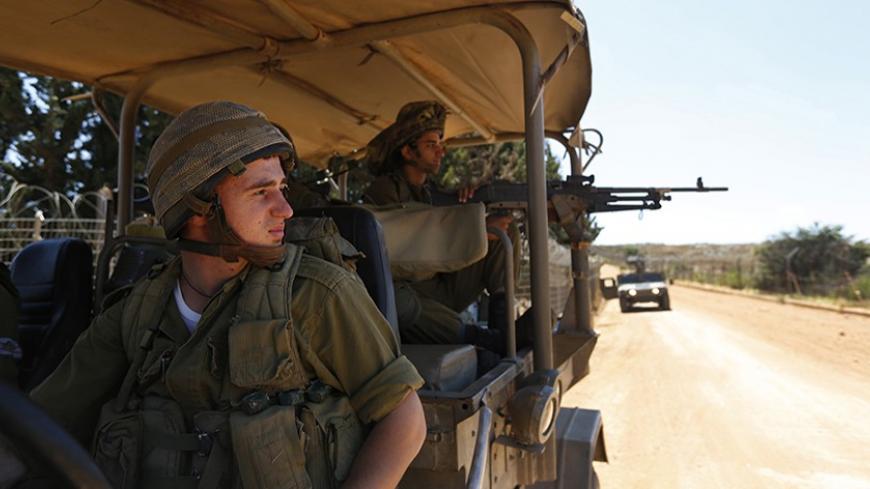 Israeli soldiers ride an army jeep during a patrol along Israel's border with Lebanon near the northern village of Avivim, July 3, 2013. - REUTERS/Baz Ratner

Al-Qaeda’s affiliates and al-Qaedism the idea are gradually, inexorably, surrounding Israel. Safe havens and bases are sprouting up north and south of Israel like never before in the history of the global jihad, fulfilling the dreams of Osama bin Laden and Ayman al-Zawahri. Israel remains a very hard target for terrorists and is fully capable of defending itself, but the challenges facing Israeli counter terrorists are becoming more difficult.

Israel has always been at the core of al-Qaeda’s narrative and ideology. From the beginning of bin Laden’s jihadist war on the ”Crusader-Zionist” enemy, Israel was a key target. The “liberation” of the holy mosques of Jerusalem actually came before the “liberation” of the holy mosques of Mecca and Medina in his writings. When he endorsed the attempt to blow up an American jetliner over Detroit on Christmas 2009, he said attacks like it would continue as long as America supported Israel. But until recently al-Qaeda and its affiliates found it hard to get to the promised land and attack Israel. Israeli and/or Jewish targets in Kenya or Tunisia or elsewhere were attacked, but Israel itself was too hard to get to.

Most of al-Qaeda’s activity until two years ago took place in parts of the Islamic world remote from the center of the Arab world and Israel. Al-Qaeda thrived in Pakistan, Yemen, Algeria and Iraq, but it had little presence in the Eastern Mediterranean.

The Arab Awakening has changed the geography of al-Qaedism dramatically. The Iraqi branch of al-Qaeda — the Islamic State of Iraq and al-Sham (ISIS) — gave birth to a Syrian branch, Jabhat al-Nusra, in 2012 that has thrived in the Syrian civil war. Now the two groups are competitors for influence in eastern and northern Syria. Israeli intelligence sources claim that they together command the loyalty of 40,000 fighters. An American intelligence source put the number at around 25,000. Many are foreigners drawn to Syria by the vision that they are part of a campaign to liberate Jerusalem after first defeating the Assad dictatorship. US officials estimate 7,000 foreign volunteers are in Syria from 50 countries. Even tiny Luxembourg has been identified as a country from which foreign volunteers have gone to fight and die in the Syrian jihad.

Jabhat al-Nusra has also created a Lebanese franchise, the Abdullah Azzam Brigades, named after the iconic Palestinian ideologue who was bin Laden’s partner in Afghanistan in the 1980s war against the Soviet Union. With Lebanon’s Sunni community frustrated by Hezbollah’s dominance of the country, the situation is ripe for al-Qaeda to grow. Zawahri in January urged all al-Qaeda affiliates in Syria and Iraq to work together to set the stage for the final liberation of Jerusalem. Zawahri has backed Jabhat al-Nusra’s leader, Mohammad al-Golani, as the rightful leader of the Syrian war; Golani’s nom de guerre itself tells you his ultimate objective is Israel.

In the south, al-Qaedism is growing in Egypt in the wake of the army coup last summer that toppled the democratically elected Muslim Brotherhood government. Zawahri had predicted from the start of the Arab Spring in Egypt that the army would stage a counterrevolution and he urged his sympathizers to prepare for an armed struggle, a jihad, to fight them. In the mind of al-Qaeda supporters, the coup validated their narrative: Peaceful, democratic change was an illusion, the Brotherhood was too weak and the army too determined to keep power. Al-Qaeda propaganda charges that the coup was arranged behind the scenes by the Saudi intelligence service with the silent blessing of Israel and the collusion of the Americans.

Now a number of groups have emerged in Egypt waging jihad on the military government. The most dangerous is Ansar Bayt al-Maqdis, or Ansar Jerusalem, which has carried out a series of terrorist attacks in Cairo and other Egyptian cities and also in the Sinai Peninsula. On Jan. 25, the group took responsibility with a video for shooting down an Egyptian military helicopter with a sophisticated man-portable surface-to-air missile. Analysis of the video suggests the MANPAD (Man-Portable Air Defense system) was more advanced than the usual state of the art in the region. Zawahri has more than once praised the jihadists in the Sinai Peninsula for their operations, especially against Israeli targets like the gas pipeline that delivers gas from Egypt to Israel and Jordan. The group's name betrays its ultimate objective.

Israeli intelligence announced last month that they had foiled an al-Qaeda plot to attack multiple targets inside Israel, including the US Embassy in Tel Aviv. The embassy is a vulnerable target since it sits on a major road with virtually no standoff from traffic. The Israeli internal intelligence service, the Shin Bet, reported it had arrested a number of Palestinians who were said to be in touch with Zawahri indirectly via jihadists in the Gaza Strip who were involved in planning the attacks. There may have also been contacts with Jabhat al-Nusra in Syria. The Israelis indicated that several Russian Muslims, probably from Chechnya, would participate in the actual suicide attacks. The operation appears to have been thwarted fairly early in its aspirational phase — that is, before the planning was complete and the operatives in place. If the accusation that Zawahri were directly involved in the planning was true, it would suggest a more active operational level of activity for the Egyptian head of al-Qaeda than is usually adduced.

The Israeli intelligence community would be especially alarmed if al-Qaeda could develop an infrastructure in Jordan. Then the noose would be complete. Jordanian intelligence is extremely effective in fighting al-Qaeda, but the group has a long history of recruiting in the Hashemite Kingdom. The founder of al-Qaeda in Iraq was, of course, the Jordanian Abu Musab Zarqawi. Jordanian sources say that some 2,500 Jordanians are fighting with the two al-Qaeda groups in Syria, Jabhat al-Nusra and the ISIS. Most are with Jabhat al-Nusra.

Israel has a long history of fighting terrorism and has exceptional capabilities to counter terror threats. It is a hard target with hard border security, including at airports and other entry posts. The Israeli intelligence and security services like the Shin Bet are among the best in the world. Al-Qaeda bases in Syria, Lebanon and Egypt are undoubtedly high on the collection priority lists of the Israeli security community.

The growth of al-Qaeda franchises and al-Qaedism in the neighborhood is the result of the Arab Awakening and the chaos it has produced, not some al-Qaeda master plan. Zawahri was caught off balance by the Egyptian revolution in 2011. But al-Qaeda is an adaptive ideology and it has taken advantage of the regional situation to fulfill the aspiration of its founders, bin Laden and Zawahri, to take the war to Israel’s border and someday into Israel itself.