Al-Qaeda chief Ayman al-Zawahri and Islamic State leader Abu Bakr al-Baghdadi are engaged in a battle for the hearts and minds of Islamic militants worldwide. 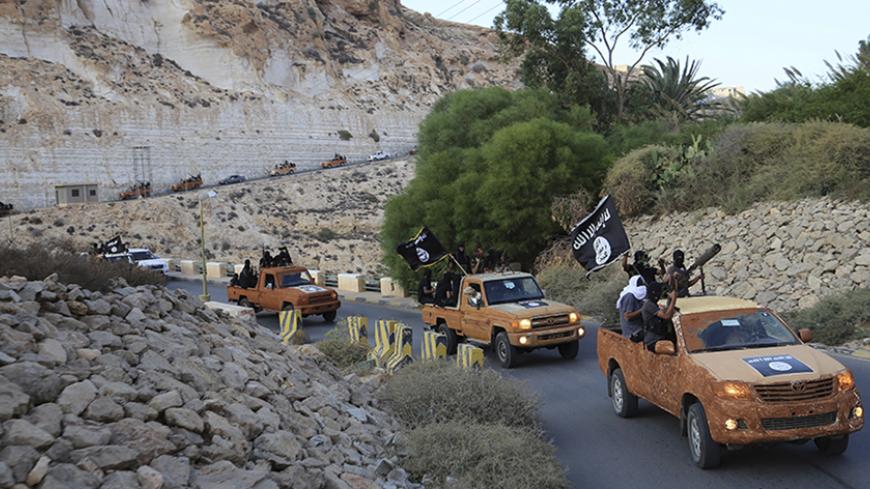 An armed motorcade belonging to members of Derna's Islamic Youth Council, consisting of former members of militias from the town of Derna, drive along a road in Derna, eastern Libya, Oct. 3, 2014. - REUTERS

Since the rise of the Islamic State (IS) this year and its proclamation of a caliphate, there has been a battle underway in the global jihad movement for leadership and loyalty between Caliph Ibrahim, also known as IS leader Abu Bakr al-Baghdadi, and al-Qaeda emir Ayman al-Zawahri. Baghdadi is making important gains while Zawahri is playing a long game.

It was inevitable that once Baghdadi asserted independence of Zawahri by operating in Syria and then proclaiming himself caliph that the two would be in competition for the allegiance of jihadist groups throughout the Islamic world. What is now increasingly clear is that Baghdadi has been taking the offensive in this battle and dispatching important emissaries secretly to coax support and pledges of loyalty from key targeted groups.

Baghdadi's biggest success came on Nov. 10, when the Egyptian group Ansar Bayt al-Maqdis (Defenders of Jerusalem) announced their allegiance to Baghdadi. The group was born in the wake of the Egyptian revolution and has carried out scores of attacks on Egyptian and Israeli targets in the Sinai Peninsula. It also operates in the cities of the Nile River, including Cairo.

Baghdadi reportedly sent Mohammed Haydar Zammar to persuade Ansar Bayt al-Maqdis to join the caliphate. Zammar is a legendary figure in jihadist circles. A native of Aleppo, he moved to Germany in 1982, where he ran a "travel agency" for aspiring terrorists. In 1996, Zammar traveled to Afghanistan to meet Osama bin Laden at bin Laden's request. He traveled several more times to Afghanistan before 9/11. He helped the famous Hamburg cell travel to Afghanistan to see bin Laden. The Hamburg cell included Mohamed Atta, Ziad Samir Jarrah and Marwan al-Shehhi, the 9/11 pilots who led the attacks and Ramzi Binalshibh, a key coordinator of the plot.

Zammar was "rendered" to Syria from Morocco after 9/11 in circumstances that are still unclear. He was sentenced to death by Bashar al-Assad's government and was incarcerated in Aleppo's central prison. As Al-Monitor reported in March, Zammar was exchanged in a prisoner swap for Syrian army officers by the rebels.

According to Der Spiegel's Nov. 18 report, "The Caliphate's Colonies," Zammar joined IS in its stronghold of Raqqa and Baghdadi dispatched him to recruit Ansar Bayt al-Maqdis for the caliphate. Zammar's credentials as a bin Laden protege with ties to the Hamburg cell undoubtedly helped his argument. Getting the jihadist Egyptians, of course, steals a march on Zawahri by taking away his fellow Egyptians at home. Zammar delivered a big prize.

Baghdadi has also gotten the loyalty of the Libyan city of Derna in Cyrenaica. Derna is a famous jihadist stronghold that has been a prime recruiting ground for terrorists for years. Baghdadi sent a senior Iraqi aide named Abu Nabil al Anbari to secure Derna's proclamation that it is now a province of the caliphate on the shore of the Mediterranean Sea.

An Algerian group called Soldiers of the Caliphate in Algeria joined IS in September and then executed French hostage Herve Gourdel in the Kabylie mountains to prove its loyalty. The group is led by a former leader of al-Qaeda in the Islamic Maghreb (AQIM) named Khaled Abu Suleiman. Other splinter elements of AQIM have joined him.

The big prize in Algeria is Mokhtar Belmokhtar, who carried out the attack on the In Amenas natural gas facility that killed 40 foreigners in January 2013. MBM is keeping his counsel so far and has not broken with Zawahri, but Baghdadi is surely seeking his allegiance.

In Pakistan, a splinter of the Taliban called Jundallah has announced its loyalty to IS. IS propaganda has appeared in Karachi and Kashmir. The most extreme Pakistani anti-Shiite sectarian group, Lashkar-e-Jhangvi, is reportedly in touch with IS through Lashkar-e-Jhangvi's cells in Saudi Arabia. If Lashkar-e-Jhangvi joined IS, it would be a big coup in Pakistan for Baghdadi in Zawahri's back yard.

Zawahri has yet to comment publicly on Baghdadi and his proclamation of the caliphate. Instead he has announced his own new al-Qaeda franchise for the Indian subcontinent. Zawahri has a long and ugly history with Baghdadi's predecessors in Iraq, especially with Abu Musab Zarqawi, the Jordanian who founded what is now IS. Zawahri has always been careful to try to keep his quarrels with Zarqawi and his disciples as private as possible. He probably expects that Baghdadi will not survive long, given the coalition against him led by the US Air Force, so there is no need to hurry and argue in public with a man whose life expectancy may be low.

Zawahri also still has the loyalty of much of the al-Qaeda team, especially al-Qaeda in the Arabian Peninsula and the Jabhat al-Nusra front in Syria. But Zawahri is an old man who has been on the run for decades. He should never be underestimated but he lacks Baghdadi's winning image. Baghdadi looks like a winner, which is always good for a competition.

Of course, one way to win a terrorist loyalty contest is to be the architect of an attack on the Crusader homeland. Nothing would cement Baghdadi's or Zawahri's credentials as the true heir to Sheikh Osama bin Laden than a spectacular attack in America.