Islamist rebel group Ahrar al-Sham has secured the release of 9/11 plotter and alleged al-Qaeda core member Mohammed Haydar Zammar, adding to concerns about the composition of the Islamic Front. 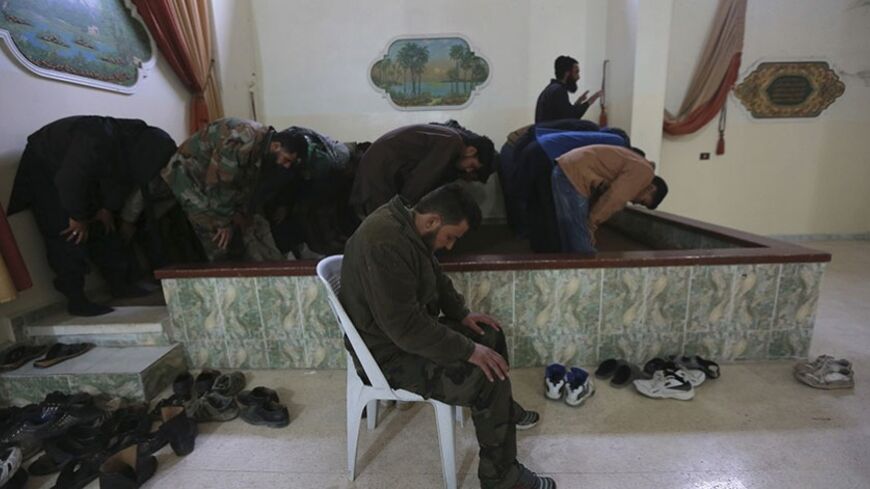 Ahrar al-Sham fighters pray inside their base in Arbeen, in the eastern Damascus suburb of Ghouta, March 6, 2014. - REUTERS/Bassam Khabieh
John Rosenthal
March 10, 2014

The al-Qaeda recruiter reputed to have assembled the so-called Hamburg Cell, which planned and largely carried out the 9/11 attacks on New York and Washington, has been set free in a prisoner exchange between rebel and regime forces in Syria.

A naturalized German citizen of Syrian origin, Mohammed Haydar Zammar left Germany shortly after the attacks and traveled to Morocco, where he was reportedly seized by the CIA and then “rendered” to Syria. According to local Syrian sources, his release and that of five other “political prisoners” was secured by the Syrian rebel group Ahrar al-Sham in exchange for the release of Syrian army officers. Zammar was serving a 12-year prison sentence in Aleppo’s central prison at the time.

Contacted by the German public broadcaster NDR and Die Süddeutsche Zeitung, family members still living in Germany have confirmed that Zammar was released in a prisoner exchange last fall. Reports published by local Syrian media in late September 2013 include Zammar’s name in a list of the “political prisoners” freed in exchange for the officers.

A native of Aleppo, Zammar moved to Germany with his family as a child and became a German citizen in 1982. By the late 1990s, he was running what the German media has ironically described as a “travel agency” in Hamburg, making arrangements for would-be jihadists to travel to al-Qaeda training camps in Afghanistan. According to a German intelligence report cited in the German press, in 1996 Zammar himself visited an al-Qaeda camp in Afghanistan on the personal invitation of Osama bin Laden. He is supposed to have made the trip many times thereafter.

To drum up enthusiasm for jihad back in Germany, Zammar is known to have distributed copies of bin Laden’s “declaration of war” on the United States in Hamburg mosques. In the February 1998 World Islamic Front Statement (the “Statement of Jihad against Jews and Crusaders”), bin Laden and the leaders of four prominent Islamist organizations declared that “to kill the Americans and their allies — civilians and military — is an individual duty for every Muslim who can do it in any country in which it is possible to do.” Bin Laden had already called for the expulsion of US troops from Saudi Arabia in a less broadly formulated fatwa in 1996.

In 2002, it was revealed that Zammar had been under close surveillance by German intelligence since 1997. Fragments of the surveillance that have filtered into the German press confirm his numerous contacts with the members of the Hamburg Cell. Presumably with the help of Zammar’s “travel agency,” the leading members of the cell — 9/11 hijackers Mohamed Atta, Ziad al-Jarrah and Marwan al-Shehhi, and plot coordinator Ramzi bin al-Shibh — would all travel to Afghanistan in late 1999. It was there that they would win the backing of the al-Qaeda leadership for their plot to attack the United States.

After being “rendered” to Syria, Zammar was reportedly held for four years without charge by Syrian military intelligence. According to information published by the Syrian Human Rights Committee, in 2006 he was brought to trial on charges of being a member of the Muslim Brotherhood. He would be sentenced to death the following year, though the sentence was immediately commuted to the 12-year prison sentence that he was serving at the time of his liberation from Aleppo’s central prison.

According to family members, Zammar has remained in Aleppo since his release. Syria’s second-largest city is divided into rebel- and regime-controlled areas and has been the site of savage fighting between the two sides. The central prison itself was the target of a rebel attack last month.

Following the 9/11 attacks, the German public prosecutor’s office is reported to have opened an investigation of Zammar on terrorism-related charges. In response to queries from NDR and Die Süddeutsche Zeitung, however, a spokesperson for the public prosecutor’s office said that the statute of limitations on the charges has run out, and hence that Zammar is free to return to Germany without fear of being arrested.

Ahrar al-Sham, the Syrian rebel group that secured Zammar’s release, is a powerful component of the so-called Islamic Front, a coalition of rebel groups in northern Syria that has famously been involved in confrontations with the Islamic State of Iraq and al-Sham (ISIS). ISIS grew out of the Islamic State of Iraq (Al-Qaeda in Iraq), the one-time al-Qaeda affiliate that was founded by the late Abu Musab Zarqawi.

Despite cooperating with al-Qaeda-affiliated Jabhat al-Nusra and known connections to the al-Qaeda core of Ayman al-Zawahri, Ahrar al-Sham and the Islamic Front have been touted by some Western policymakers and commentators as a more “moderate” Islamist alternative to ISIS. The priority accorded by Ahrar al-Sham to liberating the al-Qaeda operative Zammar should provide additional cause to wonder about the wisdom of this assessment.