‘A slap in the face’: 9/11 families say US-Sudan deal would torpedo two-decade lawsuit

The Trump administration has quietly reached an understanding with Sudan that some 9/11 families say puts Washington’s foreign policy objectives ahead of their quest for justice. 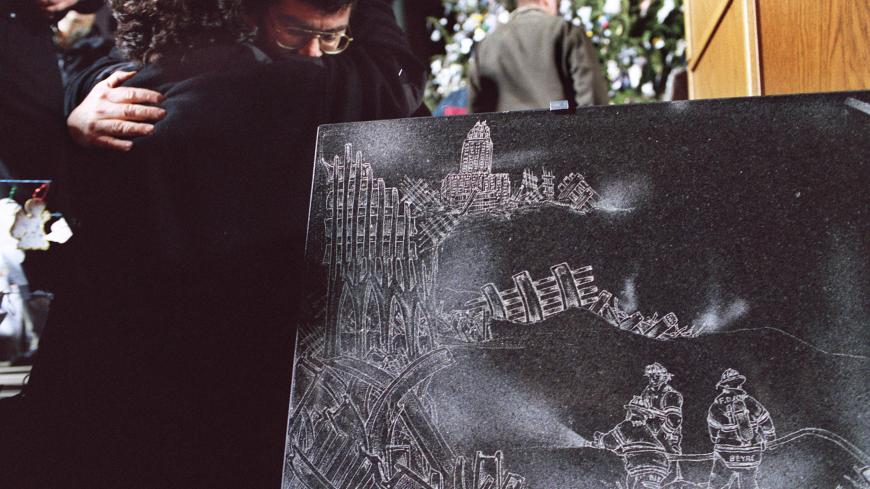 Nearly two decades after 9/11, some victims’ relatives are worried that a Trump administration deal to take Sudan off the US state sponsors of terror list and grant its government immunity from prosecution could jeopardize their own lawsuits accusing Khartoum of abetting al-Qaeda in the attack.

Angela Mistrulli, whose father died in the World Trade Center’s north tower, called the State Department in May after she heard news of the potential delisting. She said officials claimed they were unaware the 9/11 families had active claims against Sudan.

“At first, they were very like, ‘You guys have nothing,’” recalled Mistrulli. “It was a slap in the face from my own country.”

“It was absolutely shocking to me because we had been pursuing Sudan in court since 2003,” she told Al-Monitor.

In exchange for taking Sudan off the terror list — where it has sat since 1993 and remains alongside Iran, North Korea, and Syria — the State Department is requiring that Khartoum pay $335 million toward a court settlement reached in May with the victims of al-Qaeda’s embassy bombings in Kenya and Tanzania in 1998.

As part of the understanding, the State Department also negotiated an out-of-court settlement for the victims of the terror attack on the destroyer USS Cole in 2000. The agreement does not include compensation for 9/11 victims’ families.

Under the deal, the State Department has asked Congress to pass legislation restoring what is known as Sudan’s sovereign immunity. The families say this would in effect wipe out their lawsuits already filed under the Foreign Sovereign Immunity Act, the same statute the Cole and Embassy families relied on to sue Sudan.

“When we first reached out to the State Department, they acted incredulous,” said Kristen Breitweiser, whose husband died in the 9/11 attacks and now lobbies Washington on behalf of victims. She, too, said officials told her they weren’t aware of their lawsuits.

But Sean Carter, one of the lead attorneys representing 9/11 families, told Al-Monitor that his office had been in contact with the US State Department over the litigation for years. In February, he sent a letter to US Special Envoy to Sudan Don Booth, reminding Booth that his clients had “active and unsatisfied claims” against the Sudanese government.

The State Department declined to comment on conversations with the families, but a spokesperson told Al-Monitor that Sudan’s potential delisting and “ensuring that 9/11 victims have the opportunity to pursue claims against Sudan” are not “mutually exclusive.”

Officials at the department told families they could pursue their claims against Sudan under a different legal statute: the Justice Against Sponsors of Terrorism Act (JASTA), which allows Americans to sue foreign countries that aren’t designated state sponsors of terror.

“Our response [was] if JASTA is such a viable remedy, then why is that not being pursued by the other victims' groups?” Mistrulli said. “There is no reason that we should have to modify our current claims and pursue them under a novel law that has never been proven in court.”

To the 9/11 advocates who spoke with Al-Monitor, it seems as if the State Department is taking Sudan’s side over theirs. During a July phone call, Mistrulli, Breitweiser and two other victims’ relatives recall Booth telling them that if their activism were to derail Sudan’s delisting, they would be considered responsible for potential terror attacks that came as a result.

“It was very hurtful,” said Mistrulli. “It made me feel as though there was not a United States of America desk at the State Department.”

Sudan is in the midst of a fragile transition to democracy, which proponents of the deal say offers the United States an opportunity to end Sudan’s international pariah status and ease the heavily indebted country’s access to foreign aid and investment.

After harboring Osama bin Laden for five years, Bashir’s government expelled him from the country and seized most of his local assets under US pressure by 1996, the 9/11 Commission report found.

“Sudan’s position on all of this is you can’t fault Sudan for what Osama bin Laden did years after he was kicked out of Sudan, any more than you could fault the US government for Timothy McVeigh’s bombing in Oklahoma City,” said Christopher Curran, Sudan’s legal counsel in the matter.

The Sudanese Embassy in Washington did not return Al-Monitor’s request for comment.

After Sudan failed to show up in court for nearly two decades, its lawyers in February filed a motion to dismiss the 9/11 litigation as based on “vague and conclusory” allegations. The lawyers also argue that the plaintiffs have not presented evidence demonstrating the participants in the 9/11 attacks had entered Sudan at all.

But the 9/11 victims argue that al-Qaeda would not have been able to pull off such a large-scale terrorist attack had Sudan not first provided the group with safe haven, as well as other forms of financial and material support in the early 1990s.

Al-Qaeda conducted the Cole, embassy and 9/11 attacks after bin Laden had been expelled from Sudan. The 9/11 families see little difference between their argument for Sudan’s alleged connection and the arguments put forth in the other cases.

“It is the same network,” Mistrulli said of the terrorists who planned all three attacks. “[Sudan] is where al-Qaeda is bred. That is where the training camps, the financing began.”

Carter said the 9/11 families are optimistic more documentary and testimonial evidence will emerge in court. They intend to seek the deposition of Bashir, who is currently in the custody of Sudan’s new government.

The litigation remains pending in the Southern District of New York.

Meanwhile, Mistrulli and others have the backing of at least two senior members of Congress, including Sens. Bob Menendez, D-N.J., and Chuck Schumer, D-N.Y., who have argued the proposed legislation to immunize Sudan does not adequately protect the 9/11 families’ rights.

Menendez, the ranking Democrat on the Senate Foreign Relations Committee, also took aim at the State Department last month for asking Congress to vote to implement the Trump administration’s agreement with Sudan, which, as of this writing, his office says hasn't been shared with him.

The proposal originally drafted by Sen. Chris Coons, D-Del., is now being renegotiated, including “how the Congress will resolve the issue of the 9/11 claims,” a congressional aide told Al-Monitor.

The 9/11 victims are hopeful the delay will give them further opportunity to make their case to lawmakers.

“We want accountability and we want justice,” said Breitweiser. “Right now, we have neither.”