The last major step in restoring US-Sudanese relations is legislation pending in Congress that would restore Sudan's sovereign immunity. 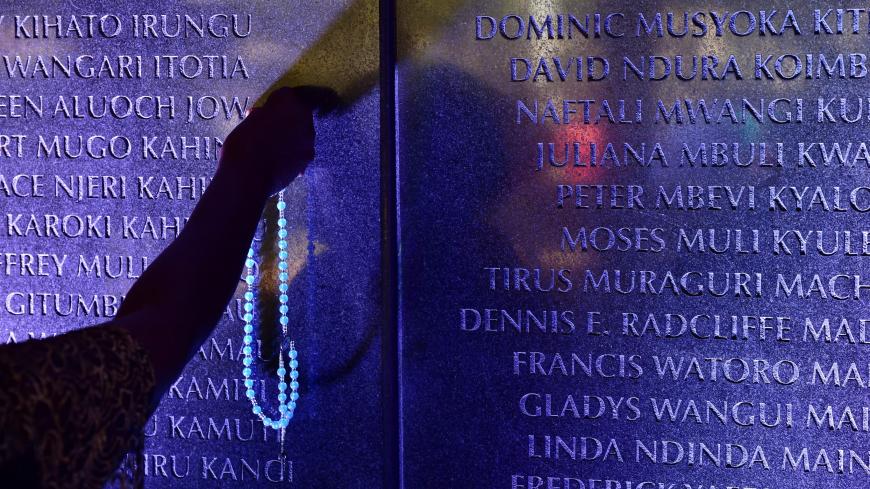 Margaret Achieng, 80, holds her rosary on Aug. 7, 2018, to the name of her daughter Doreen on the plaque bearing the names of those killed in the 1998 bombing of the US Embassy, in Nairobi during a ceremony held to mark the 20th anniversary of attacks on US embassies in Nairobi and Dar es-Salaam, Tanzania. - TONY KARUMBA/AFP via Getty Images

Sudanese and US officials signed a long-awaited claims agreement in Washington on Friday involving Sudan's settlement payment for the victims of al-Qaeda’s 1998 Kenya and Tanzania embassy bombings.

The deal formalizes an understanding reached earlier this year between the two governments in which the Trump administration has removed Sudan from the US state sponsors of terrorism list and Sudan’s sovereign immunity will be restored via an act of Congress in exchange for Sudan paying $335 million toward a court settlement for 1998 terror attacks.

Last week, the Trump administration also extracted an additional last-minute concession from Sudan’s leaders — that they take steps to recognize Israel amid a White House push dubbed the Abraham Accords.

The State Department’s top official for African Affairs, Tibor Nagy, was present for the finalization of the claims agreement Friday. The Sudanese side was led by Ambassador Mohammad Abdallah al-Tum.

Why it matters: The delisting process is set to ease the severely indebted country’s access to international development and investment, but it comes with a price, both for Sudan’s interim rulers and American citizens.

Senior White House officials' push to convince Sudan’s interim leaders to recognize Israel was carried out while minimizing the involvement of State Department officials responsible for African affairs, leading to concerns among some in Washington that the White House was prioritizing a preelection political win over the stability of a promising new African democracy.

Moreover, the restoration of Sudan’s sovereign immunity — while desperately needed by Khartoum — is bad news for family members of victims of the Sept. 11, 2001 attacks, who have ongoing litigation over what they allege is Sudan’s complicity in the attacks due to support for al-Qaeda in the 1990s by President Omar al-Bashir's government. Bashir was ousted from power last year.

Families of victims of the 1998 bombings have already won a settlement in court, while relatives of the 2000 USS Cole bombing in Yemen received payments negotiated by the US State Department out of court.

What’s next: Sudan’s relations with the United States will be fully restored once the “legal peace” legislation passes Congress. But Democratic Sens. Bob Menendez of New Jersey and Chuck Schumer of New York opposed a previous proposal on grounds that it does not sufficiently protect the 9/11 victims’ families’ lawsuits.

Know more: Read how the Trump administration nearly upended the delicate rescission process in September by making preparations to prematurely delist Sudan. And Rina Bassist shows how the ostensible political win for Israeli Prime Minister Benjamin Netanyahu is being overshadowed by problems at home.