US to remove Sudan from state sponsors of terror list 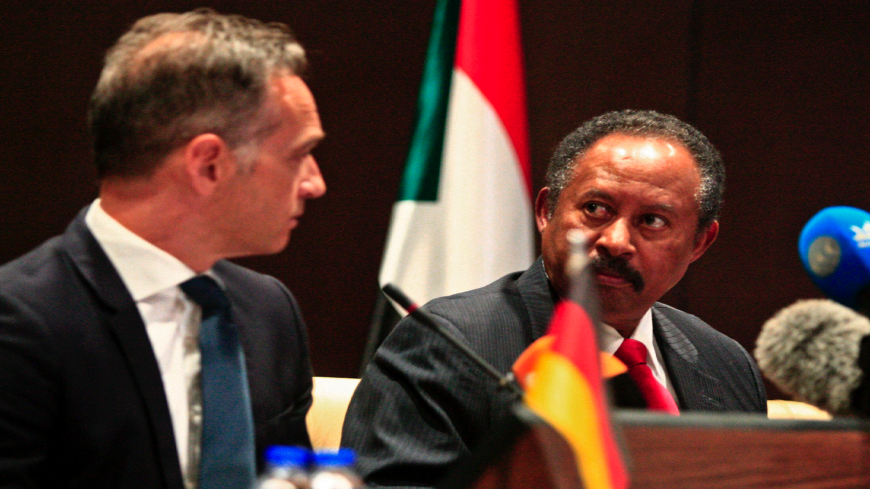 German Foreign Minister Heiko Maas (L) and Sudan's interim Prime Minister Abdallah Hamdok give a joint press conference in the Sudanese capital, Khartoum, on Sept. 3, 2019. Hamdok called for the United States to drop his country from its state sponsors of terrorism list, insisting it was crucial to economic revival. - EBRAHIM HAMID/AFP via Getty Images

The Donald Trump administration will remove Sudan from the US state sponsors of terror list once Sudan’s government transfers into escrow $335 million in settlement money for families of victims of the 1998 embassy bombings in Kenya and Tanzania, Trump announced Monday.

The decision to remove Sudan from the list will ease the impoverished country’s access to international investment and aid more than a year after popular protests ousted long-time dictator Omar al-Bashir and nearly two decades since Sudanese officials began cooperating with the United States on counterterrorism efforts.

As part of negotiations over the de-listing, Sudanese officials are expected to take preliminary steps toward recognizing Israel over the next several days, according to two sources familiar with the discussions who spoke to Al-Monitor on the condition of anonymity. The Sudanese Embassy in Washington did not immediately return Al-Monitor’s request for comment.

Earlier this year, Trump administration officials reached a preliminary agreement with Sudan’s new civilian-led transitional government in which Khartoum would transfer over the settlement money in exchange for Congress passing legislation that would grant Sudan immunity from liability for other terrorist attacks.

Sudan also agreed to pay an out-of-court settlement for victims of al-Qaeda’s 2000 attack on the USS Cole. The prior Sudanese regime harbored Osama bin Laden and other international terrorists, including Abu Nidal and Carlos the Jackal, in the 1990s.

Last month the Trump administration added an additional request amid its negotiations with Sudan’s interim leaders. During a visit to Sudan’s capital, Secretary of State Mike Pompeo asked Sudanese Prime Minister Abdallah Hamdok if his government would recognize Israel, raising concerns among observers that the White House was attempting to move the goal posts on de-listing Khartoum.

Al-Monitor exclusively reported that a rescission packet for Sudan was sent to the White House prior to Pompeo’s trip to Khartoum.

Sudanese officials did not outright reject Pompeo’s proposal, sources closely familiar with the discussions told Al-Monitor at the time, but the rescission packet was left unsigned.

The White House’s push raised concerns among some experts that Sudan’s unelected government may face domestic backlash if it agreed to recognize Israel.

Negotiations hit a snag last month in the United Arab Emirates when a delegation of US officials led by the National Security Council’s director for Gulf Affairs Brig. Gen. Miguel Correa remained noncommittal amid a Sudanese request for billions of dollars in desperately needed economic relief.

The talks then gained momentum again over the weekend when Sudan’s Prime Minister Abdallah Hamdok received assurances from senior US officials of economic and debt relief incentives, as well as a renewed push to convince Congress to pass legislation restoring Sudan’s immunity, according to two people familiar with the matter.

Once the settlement money is put into escrow in the United States, the White House will formally notify Congress of the decision to de-list Sudan. Lawmakers will have 45 days to veto the rescission.

Congress missed a rare opportunity at the end of September to advance the immunization proposal, which has since undergone renegotiation with the administration. A congressional aide told Al-Monitor on Friday that negotiations over the legislation are “alive and ongoing.”

But Menendez is reportedly doubling down on his opposition to any legislation that does not include adequate protections for pending lawsuits filed by the families of 9/11 victims against Sudan’s government for its past support for bin Laden and al-Qaeda.

Nonetheless, lawmakers are unlikely to have the supermajority needed to override the president if he chooses to veto a potential rejection by Congress of Sudan’s de-listing.

If Sudanese officials go through with recognizing Israel, it will be another major transition for the country.

Sudan’s role among regional states opposed to peace with Israel was solidified in 1967 when Arab leaders agreed during a summit in Khartoum on the three “noes:” no peace with Israel, no negotiations and no recognition of Israel, as well as taking a stance in support of Palestinian national rights.

So far, the United Arab Emirates and Bahrain have formally normalized ties with the Jewish state as part of a pre-2020 presidential election initiative the Trump administration has dubbed the Abraham Accords.