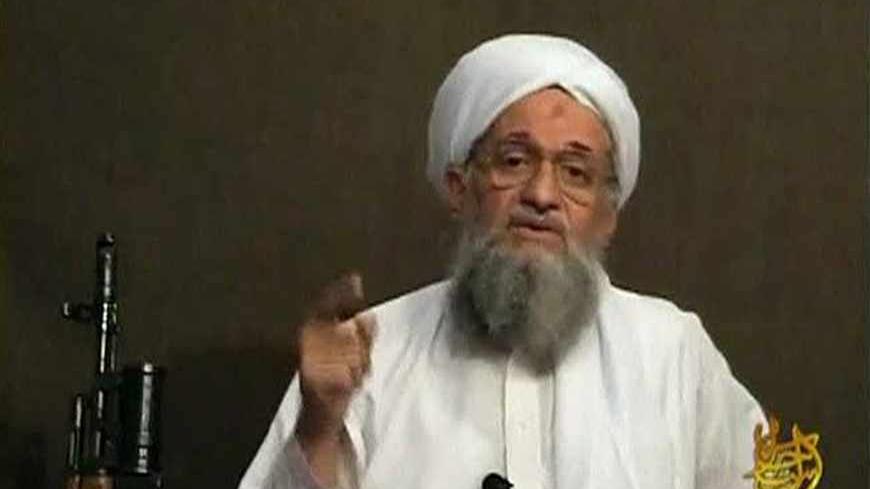 The audio recording aired by Al Jazeera on Oct. 8  of al-Qaeda leader Ayman al-Zawahri has caused quite a stir, in particular because Zawahri called for disbanding the Islamic State of Iraq and al-Sham (ISIS). Zawahri also confirmed that Jabhat al-Nusra was the organization's branch is Syria, giving it the cloak of legitimacy. Meanwhile, ISIS leader Abu Bakr al-Baghdadi responded by rejecting Zawahri's call, stressing that ISIS will remain in Iraq and in Syria.

In the recording, Zawahri stated, "The Islamic State of Iraq and al-Sham is canceled, and work continues under the name of the Islamic State of Iraq (ISI)," adding, "Jabhat al-Nusra is an autonomous branch of Jamaat al-Qaeda al-Jihad [i.e., al-Qaeda] and follows its general leadership." Zawahri further said, "The realm of ISI is Iraq, and that of Jabhat al-Nusra is Syria." Zawahri's statements supported Jabhat al-Nusra leader Abu Mohammed al-Golani's demand that his group remain independent of Baghdadi in Syria and that he withdraw from al-Qaeda's branch in Iraq.

Golani then issued a statement in response to Baghdadi, claming that he had not been consulted and that senior "Nusra scholars" had only heard about the alleged merger through the media. Golani refused to bow to Baghdadi's authority, sparking confusion among jihadists in Syria and causing divisions among Jabhat al-Nusra fighters, who are considered the strongest and most influential armed group confronting the Syrian regime. Golani announced that he was renewing his allegiance to Zawahri, stating that his previous allegiance to Baghdadi had resulted from the latter's position as a representative of Zawahri in Iraq. Meanwhile, Baghdadi claimed that Golani had pledged allegiance to him while he was working under his command in Iraq and that he had been the one who appointed Golani emir of a group of jihadists sent to Syria to fight. This was before Jabhat al-Nusra expanded to include jihadists from Syria as well as other Arab and non-Arab states.

Experts on jihadist groups disagree on whether Zawahri's audio recording was new or somewhat old but only issued recently. In a phone interview with Al-Monitor, Hassan Abu Haniyeh, a Jordanian researcher specializing in Islamic movements, said that the contents of the audio recording contained nothing new. Rather, they repeat what Zawahri had stated in May 2013 in a letter to Baghdadi (as ISI leader) and Golani (as Jabhat al-Nusra's leader) that was posted on jihadist websites. In the letter, Zawahri had ruled on the dispute between the two men by abolishing the merger that Baghdadi had announced and Golani had rejected. Abu Haniyeh therefore believes that the recording is old, but recently leaked.

Mohammed Allouch, a Lebanese researcher specializing in Islamic movements, told Al-Monitor that he was not surprised by Zawahri's statement. He believes that while the contents of the statement are old, and merely repeat what Zawahri had said in a message issued in May 2013, the recording is new. He thinks that it was issued to assist Golani in light of the growing disputes between ISIS on the one hand and Jabhat al-Nusra and other Syrian factions on the other.

Sheikh Omar Bakri, a Lebanese Salafist and expert on Salafist jihadist movements, asserts that Zawahri's statements in the recording had been proposed by him months prior in his letter to Baghdadi and Golani. In a news statement, Bakri contended, "What [Zawahri] stated, in regards to ISIS being disbanded and Jabhat al-Nusra remaining independent, was merely a suggestion that was not implemented. Both organizations — ISIS and Jabhat al-Nusra — continued their work in Syria and coordinated operations."

Bakri also noted that jihadist leaders — including Jordanian Abu Mohammed al-Maqdisi and Palestinian-Jordanian Omar Othman, known as Abu Qatada and currently imprisoned in Jordan — had proposed forming a "shura council" for jihadists in Syria consisting of representatives from each faction. According to this proposal, Abu Khalid al-Souri, nominated by Zawahri, would arbitrate among them, while each faction would remain independent.

Abu Haniyeh said that Baghdadi had ignored Zawahri and in his May 2013 letter accused him of violating Sharia. In an audio recording, Baghdadi asserted, "I have to choose between the rule of God and the rule of Zawahri, and I choose the rule of God."

Abu Haniyeh pointed out that Zawahri is not a charismatic figure like Osama bin Laden, and there is no consensus on his leadership. He also said that al-Qaeda is no longer an elite, centralized organization with a globalized agenda, as was the case in the 1990s. The killing of bin Laden in May 2011 contributed to the disintegration of the organization's central leadership and the emergence of a new approach of opposing the West in indirect ways. This involves building popular local networks under the name Ansar al-Sharia, paving the way for the development of united regional jihadist networks based on a strategy of integrating global and local dimensions. This means combining the fight against the "close" enemy" (Arab and Muslim ruling regimes) and the "far enemy" (the United States, the West and Israel).

Abu Haniyeh notes that the Arab Spring revolutions have resulted in the collapse of some regimes hostile to al-Qaeda and weakened others. According to him, al-Qaeda's new strategy is based around its local branches, where new groups have emerged that share the organization's Salafist jihadist ideology and its long-term goals of establishing an Islamic caliphate, eliminating Western dominance, and confronting Israel.

Allouch believes that following Zawahri's statement and ISIS's refusal to accept his decision, Salafist jihadism is entering a new stage that will see new leaders increasingly willing to turn against the traditional leadership. This possibly portends the emergence of a new extremism more severe than that represented by the "original al-Qaeda" that emerged in Afghanistan. Allouch observed that the dispute between Zawahri and Baghdadi, and between ISIS and Jabhat al-Nusra, is an ideological and political disagreement related to the issues of allegiance, the timing of the establishment of an Islamic state, and other priorities. Everyone involved, however, continues to agree on the general objectives upon which al-Qaeda was founded.

Allouch thinks the dispute will spread hostilities and will be reflected in future events in the Arab Maghreb as well as in al-Qaeda's activities in the West. He contends that a new stage featuring additional rifts might be forthcoming among these organizations, developing into a generation divided in addition to being more radical and extremist.

Zawahri's message noted that he had extended Baghdadi's mandate for the Iraqi al-Qaeda branch and Golani's mandate for the Syrian branch for a year. Following this period, he will decide, based on the report of al-Qaeda's Shura Council, whether to extend these mandates or choose a successor for them.

Islamist researcher Moussa al-Ghannami said that one of the reasons for Zawahri dispatching an audio message is the division between the two groups and ISIS's attacks against Jabhat al-Nusra headquarters and other Islamic factions in Syria. Ghannami noted that ISIS had assassinated a number of officials from Islamist factions and carried out other assaults. Moreover, Baghdadi could kill Golani and Abu Maraya al-Qahtani, Jabhat al-Nusra's chief legal adviser, under the pretext that they had broken their allegiance and split with Islamist ranks. Golani has gone into hiding, while Abu Maraya has survived several assassination attempts, Ghannami noted.

Without revealing the source of his information, Ghannami asserted that senior ISIS legal and military officials had met with Baghdadi and had agreed to cancel the name "Islamic State of Iraq and al-Sham" and declare the "State of the Islamic Caliphate" and had received pledges of allegiance from al-Qaeda groups in Tunisia, Libya, the Sinai and Somalia. A statement was supposed to have been issued declaring the caliphate, with the pledges of allegiance to Baghdadi to follow along with his being appointed the emir of the faithful. Baghdadi's supporters tried to obtain allegiance from Ansar al-Sharia in Yemen and al-Qaeda followers in Mali, but they refused and informed Zawahri of the matter. Thus, bin Laden's successor rushed to issue the old audio statement to block the move and to clear up any doubts regarding his handwritten letter.

Some researchers expect that Zawahri's message will strengthen Jabhat al-Nusra and further weaken ISIS, which because of its practices in the areas it controls, Raqqa and Aleppo, has generated resentment among residents. ISIS had beheaded alleged dissidents and imposed Sharia law on the populace. Furthermore, the message will exacerbate the dispute between the two groups, pushing them in the direction of fighting one another. ISIS remains the strongest opposition group in Syria, having surpassed Jabhat al-Nusra in terms of equipment and number of fighters. It is estimated that ISIS has about 8,000 fighters, with Syrians constituting 60% of them.