Contrary to his predecessors, Islamic State of Iraq and al-Sham (ISIS) leader Abu Bakr al-Baghdadi has proven to be more pragmatic and devious. 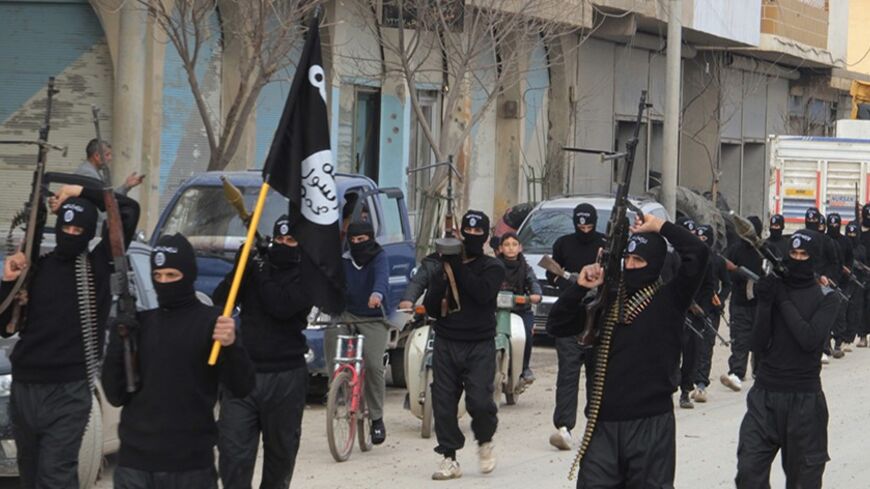 Fighters of the Islamic State of Iraq and al-Sham (ISIS) carry their weapons during a parade at the Syrian town of Tel Abyad, near the border with Turkey, Jan. 2, 2014. - REUTERS/Yaser Al-Khodor

The picture released by the Iraqi Interior Ministry on Jan. 29 of the leader of the Islamic State of Iraq and al-Sham (ISIS) Abu Bakr al-Baghdadi was a first-of-its-kind breakthrough since US forces showed a picture of him when he was detained in Bucca prison (southern Iraq) between 2005 and 2009.

According to information available from al-Qaeda and from leaks from the Iraqi Interior Ministry, Baghdadi’s actual name is Ibrahim Awwad Ibrahim Ali al-Badri al-Samarrai.

According to unconfirmed sources, Baghdadi was born in 1971, and earned a doctorate in Islamic studies from the Islamic University in Baghdad. Some sources said that he worked as a professor of Sharia before becoming a Salafist preacher. In Diyala province, he founded an armed group named Jaish Ahl-Sunna wal Jamaa, which never became well-known.

Sources disagree about whether or not he joined the Mujahedeen Shura Council, which was founded by a group linked to al-Qaeda in 2006, with many sources saying he was a member in this council.

But this possibility doesn’t agree with Baghdadi’s arrest and detention by the US military in Bucca prison in 2005, or with the council’s official announcement of its founding, which included six armed factions: al-Qaeda fi Bilad al-Rafidayn, Jaish al-Ta’ifa al-Mansoura, Saraya Ansar al-Tawhid, Saraya al-Jihad al-Islami, Saraya al-Ghuraba, and Kataeb al-Ahwal. While Jaish Ahl-Sunna wal Jamaa was not among these groups, some leaks claimed that Baghdadi was originally part of Saraya al-Jihad al-Islami.

There is conflicting information regarding Baghdadi and his history as a fighter. While some say he was a peasant who turned leader after being trained by al-Qaeda members inside Bocca prison, others claim he was a Salafist activist who was known even by the former regime and who left Iraq for Afghanistan and was close of Abu Musab al-Zarqawi. Yet regardless of the accuracy of this information, he is a mysterious and significant mark in the structural evolution of al-Qaeda in Iraq.

Baghdadi took over leadership of al-Qaeda, which was then operating in Iraq under the name the of Islamic State of Iraq (ISI), after the killing of its former leader Abu Omar al-Baghdadi, aka Hamed al-Zawi, in mid-2010, when ISI was collapsing. In 2010, the level of violence had significantly declined relative to prior years. 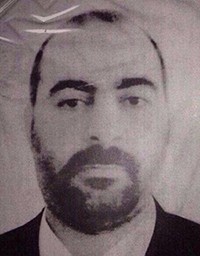 In addition to what is being reported, without proof, about Baghdadi’s organizational capacity, he has adopted in the first few months after taking over what can be called an “organized withdrawal.” And despite that he maintained his predecessor’s methods of conducting sporadic and carefully planned attacks that drew media attention, those methods quickly changed starting at the end of 2011. These changes suggested strategic changes in the way ISIS operated: they conducted large storming operations of prisons, tried to occupy state posts and build outposts in desert areas.

It is clear that Baghdadi’s thinking and methods were closer to those of Abu Musab al-Zarqawi than to Abu Omar al-Baghdadi. Zarqawi favored direct war, occupying cities, and imposing direct al-Qaeda rule on them. On the other hand, Abu Omar al-Baghdadi preferred that his organization’s member not appear in public and limited his actions to coordinated attacks on institutions or markets in several cities to cause the biggest possible impact while maintaining the organization’s confidential nature.

Perhaps the mystery surrounding Abu Bakr al-Baghdadi — at the level of his personality, his movements, or even his relatives, his family, and those close to him — came as a result of what happened to the organization’s previous leaders, who were killed (the first by an air strike in Diyala in 2006 and the second in a well-planned military operation in al-Tharthar in 2010) after their movements were detected.

An investigating officer working in the fight against terrorism in Iraq asserted to Al-Monitor that the mystery surrounding Baghdadi is because “Baghdadi was keen to keep his movements very limited. He limited his contacts to a few members who know him directly. Many of the [released] detainees who are members of the organization, some of them in the leadership, have either never met Baghdadi or met him while he was wearing a face cover.”

This information gives a clearer picture about how Baghdadi protects himself, even from his followers, and makes the recently captured photos and the documents having his handwriting a security breakthrough. This, in turn, suggests that the changes in Syria, whereby Baghdadi announced ISIS’s founding and the bone-breaking battle with Jabhat al-Nusra (the Syrian arm of al-Qaeda, which is led by Ayman al-Zawahri), were all factors that contributed to Baghdadi abandoning his personal secrecy.

To gain legitimacy, Baghdadi fought against Jabhat al-Nusra’s emir Abu Mohammed al-Golani and then against the leader of the global al-Qaeda organization Ayman al-Zawahri over the right to fight in Syria and the right to demand allegiance from the rest of the factions consisting of Arab, foreign, and local fighters. That fight required, in addition to a show of military capability on the ground, a capability to market ISIS’s Sharia views by paying due attention to ideology when marketing the organization, as evidenced by the speeches and messages exchanged between Golani, Baghdadi and Zawahri. Those exchanges were discussed on jihadist forums and social media sites to assess Baghdadi’s legitimate right to lead.

In truth, rhetorical ability was not the only factor that allowed Baghdadi to challenge Zawahri in mid-2013. In fact, the period from 2010, when Baghdadi took over the leadership of the organization in Iraq, till his announcement of ISIS’s founding, Baghdadi was already restructuring his organization and getting additional resources in two ways:

The ISIS experience in Syria made Baghdadi’s dream come true. For the first time in years, Baghdadi was able to pacify whole Syrian regions, form military formations, establish publicly known headquarters and establish religious courts. The existence of safe ISIS premises in wide and protected areas has changed ISIS’s style and mechanisms, so much so that there have been strong suspicions that Baghdadi moved his residence and leadership to the areas he controls in northwest Syria.

Despite the coup against him by armed factions, some of which are under Zawahri’s command, such as Jabhat al-Nusra and others, Baghdadi doesn’t seem ready to give up his precious gains, especially in areas adjacent to Iraqi borders. The outbreak of the Anbar crisis was his chance to open the borders, expand his control and benefit from the potential financial and human resources in Iraq.

If Baghdadi can be described as “devious,” then this description is especially appropriate in the past few weeks. This is not only because of the way he is managing the military operations in Anbar and distracting the government forces on different fronts, but also because he is avoiding provoking the people who have bad memories of al-Qaeda.

Until now, Baghdadi’s fighters have not harmed religious men, the Anbar tribes, including those who formed the Sahwa forces, or even the police force. When the tribes refused to raise ISIS banners in Fallujah, he ordered his fighters not to raise the banner and try to co-opt the fighters of armed groups, clans or religious men. Sources inside Fallujah told Al-Monitor that not raising the banners meant that tribal leaders could deny the existence of ISIS in Fallujah.

However, the banner did appear on certain occasions, such as when ISIS kidnapped and killed a number of Iraqi soldiers in the area of Albu Bali in north Fallujah in mid-January of this year.

Baghdadi’s appeasement policies in Anbar have once again revealed a pragmatism that was lacking in al-Qaeda’s previous leaders. This is probably one of the reasons why the Anbar crisis has not yet been resolved.

However, on Feb. 3 al-Qaeda announced that it has no links with ISIS, because the mother organization of al-Qaeda was not informed when it was established. Moreover, al-Qaeda contended it did not give orders to ISIS and was not consulted by it. Al-Qaeda said it was not pleased by ISIS's actions, and had even ordered it to stop its operations.