As al-Qaeda and its various branches take advantage of instability throughout the Middle East, Jabhat al-Nusra in Syria and the Islamic State of Iraq have seen rifts between themselves recently. 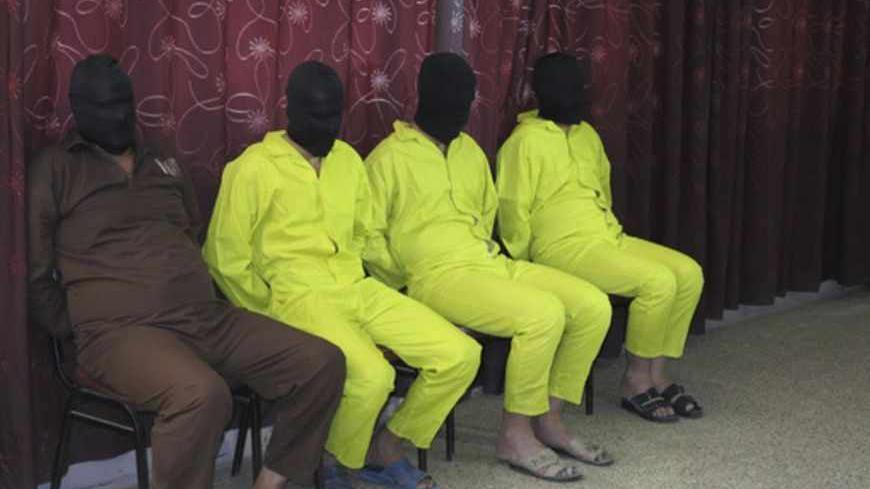 Detainees suspected of being part of an armed cell with links to al-Qaeda are shown to the media during a news conference at the Defense Ministry in Baghdad, June 1, 2013. - REUTERS

The disputes that have erupted between the two fronts of al-Qaeda in Iraq and Syria — the Islamic State of Iraq and Jabhat al-Nusra — which necessitated the intervention of the leader of the international organization, Ayman al-Zawahri, did not give much cause for optimism in Iraq about a possible major divide in the ranks of the organization across the border.

Zawahri spoke of what he called “the geographical scope of the Islamic State of Iraq in Iraq, and that of Jabhat al-Nusra in Syria.” He said that this arrangement was more of an organizational process rather than an ideological separation. However, he stressed that the extreme armed forces that are active in Iraq are subject to defections, on different bases.

It is important to mention that the national or “geographical” scope, as dubbed by Zawahri, was one of the main reasons that al-Qaeda chose an Iraqi (Abu Bakr al-Baghdadi who was preceded by Abu Omar al-Baghdadi) for the leadership of the organization, following the death of Jordanian militant Abu Musab al-Zarqawi in 2006.

Nevertheless, differences over the Iraqi aspect of the Islamist organization had broken out in the early times of al-Qaeda, when the Mujahideen Shura Council was established in 2006 as a solution to the identity conflict that erupted since the formation of the armed Iraqi group in 2003.

However, in light of the latest events in Syria, especially after the battles of Qusair, which have tipped the balance in favor of the regime, new question marks hang over the fate of al-Qaeda’s alliances across the Iraqi border.

Zawahri’s message was most likely a response to the changes that took place on the ground. After contacts between the two sides, it has been proven that the relations need to be reorganized, which raises the same problem once again: Iraq’s stance regarding these developments and the developments of the Syrian crisis as a whole.

There is a strange paradox surrounding the Syrian war’s effects on the Iraqi arena, as Iraq has previously expressed its fears of the potential victory of the Syrian opposition over the regime of President Bashar al-Assad.

Although these fears have been more prominent over the past months among Shiite leaders, who are practically taking up the reins of power in the country, these forces should not feel comfortable about the prospects of the Syrian regime’s victory.

Indeed, Iraqi leaders fear that any future Syrian government “would be made of extremist parties that would be hostile toward Iraq on a sectarian basis.” This sentiment has been expressed by senior Iraqi leaders on various occassions since the beginning of the Syrian crisis two years ago, and in an interview with Reuters on Nov. 25, 2011, Iraqi President Jalal Talabani noted that [the Iraqi government] was concerned about extremists coming to power in Syria.

On the other hand, they are apprehensive that — if the Syrian regime defeats the opposition — the regime would be obliged to push extremist armed forces into Iraq once again and play the game of cat and mouse with the Iraqi government once more.

On the ground, the support of the Islamic State of Iraq for the insurgency in Syria has had little effect on the momentum of the insurgency in Iraq. In fact, over the past months, al-Qaeda has proved to be strongly present in the Iraqi arena, capable of causing large-scale attacks and claiming the lives hundreds of victims.

This reality, however, does not change the fact that developments taking place to the advantage of the Assad regime would lead to many fighters going back to Iraq, as stated recently by Iraqi security officials.

This paradox reflects the effects of the Syrian impasse on Iraq and highlights a serious dilemma:  Iraq will continue to be influenced not only by domestic events but also by developments taking place beyond its borders.

Iraq cannot really count on the dispute between the two branches of al-Qaeda in Syria and Iraq. It could nevertheless take advantage of the developments of the Syrian conflict on the ground to take impartial stances so as to distance itself from the crisis, which would be the only means to protect itself during the next phase.

According to Iraqi officials, Iraq will not be a friend to extremist armed groups in Syria, nor will it hold close ties with a regime that has gone too far, shedding the blood of its own people.