Idlib's displaced traumatized by operation that killed IS leader

Residents of the displacement camps near the site of the recent US operation that killed IS leader Abu Ibrahim al-Hashimi al-Qurayshi are still terrified of not only a possible return by the Islamic State, but also by the US-led coalition. 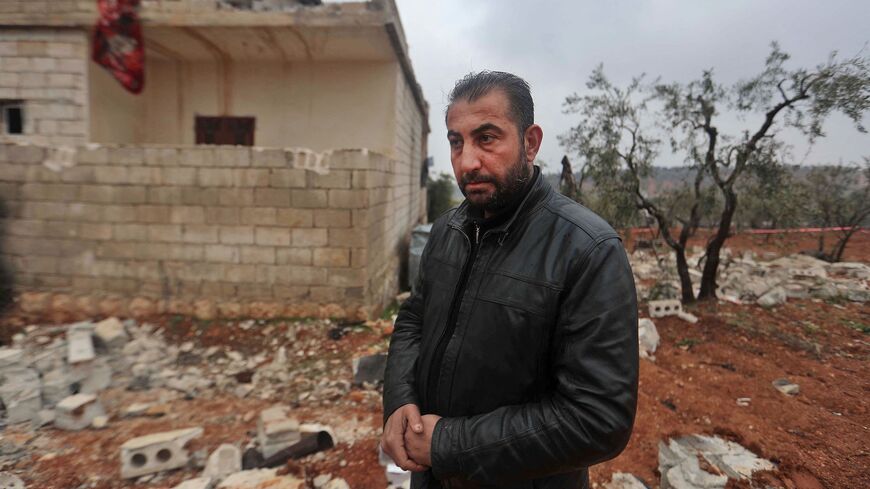 A neighbor of the residence in which the Islamic State leader Abu Ibrahim al-Hashimi al-Qurashi died during a raid by US special forces is pictured near the house in the town of Atme in Syria's northwestern province of Idlib on Feb. 4, 2022. - AAREF WATAD/AFP via Getty Images

Following the Feb. 3 US special forces operation that led to the death of Islamic State leader Abu Ibrahim al-Hashimi al-Qurayshi in northwest Syria, civilians in Idlib have been growing more concerned about a possible return of IS, especially the residents of the displaced camps in the border town of Atmeh and the house where Qurayshi died during the raid.

Much seems to hinge on Hayat Tahrir al-Sham (HTS), which controls Idlib province.

HTS has not commented on the US operation. Meanwhile, the group’s leader, Abu Mohammed al-Golani, continues to try to gain the people’s trust in Idlib, visiting displaced camps dressed in modern clothing and donating an estimated $1 million to the inhabitants.

But HTS’ efforts to appear moderate before the international community have failed in the aftermath of the US raid. Some observers say the killing of Qurayshi, and before him Abu Bakr al-Baghdadi in 2019, in the areas under HTS’ control indicate that the group has been protecting IS.

Speaking to Al-Monitor, Muhammad Hajj Kaddour, a journalist who lives in one of the Atmeh camps, commented, “I have mixed feelings. On the one hand, [the operation] made me happy since IS is a terrorist organization that destroyed the Syrian revolution. One the other hand, as a journalist who prepared an investigative report on the day of the operation, I received reports from some of my neighbors who were near the targeted place that night and they were very terrified, especially one woman who reported being beaten and insulted by the [US-led] coalition.”

“These soldiers are supposedly here to fight terrorism and the terrorist organization. I thought they are supposed to treat civilians and the residents of the nearby camp better. I was very annoyed that civilians were terrified by the coalition,” he added.

Commenting on whether he fears IS’ return, Kaddour said, “I am not worried at all, because I believe that this terrorist organization has ended and disappeared for good.”

A 60-year-old resident of a Atmeh camp using the pseudonym Umm Seif for security concerns told Al-Monitor, “We are very anxious because of the recent operation and we fear IS’ return. We fled the Syrian regime bombings in the Idlib countryside two years ago and found refuge in these camps because we thought that they are safer despite the hot summers, cold winters and slow death.”

She said, “We are very afraid for our children and for the women here. We are still distraught from the day of the incident as we did not know what was happening. The neighbors in the camp started saying that it was IS and its leader. The children woke up terrified since we haven’t heard the sound of bombardment in months.”

Umm Seif went on, “I am over worried. And I’m not the only one who has this much anxiety here. All of the people in the camp — children, women and even the men — have been troubled and concerned for the past two days.”

She said that everyone is afraid of being displaced again: “That is our greatest concern. If these operations are repeated, we will have to go, but where? We do not know!”

She added, “Innocent people are always the ones who pay the cost. Children and women who have nothing to do with everything going on are the victims.”

It appears that none of the people in the camps knew that Qurayshi lived nearby.

The Associated Press reported Feb. 4 that the landlord of the raided house “said he was ‘shocked’ by his tenant's identity. Musab al-Sheikh thought he had rented his house to a displaced car dealer from the northern province of Aleppo and had no idea that the leader of the Islamic State group was living in the three-storey house he owns in the northwestern Syrian town of Atmeh.”

The report went on, “The man, who is believed to have been a top aide to IS leader, always paid on time during the time he stayed in the house paying $130 a month. The man in his early 40s later said he wants to bring his sister to live on the top floor and she did. No one knew that among the people who moved in was IS top leader Abu Ibrahim al-Hashimi al-Qurayshi, who was killed in a US raid on the safehouse in Atmeh.”

According to the inhabitants of the Atmeh camps where hundreds of families live, there is no safe place left for them.

On the day of the raid, US President Joe Biden said his country will continue to hunt down jihadists in the world.

According to the White House, Qurayshi set off a bomb that killed himself and his family members, including women and children.

The Syrian Observatory for Human Rights said at least 13 people, including four children and three women, were killed during the raid, which began shortly after midnight on Feb. 3 and prompted more than two hours of fighting.

HTS and other less influential factions control about 50% of Idlib and parts of neighboring governorates. The extremist group Hurras al-Din, affiliated with al-Qaeda, is also active in the area where about 3 million people live, nearly half of whom are displaced from other parts of the country.