Yazidis react to the death of Abu Ibrahim al-Hashimi al-Qurayshi, who played a central role in orchestrating the slaughter and trafficking of the minority group. 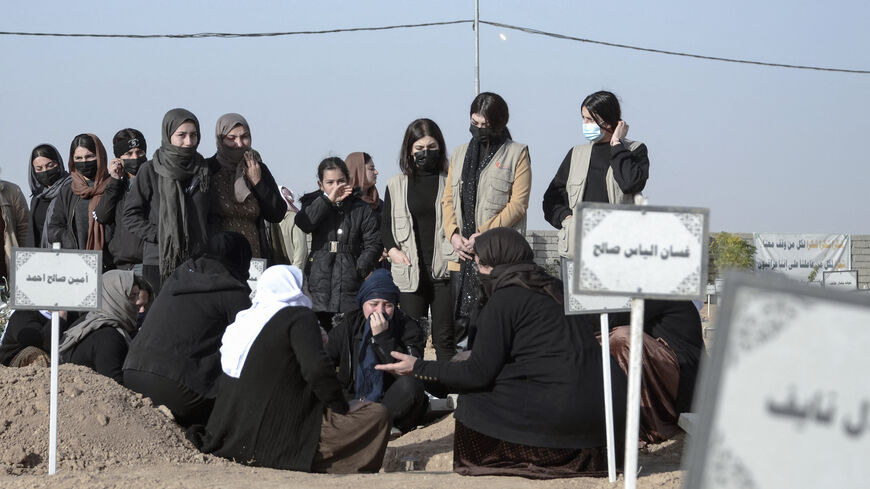 Women mourn by a grave during a mass funeral for Yazidi victims of the Islamic State whose remains were found in a mass grave, in the northern Iraqi village of Kojo in Sinjar district, on Dec. 9, 2021. - ZAID AL-OBEIDI/AFP via Getty Images

For survivors of the Islamic State massacre against Iraq’s long-persecuted Yazidi minority, the death of terrorist leader Abu Ibrahim al-Hashimi al-Qurayshi brought some relief but little solace. More than seven years after al-Qurayshi oversaw a genocide against the Yazidis, countless other IS members go unpunished.

“There is more that must be done,” Yazidi activist and Nobel Peace Prize laureate Nadia Murad said in a statement.

“The international community’s apathy towards these atrocities had left the community with little hope for justice and accountability. Until today,” she said.

President Joe Biden announced today that al-Qurayshi, also known as Hajji Abdullah, was killed during an overnight raid carried out by US special forces outside the northwest Syrian town of Atmeh. The reclusive IS chief died after detonating a bomb inside his residence that also killed his wife and children, US officials said.

In remarks at the White House, Biden described al-Qurayshi as the “driving force” behind the 2014 genocide against the Yazidis, a mostly Kurdish-speaking minority group that practices an ancient monotheistic religion and calls Iraq’s mountainous Sinar region home.

“We all remember the gut-wrenching stories of mass slaughters that wiped out entire villages. Thousands of women and young girls sold into slavery. Rape used as a weapon of war,” said Biden.

The Commission for International Justice and Accountability described al-Qurayshi as a senior ideologue within IS and a “key architect” of the Yazidi slave trade who personally enslaved and raped captive women.

The nonprofit group of legal experts, which has collected evidence against al-Qurayshi since 2015, said he oversaw the distribution of sabaya (female spoils of war) to IS members and was responsible for all Yazidi prisoners captured during the terrorists' rampage on Sinjar.

Today, more than 2,700 of those women and children remain missing and are feared dead. Some 200,000 Yazidis are internally displaced inside Iraq, with many who escaped the IS onslaught afraid to return to their homeland.

Pari Ibrahim, executive director of the advocacy group Free Yezidi Foundation, applauded the American raid on the IS leader’s hideout, and said that every effort must be made to apprehend those who took part in what the United Nations and United States have deemed genocide.

“We must bear in mind that there are tens of thousands of IS members that are still alive, including in Iraq, Syria, and around the world,” Ibrahim said. “These are people who traded Yazidis in literal slave markets and arranged for the purchases and rapes of Yazidi women and girls as young as eight years old.”

Despite an overwhelming body of evidence documenting IS atrocities against the Yazidis, meaningful justice remains out of reach. The international community has been unwilling to hold Nuremberg-like trials, and many Western governments have refused to repatriate and prosecute their foreign fighters.

European domestic courts have offered a glimmer of accountability. In November, a court in Germany handed a life sentence to an Iraqi man convicted of genocide against the Yazidis, but such cases are few and far between.

In Iraq, thousands of suspected IS members have gone to trial on broad terrorism-related charges, but rarely for specific crimes committed against the Yazidis, such as rape and kidnapping. In northeast Syria, the US-backed Syrian Democratic Forces has repeatedly called for help detaining and prosecuting the roughly 10,000 suspected IS fighters the SDF is holding in its makeshift prisons.

Last month's deadly prison break in Hasakah, Syria renewed fears of an IS resurgence, especially among Yazidis who say they remain under threat from extremists who view them as devil worshippers. Yazidi activist Murad Ismael believes that a “sustainable victory” against the group will require holding IS fighters accountable for their crimes.

“The inability to create a court takes away the opportunity to expose the ideology and [will] allow IS to recruit once again,” said Ismael, the co-founder and president of the Sinjar Academy in northern Iraq.

Al-Qurayshi blew himself up during the early morning raid Thursday, denying law enforcement the chance to collect testimony that could have helped bring other members of the group to justice. Natia Navrouzov, the legal advocacy director at Yazda, called for IS leaders to be captured alive and prosecuted whenever possible.

“Only then will Yazidi survivors feel that meaningful justice is pursued,” Navrouzov said.