The death of ISIS’s ‘Hajji Abdullah’: Views from Idlib, Iraq and more 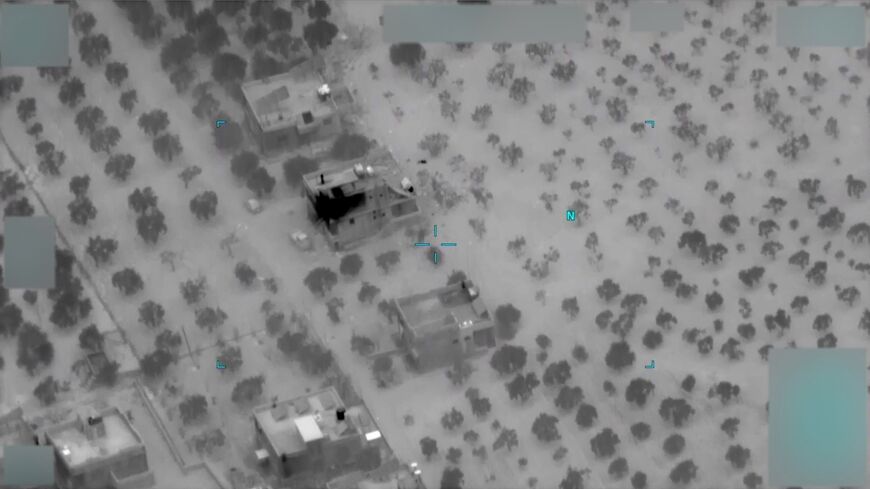 This handout provided by the US Department of Defense shows the compound housing ISIS leader Abu Ibrahim al-Hashimi al-Qurayshi in northwest Syria after a raid executed by U.S. special forces, Feb. 2, 2022 in Atmeh, Syria. It was reported that al-Qurayshi detonated an explosive device during the operation, killing himself and members of his family. - US Department of Defense via Getty Images

The Feb. 3 US Special Forces operation that led to the death of Islamic State leader Abu Ibrahim al-Hashimi al-Qurayshi, known as Hajji Abdullah, was another major blow against the terrorist group, which was operating from Idlib, Syria. Jared Szuba has the report from Washington here.

We have written several times that Operation Inherent Resolve, as the US-led international diplomatic and military mission to defeat Islamic State (D-ISIS) is known, has been a success story since it was launched by the Obama administration in 2014 to strike the terrorist organization through coalition diplomacy and military operations.

Despite its success, the mission often doesn’t get the credit it deserves, especially amid steady criticism from some in the US, as well as throughout the region, that Washington is stepping back from its commitments in the Middle East.

The record shows otherwise. D-ISIS is a textbook US strategic mission that has backing from leaders in both parties in Congress and across three administrations (both Democrat and Republican), has involved fluid diplomatic and military coordination, and involves 83 coalition partners. Check out our brief timeline below.

2014: The Islamic State overruns large parts of Syria and Iraq, seizing both Raqqa, the seventh largest city in Syria, and Mosul, the third largest city in Iraq, and murdering, raping, torturing, and enslaving those who challenged them. US begins military mission and diplomatic campaign against IS in Iraq and Syria.

2019: In March, the US declares the “territorial defeat” of Islamic State. In October, US forces kill IS leader Abu Bakr al-Baghdadi in Idlib province, Syria; he is replaced by Qurayshi.

2021: On Dec. 31, the US mission in Iraq, which includes 2,500 US forces, shifts to “training, advising and intelligence gathering” in fighting IS, meaning they will carry out only attacks of unusual complexity and a “higher level of operational maturity.”

2022: The Pentagon warns that in Syria IS appeared to be consolidating in the desert and poised for increased activity in “the next stage of its insurgency.” The US maintains 900 troops in Iraq, working with and through the Syrian Democratic Forces (SDF), which by themselves “lacked the ability to conduct persistent surveillance or maintain situational awareness.”

The view from Idlib: the ‘screams were traumatizing’

Mouneb Taim has the report for Al-Monitor from Idlib, where the latest operation took place in the pre-dawn hours. Locals at Atmeh camp (near the site of the raid on Qurayshi’s headquarters) were shocked.

Fahd al-Khal, a young man who was displaced from the Idlib countryside to the Atmeh camp, told Al-Monitor, “We woke up terrified at around 1 a.m. Turkish soldiers came running, struggling to warn us in Arabic and asking all civilians to evacuate the area. The raids lasted for over two hours and they kept getting closer and closer; it was terrifying.”

“… We could not count how many helicopters there were, but the sound of shelling, mixed with the sirens and the people’s screams were traumatizing. Two parties were obviously clashing. The shelling then reached the house in which I live with my family in Atmeh camp. It was chaotic and random. We had children in the house so we were naturally scared for our lives.”

“We all remember the gut-wrenching stories of mass slaughters that wiped out entire villages. Thousands of women and young girls sold into slavery. Rape used as a weapon of war,” said Biden.

For the Yazidis, there is more to be done to deliver justice against Islamic State perpetrators of the genocide and related crimes, as Elizabeth Hagedorn reports.

More than 2,700 “women and children remain missing and are feared dead. Some 200,000 Yazidis are internally displaced inside Iraq, with many who escaped the IS onslaught afraid to return to their homeland,” adds Hagedorn.

Iraqi officials clamp down on border with Syria

Shelly Kittleson reports from Iraq on the links between the raid on Qurayshi and the escape of hundreds of alleged IS fighters, including many Iraqi nationals, after an IS attack on detention facilities in northeastern Syria in late January. Iraq says it has stepped up control of its western border.

“The focus has been on Ninevah province,” the birthplace of Qurayshi, writes Kittleson. “The Iraqi intelligence services had, allegedly with the assistance of their Turkish counterparts, captured a close associate of Qurayshi in October 2021 and brought him back to the country for interrogation,” adds Kittleson.

Biden said Thursdy that Qurayshi’s death would send a message to terrorists worldwide: “We will come after you and find you.”

Check out our list here of those terrorists whose whereabouts are sought by the United States, including Hayat Tahrir al-Sham (HTS) leader Abu Mohammed al-Golani, who attended a public event in Idlib on Jan. 7 in western clothes, “displaying zero concerns about being targeted by the international coalition warplanes that pursue extremist leaders in northern Syria,” as Mouneb Taim reports from Idlib.

Elsewhere: Erdogan looks for a role in Ukraine crisis

Turkish President Recep Tayyip Erdogan made the case for himself as a potential mediator in the Ukraine crisis during a visit to Kyiv on Feb. 3, leveraging his and Turkey’s good relations with both Ukraine President Volodymyr Zelenskyy and Russian President Vladimir Putin.

Erdogan’s hook for diplomacy is the Minsk Accords, brokered by France and Germany in 2015, which Kyiv says favor Russian interests in eastern Ukraine, as we report here. Moscow would support a negotiation based on the Minsk agreement.

Erdogan and Zelenskyy also signed a free trade agreement and another to expand production of Turkish-made drones that Ukraine has used against Russian-backed forces in the east.

Amberin Zaman, reporting from Kyiv, also highlighted the role of Crimea’s Tartars, an ethnic Turkic group, in Erdogan’s approach to the conflict.

Erdogan said that he raised with Zelenskyy “the plight of Crimean Tatars” who form “a historical bridge of friendship between our two countries.”

“We continue to support the sovereignty and territorial integrity of Ukraine, including Crimea. Common projects involving our ethnic [Crimean Tatar] kin were evaluated in detail,” he added.