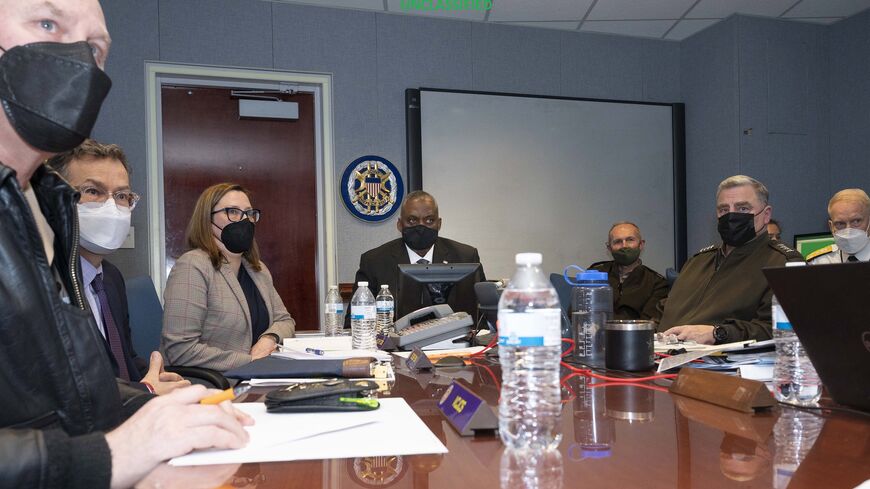 In this handout provided by the US Department of Defense, Secretary of Defense Lloyd J. Austin III (C) and Chairman of the Joint Chiefs of Staff Mark A. Milley (2R) appear in the National Military Command Center of the Pentagon as they oversee the raid against IS leader Abu Ibrahim al-Hashimi al-Qurayshi on Feb. 2, 2022, in Arlington, Virginia. - Lisa Ferdinando/US Department of Defense via Getty Images

According to the latest Pentagon Inspector General report, the Islamic State "claimed fewer attacks in Iraq and Syria but remained entrenched in remote, rugged areas."

IS also continued to provoke sectarian, ethnic and tribal divisions in both Iraq and Syria. In Iraq, IS attacks increased in areas disputed between the federal government and the Kurdistan region.

The quarterly report on Operation Inherent Resolve, the name of the US military mission to defeat IS in Iraq and Syria and set conditions for long-term security cooperation, covers the period from Oct. 1 to Dec. 31, 2021. The report was published on Feb. 8, just five days after the US special forces operation in Idlib province in northern Syria that led to the death of IS leader Abu Ibrahim al-Hashimi al-Qurayshi.

Killing of Qurayhsi leads to questions on Turkish role

US President Joe Biden praised the "essential partnership" of the SDF in carrying out the operation that killed Qurayhsi. He also mentioned the Iraqi security forces and the Iraqi Kurdish Peshmerga.

Conspicuously not mentioned was any Turkish role in the operation, even though "Qurayshi was hiding in a house near the northern Syrian town of Atmeh, a stone’s throw from the border across the Turkish province of Hatay and only a few hundred meters from Turkey’s Bukulmez military outpost, which overlooks the region," writes Fehim Tastekin.

Although the region is out of the control of Turkey and its proxy forces in Syria, "Atmeh and nearby villages can be easily monitored from the military watchtower at Bukulmez outpost," adds Tastekin, and "Given the intelligence leaks that suggest Qurayshi was also relying on a web of couriers to lead the group like his predecessor, Turkey’s failure to identify the suspicious mobility in the region is raising further questions."

"According to Kasim Guler, the alleged IS leader for Turkey whose confessions to the Turkish authorities were leaked to the media last week, [former IS leader Abu Bakr] al-Baghdadi had made a decision to use Turkey as a major base."

Other accounts paint a more active and complex picture of Turkish counter-IS operations.

The Pentagon report noted that according to "media accounts," Turkey and Turkish-supported Syrian armed opposition groups "conducted operations against ISIS during the quarter in areas they control" and "Turkish intelligence assisted Iraq in the capture of senior ISIS leader Sami Jasim in northwestern Syria."

Khaled al-Khateb reported from Aleppo less than a week before the Qurayshi operation, "The Turkish-backed Syrian opposition has waged a security campaign against Islamic State cells in Azaz in the northern Aleppo countryside since Jan. 20, leading to the arrest of dozens of IS members and collaborators. The hunt for other members is expected to continue through the confessions of their fellows."

Idlib province, where the operation against Qurayshi took place, is mostly under the control of the "Salvation Government" led by Jihadist group Hayat Tahrir Al-Sham (HTS), an offshoot of al-Qaeda that was designated a terrorist organization in 2018 by the United States, Turkey, and the UN Security Council.

HTS claims it has cut ties with al-Qaeda and its leader, Mohammed al-Golani, has been on a public relations campaign the past two years to shake the terrorist label and reposition HTS as freedom fighters holding the line against the Syrian government, shedding his robes and ideological rhetoric for Western suits.

Five updates from our regional reporters